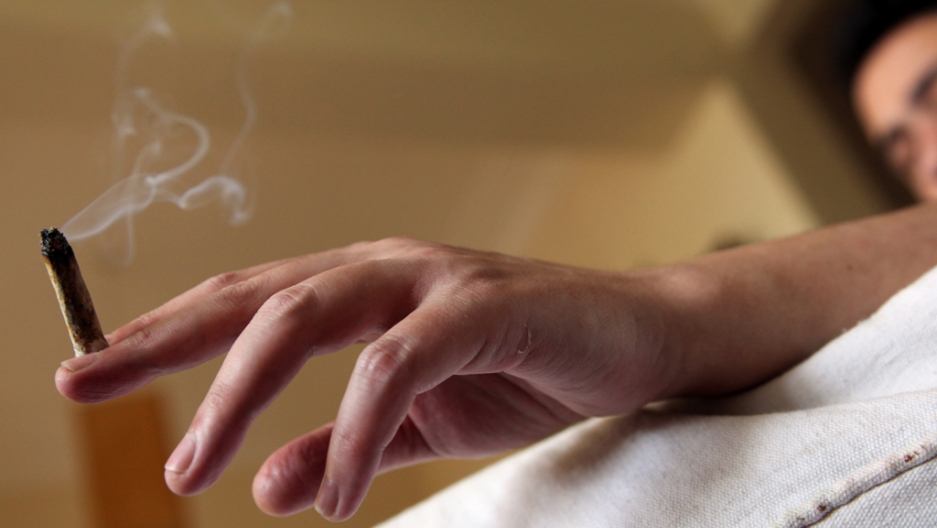 A man smokes a hashish joint at his home in Cairo on April 4, 2010. There’s a deep irony to drug use in Egypt, trafficking illicit substances is punishable by death while possession of small quantities can draw life sentences for addicts and infrequent users alike.
Credit: Victoria Hazou
Share

SAYEDA AISHA, Egypt — Um Salma’s tiny café is tucked in a maze of alleys in the Sayeda Aisha slum, home to the tomb of Aisha, the Prophet Mohamed’s youngest wife.

Pushing through the café’s saloon-style doors, a haze of acrid hash smoke assaults the senses. Inside, a dozen-odd workers sitting on wooden stools cluster around water pipes.

The water gurgles with each puff on the hookah’s long, slender hose. Traditional Egyptian music — the kind you can imagine a woman belly-dancing to, evoking the Sahara — rasps from an ageing cassette player.

Under the glare of neon bulbs, patrons banter about the slum’s latest news.

And they get utterly, convincingly high.

These men are a community, they say, but political discussions are "haram,"  or forbidden. Politics breeds divisions. Shared hits of Um Salma’s hash builds bonds.

Sixty-years-old, widowed and strictly religious in a gray-brown scarf draped over her hair and chest, Um Salma is an unlikely guardian of one of Egypt’s oldest pastimes. Although she enables an illegal activity, she is by no means an outcast here.

Her café “Dulab” — the Arabic word for a cabinet where prized possessions are kept from prying eyes — is one of this ancient city’s many sanctuaries for hash-smokers.

They say they have an understanding with local police, who rarely bother them.

From the 19th-century laborers who shocked Napoleon with their unabashed love for the intoxicant, to contemporary elite professionals — including, it is rumored, former Egyptian President Anwar Sadat — Egypt is perennially up in smoke.

“So many people do it,” said 27-year-old salesman and Cairo resident, Hazem Amin. “My friends say it shouldn’t be a crime, because life is so difficult. People need a way to relax.”

Egypt traces its hash habit to roughly the 12th century, according to a Columbia University report. Back then, Muslim Sufi mystics smoked the drug to reach spiritual ecstasy.

Today, it is more popular among the vast working poor like those at Um Salma’s, who inhale pipes and joints to unwind amid the crescendo of political and economic turmoil.

According to a 2007 government study, 8.5 percent of Egypt’s roughly 80 million people are “addicted” to some type of drug, including hash. The number of casual hash smokers is believed to be much higher. Drug prevention workers and rehabilitation therapists in the capital say there are likely 10 million, but perhaps as many as 15 million, casual users.

Getting high is a cheap escape. At Um Salma’s, four “heads” of hash-sprinkled tobacco placed atop the water pipe and burned with coal cost just $0.75.

“It’s used by members of the lower classes who start using at events like weddings, or to reduce stress,” said Dr. Nagwa Ibrahim, director of a drug awareness initiative started by Amr Khaled, a popular Muslim television preacher in Egypt.

There’s a deep irony to Egypt’s widespread drug use. Using hash or other drugs is a serious criminal offense here. Trafficking illicit substances is punishable by death, while possession of small quantities can draw life sentences, for addicts and infrequent users alike.

Egypt is one of 32 countries that have laws mandating the death penalty for some drug offenses, though it ranks below places like Iran, China and Saudi Arabia for the number of offenders executed.

According to Amnesty International, over the last decade Egypt saw a marked decrease in the number of criminal executions. Because Egypt’s prisons are run by the highly secretive interior ministry, there are no statistics available. In 2010, a British citizen of Egyptian origin, Pierre Wassef, was sentenced for 25 years in an Egyptian high-security prison for drug trafficking, in a trial rights groups say was dogged by controversy.

Egypt’s drug laws were enacted under President Gamal Abdel Nasser in the 1950s and 1960s. Soon after, Egypt came under the financial patronage of the United States.

Because the Egyptian government has long shunned transparency, it is impossible to know for certain whether the US pressured Egypt to adopt harsh anti-drug provisions. According to the Harm Reduction Coalition, a US-based advocacy network for policy and public health reform, countries that attempt an independent drug policy run the risk of losing crucial US aid. Egypt is one of Washington’s largest beneficiaries; a small part of that aid goes to training anti-drug agencies.

But as most Egyptians could tell you, the heavy-handed punishments have done little to stymie use.

Drug prevention workers say lax law enforcement since Egypt’s uprising two years ago has contributed to an increase in drug use and general flouting of the nation’s substance laws. Citizens smoke openly in the streets. If the security services intervene, a small pay-off typically fixes the problem. The country’s brutal police are still reeling from a near-nationwide assault on their ranks.

The authorities themselves are rumored to be involved in the trade.

“You go to prison and can still access drugs there,” said Wael, an addict-turned-therapist at one of Egypt’s few rehabilitation clinics for drug users.

In a nod to the population’s informal cannabis liberalization, plucky hashish-smoking netizens have launched an online pricing board for the capital’s cash-conscious smokers.

The website el7asheshbkam.com — or “How much is the hashish?” — allows buyers to anonymously post their location in Cairo, and the price they paid for a coin of hash, a pinky-sized quantity. The site keeps a running tab of hash prices. It has thousands of users.

Even with Egypt’s Muslim Brotherhood controlling the presidency, a long-standing belief that Islam doesn’t explicitly forbid hash is warding off appeals by more conservative Islamists to crackdown on the habit.

“My neighbor is quite devout. He prays five times a day at the mosque but smokes every day,” said 43-year-old Cairo resident, Shady Mohamed. “He says only alcohol is mentioned [as a forbidden substance] in the Quran.”

The Muslim holy book, does in fact include prohibitions on alcohol use — but does not mention hash as either forbidden or tolerated.

And while Islamists may oppose its use, hash-smoking and addiction should not be criminalized, some Brotherhood leaders say. They think rehabilitation is the way to treat what they see as a deepening social problem.

“We don’t believe in criminalizing it. We believe in treating drug users with kindness, as proscribed by Sharia [Islamic law] principles,” said Ali Ahmed Mohamed Omran, a leader of the Brotherhood’s Freedom and Justice Party in Minya province. “It is criminalized now, but that has not prevented people from using drugs.”

Mohamed says the Islamists know better than to go after a habit so popular with the poorer classes, which make-up the core of their political base.

“They’ve talked about [banning] alcohol and bikinis and other things, but never drugs,” Mohamed said. “If they deny people hash, the people will get angry and stop supporting them.”

And so despite the specter of draconian penalties, Um Salma’s remains open for business.