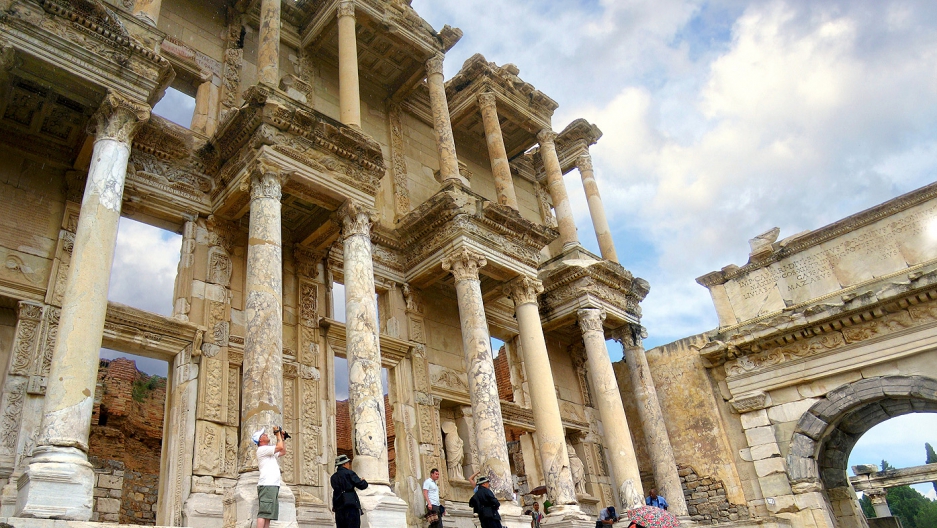 The ruins of Ephesus where it is believed the skeleton of Cleopatra's murdered half sister was found.
Credit: Wikipedia
Share

An Austrian archeologist believes that bones found at a Turkish historical site are those of Cleopatra's half-sister Arsinoe IV.

Princess Arsinoe was murdered about 2000 years ago by assassins sent by Cleopatra.

The woman's skull was found in 1926 in the ancient Greek city of Ephesus, which is now in modern Turkey.

Archeologists found it in a burial chamber on the site, known as the Octagon but it later disappeared during the Second World War.

In 1985, Hilke Thuer, of the Austrian Academy of Science, found the rest of the bones, which she has maintained belonged to Cleopatra's sister.

Now new techniques may be able to determine whether the controversial claim is true.

Critics say the bones are of someone too young to be Arsinoe, reported the Daily Mail.

Arsinoe was exiled to Ephesus by her sister, who saw her as a threat to her power.

Cleopatra convinced her husband Mark Antony to have the girl murdered in 41 BC, said Live Science.

Both were members of the Ptolemaic empire, a legacy of Alexander the Great's conquests.

Despite some setbacks, the archeologist believes she will one day be able to make a definite conclusion.

“They tried to make a DNA test, but testing didn’t work well because the skeleton had been moved and the bones had been held by a lot of people. It didn’t bring the results we hoped to find," Thuer told the News Observer.

“I don’t know if there are possibilities to do more of this testing. Forensic material is not my field. One of my colleagues on the project told me two years ago there currently is no other method to really determine more. But he thinks there may be new methods developing. There is hope.”

Thuer's theory will be explained during a lecture this week at the North Carolina Museum of History in Raleigh.