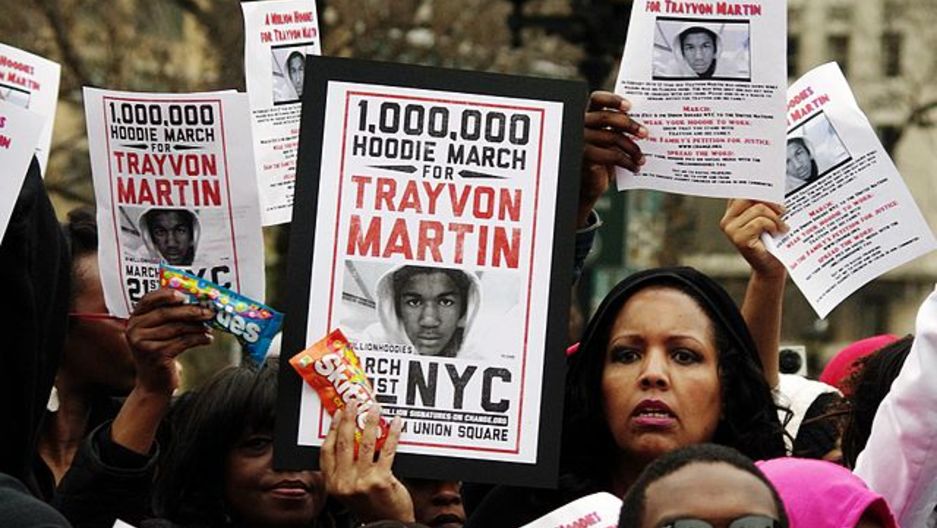 The group One Million Hoodies protest in March 2012 after the death of Trayvon Martin. (Photo by David Shankbone via Wikimedia Commons.)

Trayvon Martin was 17-years-old when he was shot and killed by George Zimmerman  in Sanford, Fla. one year ago.

The story drew international attention to question of race and Florida's Stand Your Ground law. Zimmerman was charged with second-degree murder, but maintains he was legally justified in killing Martin. Jury selection in his trial is set for June, with a hearing on his claim under the Stand Your Ground law set for April.

Phil Latzman, a reporter for WLRN in South Florida, says a lot changed in how the country views guns.

"The tragedy in Newtown turned the entire country onto this gun debate, which we were having here in Florida a year ago with the Stand Your Ground law and the Trayvon Martin killing in Sanford," he said.

The debate over changes to the law has raged on, Latzman said. State Sen. Chris Smith is leading a task force to re-evaluate the 2005 law. But Florida Gov. Rick Scott has his own task force evaluating the existing legislation.

"They basically recommended that there would be no changes to the stand your ground law. The National Rifle Association is a very strong lobby in Tallahassee," Latzman said.

In the southern part of the state, every police chief talks about gun control, and in the north, gun rights are strong, Latzman said.

"There's a big disconnect between what happens in the northern part of the state and in particular in Tallahassee, and what happens in south Florida on the issue of gun control. The reality is, it's not going to change because the legislature is content with what the Stand Your Ground law is right now," he said.

As for the trial, Latzman says Zimmerman's attorney, Mark O'Mara, tried to delay the trial so Zimmerman could use the defense that he is immune from prosecution. But O'Mara was unsuccessful.

Valerie Houston, a pastor at the Allen Chapel AME Church in Sanford, where Martin grew up, says the community is deeply interested in the details of the trial.

"Throughout the year, we have been in touch with the Department of Justice to see that the police department is doing everything they should be doing with policing the community and providing a safe and secure environment for all residents," she said. "We are still intentional about making sure justice is served."

In the Sanford community, divisions exist, Houston said, but are improving.

"I think the awareness and the sensitivity, the spiritual awakening and somewhat of a civil rights movement that took place in Sanford allowed people to understand the dynamics of what the African American community had been voicing and crying out," she said.

Since Martin's death, Houston says, the police department has made changes to how it operates.

"So, if that incident that happened with Trayvon Martin happens again, I would be surprised," she said.