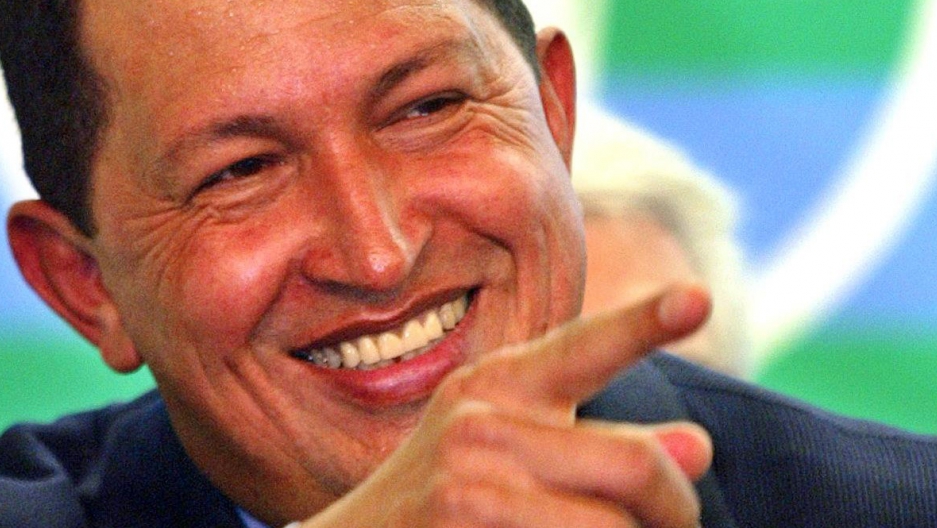 The maverick leader suggested that capitalism could have finished off life on Mars.

“It wouldn’t be strange that Mars had once been civilized but perhaps capitalism and imperialism arrived there and finished it off,” the president said.

“Here on Earth, hundreds of years ago, there were great forests,” he added, sipping a glass of water on World Water Day. “Now there are deserts.”

“It was impossible! What could we do with that?” he said to GlobalPost at the satire website’s offices in Caracas. “It was so surreal. People believed that the news had been written by us!”

And the surrealism continues.

It's been one week since Chavez returned to Venezuela after two months of laying low following a cancer operation in Havana, Cuba. During his absence, the opposition launched small, fractured protests that appeared all but useless against Chavez's immense following.

The information vacuum combined with the laughably ineffectual opposition has given birth to parodies galore.

Almost as soon as Venezuelan authorities released photos of Chavez in a Havana hospital bed flanked by his two daughters, the opposition cried Photoshop and spoofs began to emerge. In one, the late Michael Jackson reads a Venezuelan newspaper just days earlier.

“We haven’t seen Chavez for months and we’re having the best traffic ever,” said Juan Ravell, co-director of the production company that runs Chiguire Bipolar.

Ravell and his company also animate and write "Isla Presidencial" ("Presidential Island"), a series of short cartoons depicting Latin American leaders — and the Spanish king — shipwrecked on a deserted island.

One episode shows them sitting on a long tree branch, fishing in the sea below. Chavez talks and sings as day turns to night and back again. Various characters drop off over the course of the scene, bored by his long-winded rhetoric.

Bolivian President Evo Morales, the left-wing Chavez ally, is the only one who remains on the branch throughout.

Chavez himself acknowledged the episode on Venezuelan state television while sitting next to Morales in 2011. Chavez was speaking at length and laughed that the scene was reminiscent of the cartoon episode.

“That was amazing,” said Oswaldo Graziani, the production company’s co-director.

Well-known Venezuelan comedian Emilio Lovera provides the voices for all of the characters on "Isla Presidencial." “Venezuelans are known throughout Latin America for being [the] least serious,” he said, adding that the country has a history of satire.

The success of the show and Chiguire Bipolar, however, isn't just about Venezuela — it's about Hugo Chavez.

During Chavez’s absence, the tight-lipped government gave updates on his health over state television, though the bulletins often lacked substance.

Without hard facts, rumors swirl. “People often say that Chiguire is the only one that gives serious news,” said Roldan.

The parody can only be matched by reality. The day after Chavez’s return from Havana — unexpected news that sprang up on his Twitter account — the government showed off 20-year-old Alemar Jimenez, supposedly the president’s 4 millionth follower on the social network.

Vice president and Chavez’s chosen heir, Nicolas Maduro, offered her a bouquet of flowers while describing her as “one of a golden generation who support the fatherland.”

Both sides in Venezuela provide fodder for making fun. The opposition has begun to fracture since losing October’s presidential election. One of its leaders, former presidential candidate Henrique Capriles Radonski, wants to appear moderate, so he is staying relatively quiet.

“We are trying to put something together on the opposition’s lack of an appearance,” said Roldan.

Both the government and opposition are often self-contradictory, each believing its animosity toward the other is more powerful than reason.

For example, the government’s recent monetary devaluation has prompted opposition protests despite a range of economists insisting on its necessity.

Chiguire Bipolar made a joke of Chavez’s shock at the increased price of goods. “Maduro, what the hell happened? I can’t go away for a couple of months without everything being three times more expensive?” read a quote attributed to Chavez on the website.

Venezuelans laugh at the satire, but the devaluation has hit their pockets hard. Economists expect inflation to hit 30 percent this year.

Chiguire Bipolar has been around since 2008, and "Isla Presidencial" began two years later.

“Our goal is to make people think, make people laugh and depolarize things a little bit,” said Ravell. “People in the opposition and Chavez supporters often don’t realize that they are very alike. If they realized that, maybe we wouldn’t fight so much.”