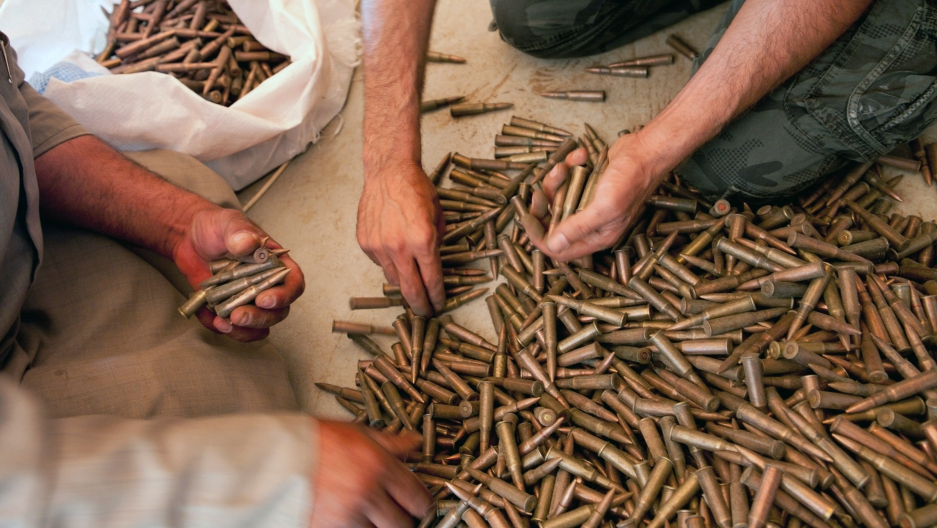 Fighters from the Free Syrian Army buy AK-47 bullets from a weapons seller in Idlib Province on July 4, 2012. US Secretary of State Hillary Clinton urged the UN to use the threat of sanctions to force change in Syria on July 6, 2012, as President Bashar al-Assad was rocked by the defection of one of his most senior generals.
Credit: LO
Share

The Croatian Foreign Ministry, as well as its arms-export agency, denied the Saudi Arabian deliveries.

Syria continues to see near-daily clashes between rebels and regime forces in violence the United Nations says has taken nearly 70,000 lives over the past 23 months.

Rebel forces in Syria are believed to be a mix of opposition fighters, nationalist militants, secular advocates, and even some more extremist groups, but the Times suggests Saudi Arabia is monitoring the arms deliveries.

The weapons have been getting into Syria via Jordan, starting in December, according to the Times, which added that their arrival is believed to "have been a factor in the rebels' small tactical gains this winter against the army and militias loyal to Mr. Assad."

However, a top US official speaking on the condition of anonymity told the Times that even with Saudi Arabia's help, the amount of weapons the rebels have access to is still less than weaponry provided to Assad by allies like Iran.

The official told the Times that while the Saudi development marks “a maturing of the opposition’s logistical pipeline ... we are not near that tipping point" in terms of the balance of power in Syria.

On February 12, Saudi Foreign Minister Saud al-Faisal said in Riyadh, "My country believes that the brutality of the Syrian regime against its own people requires empowering the people to defend itself," according to Reuters.

Foreign Policy said the move may be a "game-changer" in Syria, possibly legitimizing shipments of weaponry from other states.

US President Barack Obama has decided against sending weapons to Syrian rebels.