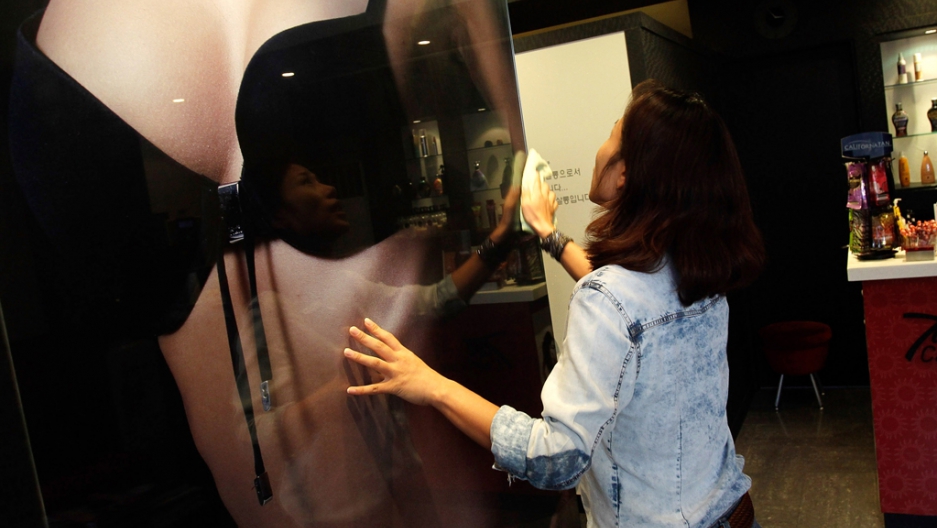 SEOUL, South Korea — A crowd of young women wait nervously in the lobby of a popular plastic surgery clinic in Apgujeong, the affluent neighborhood at the heart of Gangnam. Photographs of Korean pop singers and actresses line the walls, winsome customers who smile next to their cosmetic surgeons.

“It’s painful, but I really want a face like those Korean actress girls,” says a Chinese patient leaving a check-up — with her nose wrapped in a surgical bandage.

Many customers have traveled to this neighborhood — home to some 400 cosmetic surgery hospitals — all the way from China, Japan and Southeast Asia. They’re hoping to take home a little “Gangnam style” for themselves.

That isn’t just a Psy reference. Gangnam is popular from an Asia-wide trend made famous over the past decade: the popularity of Korean television shows and pop singers known as the “Korean Wave.”

Plastic surgery is a lucrative trade in South Korea, with citizens edging out Greece, Italy and the US as the most cosmetically enhanced people in the world.

At the Grand Plastic Surgery Clinic, surgeons offer procedures for the rounded eyes and pointy nose — just a few examples — that are a standard of beauty in Asia.

The Grand Clinic is one of many of Gangnam’s most successful ventures, attracting celebrity customers and offering regular tours to Korean television crews. “A lot of people want to be like they are in Hollywood,” said Huh Chul, a cosmetic surgeon. “There is glamour to it.”

But don’t be mistaken. In South Korea, this is no longer a woman’s pastime. Men are getting their faces restructured in big numbers, too.

In 1996, South Korea joined the club of developed countries, the OECD. It was the first major landmark that signified the country was gathering the expertise and technology to build a plastic surgery industry.

In the mid-2000s, as the Korean Wave picked up momentum, the nation saw a corresponding boom of travelers seeking medical procedures in Seoul. Grand Plastic Surgery Clinic started out with a single doctor working in a subway station, but grew to include some 30 doctors during those years, said Huh Chul, the doctor.

More recently, South Korea has been trying to appeal to medical tourists. Seoul is setting itself up as a hub competing with Thailand and India, but offering more reliable medical expertise and higher quality facilities.

For tourists, plastic surgery is the second most popular procedure behind internal medicine.

But the Korean Wave is only one factor boosting plastic surgery.

“Korea also offers price competitiveness and quality,” said Jiyun Yu, a senior researcher at the Korea Tourism and Culture Institute, a policy think-tank in Seoul. “We are not behind the American doctors in terms of expertise.”

The booming plastic surgery industry comes with a shady side. In late January, Seoul prosecutors announced they were launching a wide-reaching investigation into celebrities who abuse Propofol — a powerful anesthetic used in the operations.

The intravenously injected drug quickly puts patients to sleep after exhausting days of rehearsals, performances, and fan pressure. Addiction contributed to the death of Michael Jackson, who was addicted.

In December, police raided seven hospitals in Gangnam, alleging that several clinics have been prescribing Propofol illegally to celebrities for non-medical purposes. Bringing in celebrities is good for advertising.

So far, prosecutors have called in two prominent Korean actresses for questioning over their supposed abuse of the narcotic.

Even though one in five South Korean women admits to going under the knife, the practice hasn’t entirely shed its stigma.

South Korean men — especially older ones — revile the idea of dating or marrying a "sung-gui," slang for “plastic surgery monster.” The lewd term refers to a person who has lost natural beauty to inappropriate botox injections and surgical treatments, giving off a fake and sometimes bloated appearance.

But given the pressures of this fiercely competitive society, others say an eye-tuck and facelift are prerequisites to getting ahead.

“You don’t understand!” exclaimed a university student at a pub, who asked not to be named after she went through three operations. “To be Korean is to get plastic surgery. You must do it, or young people will think you’re weird.”