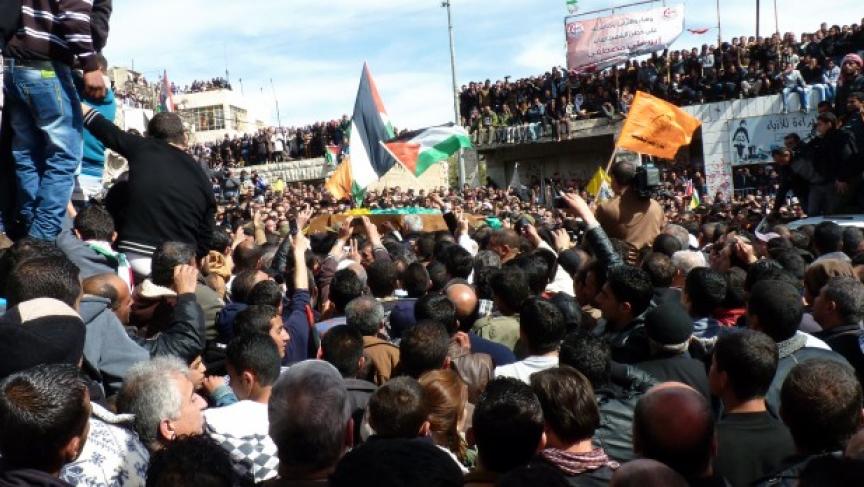 The funeral for Arafat Jaradat, a Palestinian prisoner who died in an Israeli jail last week, was held Monday amidst high tensions in the West Bank. (Photo by Matthew Bell.)

A 30-year-old Palestinian man died in one of Israel’s jails over the weekend.

Arafat Jaradat was arrested by Israeli authorities last week for throwing a rock that injured an Israeli citizen. He died a few days later.

Palestinian officials claim he was tortured. Israeli authorities said the autopsy results were inconclusive and that an investigation is ongoing.

Jaradat’s funeral was held Monday in the West Bank village of Sa’ir, outside the Palestinian city of Hebron. It had Israelis on high alert.

Thousands of people came out for the mid-day funeral. They clogged the streets and stood on rooftops. Villagers, schools kids and huge numbers of young men watched as the casket of Jaradat, a father of two, reached the tiny village cemetery.

People chanted, “God is great!” The crowd waved Palestinian national flags, alongside the banners of most political factions. The main factions are generally divided, but they came together Monday to mourn.

Uniformed Palestinian soldiers led the funeral procession and they let off a ceremonial burst of gunfire.

At times like this of high tension between Palestinians and Israel, the question often comes up. Could this be the start of a third intifada, or Palestinian uprising?

A 20-year-old business student from a university in Hebron said he came to the funeral with friends from school. He said they all hope to die as martyrs one day.

“Palestine will not be liberated until we all sacrifice and feed its soil with our blood,” Ramy said. “We should not stay quiet. This is not the first prisoner who dies in Israeli jails. We have to continue our protests and the escalation of our protests.”

Standing nearby, Palestinian lawmaker Anwer Al-Zboun made a prediction.

“This will begin very quickly, this intifada,” Zboun said.

The U.S.-backed Palestinian Authority will not be able to stop the large-scale uprising, Zboun added, even if it wants to.

“I know that the PA tries to prevent this intifada,” he said. “The occupation, aggression and the pressure on the people here,” will soon lead to an intifada.

But not everyone is so sure. Aziz Dweik, the West Bank leader of the Hamas militant group, stood among the crowd and could not say say if another intifada is imminent.

“Nobody is directing the people towards a goal,” Dweik said. “It’s the people themselves. The Palestinians, when they astonished the whole world with their first intifada, it was (a) popular movement which the people invented. God only knows how the people will react this time.”

For several days running, there have been clashes between Palestinians and Israeli soldiers across the West Bank. And there were more on Monday.

An Israeli defense ministry official on Monday said the Palestinian Authority is “trying to walk a fine line.”

At the moment, he said the Palestinians do not want another intifada, but Israel can “expect a large number of incidents in the near future.”