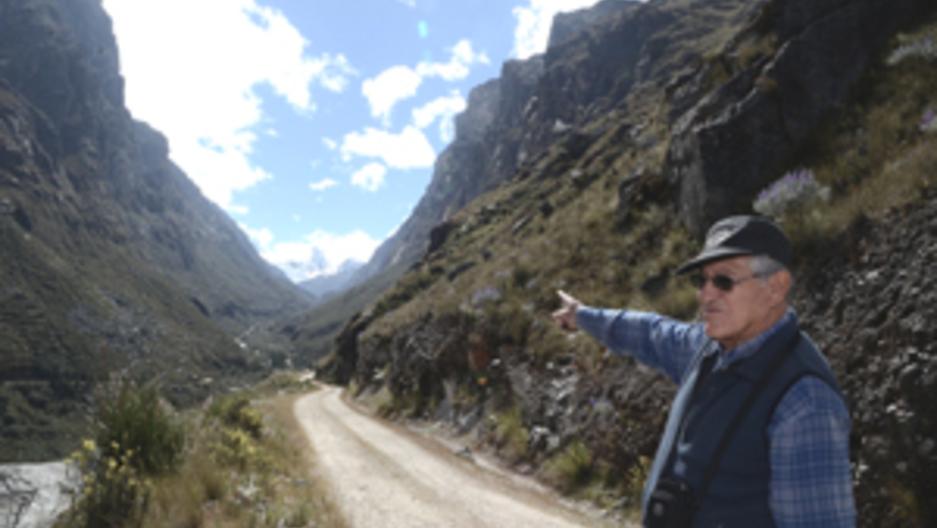 The hamlet of Carhuaz, in Peru's Cordillera Blanca Range, could hardly be more picturesque. Birds chirp and venders hawk their goods at an open-air market in the town, tucked into a fold at the furrowed base of snow-capped Mount Hualcan.

So it's hard to imagine what happened here one morning in April, 2009. That's when a curtain of ice weighing perhaps half a million tons slid off Haulcan's shoulder and crashed into a lake below. The collapse raised an 80 foot swell of water, ice and stone that washed over the lake's banks and roared downhill.

Startled farmers below fled in terror.

Estela Pajuelo was inside her sturdy adobe house that morning. She says her young son called to her from outside to run as a wall of mud and boulders headed toward her. She bolted for higher ground just before the wave of debris crushed her home.

"This is killing me, Pajuelo says. "I'm an indigent person. Why is this happening to me?"

Morales says global warming is melting mountain glaciers all around the world faster and faster. According to one new study, the tropical Andes, including the mountains of Peru, lost between 20 and 45 percent of their volume in the last 40 years.

And when the ice retreats, it can create precarious situations.

Morales says lakes often form at the base of a receding glacier. They can be held in place at first by natural gravel dikes, but those barriers are fragile, especially if they're disturbed by an ice fall like the one in Carhuaz.

Carhuaz was actually fortunate. The embankment of its glacial lake had been reinforced with concrete, which limited the size of the flood. 100 homes were hit, but nobody was killed.

But Morales says it could have been different. A glacial lake can destroy a city.

Standing in a steep-walled canyon just below another glacial lake called Palcacocha, Morales tells the tale of what happened here in 1941, when a huge ice outcrop slipped off a glacier and whipped up a wave that breached the lake's bank.

It let loose 4 billion gallons into the canyon, inundating the city of Hauraz below. A third of the town was destroyed and 5,000 people drowned.

That was more than 70 years ago, so climate change probably isn't entirely to blame for these kinds of disasters. But the risks are increasing as glaciers melt faster here and elsewhere.

Cesar Portocarrero oversaw reinforcement of Lake Palcacocha's banks to protect the rebuilt city as further melting ice refilled the lake above. He also designed the dam that kept the avalanche in Carhuaz from turning deadly. He's now retired from the government's Glaciology Office in Huaraz and is sharing the techniques he helped pioneer here oversees.

Portocarrero says Peru is a global example of the fight against the danger of these lakes.

"We're even applying our technology in the Himalayas," he says. He himself is now working as an adviser in Nepal, which, along with China, Bhutan and Pakistan, is responding to new threats from retreating glaciers and growing glacial lakes. Bhutan just wrapped up an arduous construction project 15,000 feet up in the mountains to protect communities in two remote valleys.

Ironically, Portocarrero says he's again concerned about his own city here in Peru. He says the lake above Huaraz has 30 times more water now than when he reinforced its banks in the 1970s, posing a big risk to the city's 150,000 residents.

He says a flood of 10,000 tons of water, soil and rock per second could arrive in Huaraz in less than half an hour.

And Portocarrero says Palcacocha is only one of almost three dozen precarious glacier lakes in the Cordillera Blanca.

Having developed expertise in shoring up these lakes, however, Portocarrero says Peru's central government no longer does the actual construction work. It's transferred that responsibility to regional governments.

But Portocarrero says they're trying to save money, so they're not fixing the lakes, either.

Glaciologists say these risks will eventually subside, but only after most of the world's mountaintop ice has melted away.

In the meantime experts warn that people living near such glaciers should be prepared for more and bigger floods.

This story was reported with help from the Pulitzer Center on Crisis Reporting and the Whole Systems Foundation.