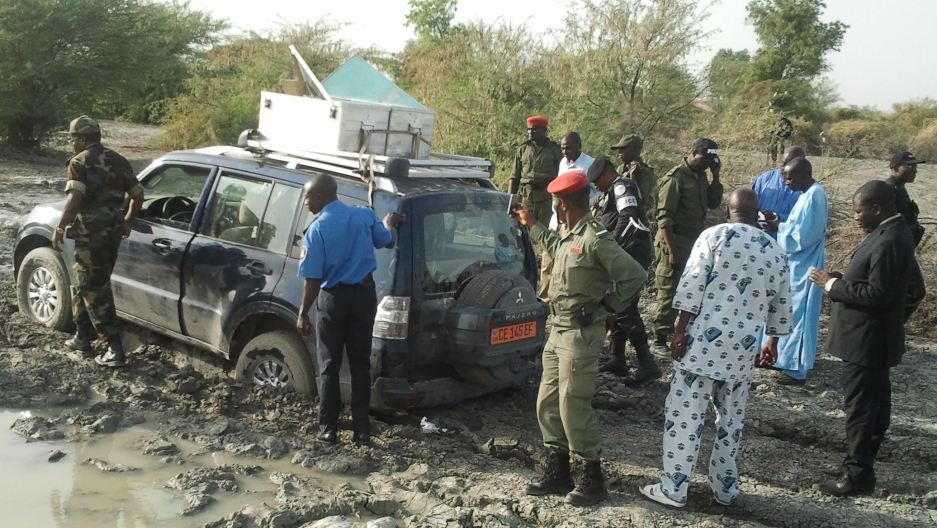 Cameroonian policemen and soldiers near the Nigerian border surround the vehicle in which seven members of a French family were driving this month before being seized by six gunmen on three motorbikes.
Credit: AFP
Share

ABUJA, Nigeria — The kidnapping of 14 foreigners in less than a week and slaughter of nine health workers has brought northern Nigeria international attention.

“Everybody’s looking at their business practices and their vulnerabilities and doing a risk analysis,” a senior US government official said. “A lot of the [non-governmental organizations] in the type of work they are doing in these rural areas — they are vulnerable.”

Speaking in an interview, the official said he sees “no indication” the surprising escalation of attacks against foreign interests is abating.

Seven employees of Setraco, an international construction company working in Bauchi State, were abducted from their compound on Feb. 15, including four Lebanese workers and three Europeans: one Greek, one Italian and a Briton. Police said gunmen attacked their station and a prison before busting into the Setraco compound wielding explosives and killing a civilian guard before the kidnapping.

The company immediately shut down its northern Nigeria operations and evacuated its outpost. Foreign workers were shipped back to the capital, Abuja.

Nigerian employees who showed up for work Monday were told their jobs may be cut.

Other commercial development companies in the north have also suspended work and are threatening to shut down operations, the official said.

Locals initially suspected the kidnappers were imitating armed groups in the south that have made millions of dollars abducting foreigners for ransom.

But it soon became clear other forces were at work after Nigeria’s newest Islamist militant group, known as Ansaru, claimed responsibility for the attack in a statement decorated with its insignia: a book framed by AK-47 automatic rifles and black Al Qaeda-esque flags.

Ansaru is believed to be an offshoot of Boko Haram, another Islamist group with Al Qaeda ties that’s killed thousands of people since it launched an insurgency in 2009. Unlike Boko Haram, which primarily targets Nigerians, Ansaru —whose full name means "group dedicated to helping Muslims in Africa” — appears to have international aspirations.

Although Ansaru’s statement characterized the kidnappings as a response to Western interference in Muslim countries, it listed no concrete demands. The attack was “base[d] on the transgression and atrocities done to the religion of Allah… by the European countries in many places such as Afghanistan and Mali etc.,” the statement read.

Several days after the abduction, a French engineer and his family of six were kidnapped across the border in neighboring in Cameroon. They were taken to Nigeria’s Borno State, Boko Haram’s original home.

Marilyn Ogar, a spokesperson for the Nigeria’s State Security Services, declined to say whether anything is known about the victims’ status. “I think it’s a little too premature to be talking about that,” she said during a news conference in the capital. “Whatever will assist us, we want to keep it close to our chest.”

Three other Europeans kidnapped by Ansaru remain missing, two since May 2011. No group has claimed responsibility for the Cameroon abduction.

Westerners in northern Nigeria were already reassessing their security before the kidnappings, after nine polio vaccinators where killed earlier this month.

Nigerian journalist Wole Olaoye blames well-known sheiks in the region who preach against polio vaccinations as a Western effort to sterilize Muslim communities.

“It’s going to slow down the effort to rid Nigeria of polio,” he said. “It might even make more people think there’s something to the anti-vaccine campaign because the story will go around: ‘Ah, didn’t you see? They had to kill some people because this thing is not good for our children.’”

Nigeria had 121 recorded polio cases last year, more than the rest of the world combined. Afghanistan and Pakistan came second. Six cases were reported in Niger and Chad.

More from GlobalPost: In Nigeria, oil divides the rich and poor

More than a blow to efforts to eradicate a debilitating disease many believe has already been wiped out, the recent violence may also prompt an economic disaster for northern Nigerians living with massive unemployment because the latest round of violence is directed at foreign investors in development and health.

Abubakar Kari of the University of Abuja believes that if the violence continues, northern Nigeria may come to resemble the oil-rich Niger Delta of the mid-2000s, when militants fought an all-out war against big oil companies and the government. The campaign all-but halted economic activity, which in turn contributed to the violence.

“What we now have is uncertainty,” he said. “No one knows who’s responsible or when it will end.”