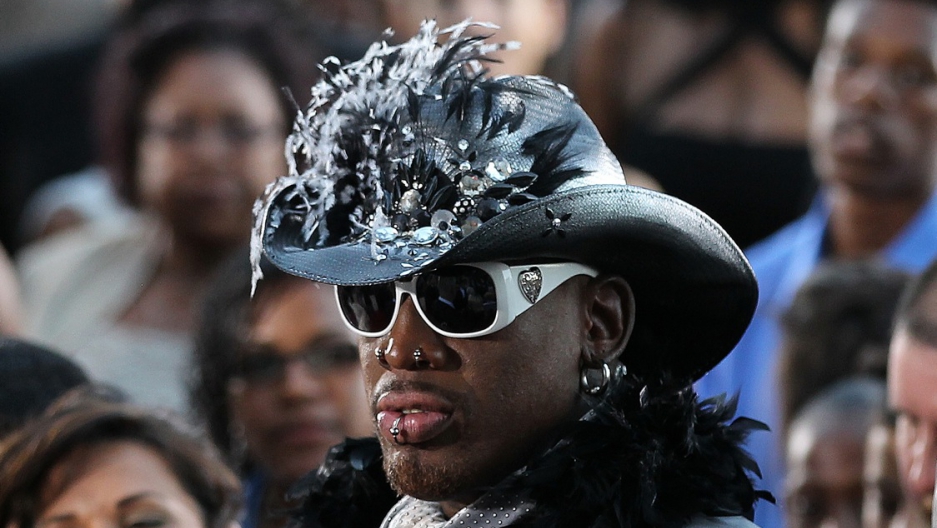 Unlikely as it seems, the flamboyant former NBA superstar will spend the next week acting as ambassador to America's self-professed arch-enemy by teaching kids to shoot hoops.

He's looking forward to "having some fun," he told reporters at Pyongyang airport.

"It's my first time [in North Korea]," Voice of America quotes him as saying. "So hopefully everything will be okay, and I hope the kids have a good time for the game."

The trip was organized by the Vice media company, which plans to turn it into a TV documentary for broadcast next month.

Rodman is accompanied by 12 other basketball players, who together will run training sessions for local children and other activities meant to encourage "openness and better relations with the outside world," according to a Vice press release.

"We are expecting to have great exchanges with the Korean kids and families which we always love, no matter South or North," a very on-message Bull Bullard of the Harlem Globetrotters told Chinese news agency Xinhua.

Vice said the visit may even see Rodman and co. play an exhibition match for Kim Jong Un, though a North Korean official told Xinhua that that remained to be confirmed.

Kim is rumored to be, like his father before him, a serious basketball fan. Former classmates at the Swiss boarding school he attended as a teenager remembered him spending hours drawing fan art of Rodman's former Chicago Bulls teammate, Michael Jordan. (Jordan, by the by, also Kim Jong Il's favourite player, supposedly once declined an invitation to visit North Korea.)

As is the wont of unelected autocrats, both Kims have reportedly sought to impose their passion for the game on their subjects. According to this story in the San Diego Union-Tribune, Kim Jong Il's regime is said to have told North Koreans that playing basketball would help them grow taller, while just last week the state news agency reported that Kim Jong Un had personally sent basketball equipment to sports teams across the country.

Basketball is "enormously popular" in North Korea as a result, the Associated Press says.

And diplomats have long hoped the game could build bridges between North Korea and the US. Bob Carlin, former chief North Korea analyst for the CIA and State Department, told the Union-Tribune in October 2006 – weeks after North Korea had conducted a nuclear test, as it did earlier this month – that sending a delegation of US basketball players to Pyongyang could be a "very useful" step.

"These things carry only so much diplomatic freight," Carlin said then, "but they are the little things that begin to open relations."