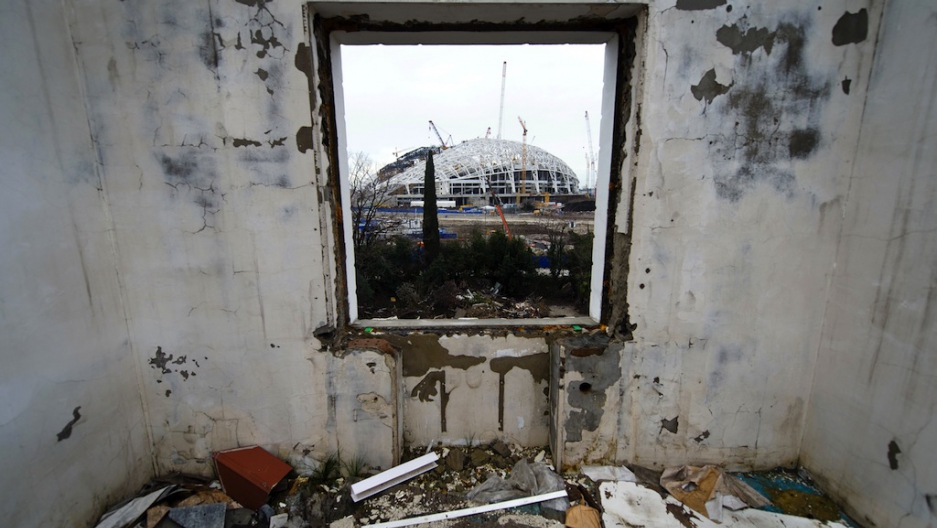 The central stadium for the Winter Olympics 2014 is seen through the window of a derelict house in Sochi on Feb. 18, 2013.
Credit: Leon Neal
Share

MOSCOW— Bakinskaya Street is located on a sloping hillside in Veseloye village within the city limits of Sochi, the Russian city where, less than a year from now, the 2014 Winter Olympics will launch.

In April 2011, a major landslide caused the homes along the uppermost part of Bakinskaya Street to begin sliding down the hill. Early one morning, families were woken by a loud noise that accompanied the landslide. It was described as being “like the earth was splitting apart at the seams.” Residents watched their houses transform with an alarming speed; within weeks, walls started cracking and houses sank into the ground.

Experts from local environmental groups believe the landslide was caused by unauthorized dumping of Olympic construction materials directly above the street. Large trucks had been hauling concrete slabs and other construction waste here almost every day, residents told us. Almost two years after the landslide, the homes are now essentially unlivable; a precarious circumstance for the families that remain.

The $50 billion makeover to transform Sochi into the “premier winter sports destination” has come at a high cost for local residents and the migrant workers imported to create the new Sochi.

Some families displaced for Olympic construction have lost their homes without compensation. In the village of Akhshtyr, residents face their fifth year without a reliable source of drinking water. Activists and journalists who seek to report on Olympics-related human rights abuses have faced pressure, harassment, and in some cases, arrest and prosecution.

As we walk up Bakinskaya Street past rows of houses, the sweep of massive new Olympic arenas opens up from the hilltop. But all around, the neighborhood seems to be from a child’s nightmare, with fences, houses and other buildings tilting at grotesque angles, one held up with a car jack. Some houses have sunk so deeply that windows are half buried. Concrete walls have massive cracks, and fences lean onto each other.

Anya Kaladjian, a saleswoman at a local grocery store, who wears her sleeves rolled up and hair pulled in a skimpy ponytail, took me “on a tour” of her two-story house that has already sunk nearly three meters below the ground level. She pointed out numerous cracks in the walls, showed how tilted her floor was, and demonstrated an electric pump she uses to remove water that collects on the kitchen floor as the house sinks deeper into the ground with each day.

The air in the house is thick and damp, like a dungeon, and the walls are covered with condensation and mold. Electric blackouts have been occurring frequently lately, Anya says, and when that happens the entire family must bail water from the kitchen.

The tour ended in Anya’s bedroom, where she told me that when she wakes up every morning, she is so dizzy for the first 10-15 minutes she can’t walk because the house is sinking, “We have black mold on everything. Living here is killing me.” She says her grandchildren are constantly sick, and the environment also affects the other nine members of her family, including two young children and a newborn.

Families on Bakinskaya Street tried to get local authorities to help, but without much luck. Tatiana Skiba, whose family of eight lives in a two-story house on the street, told us a local official said that within five minutes of being in her house his head was spinning. But the official refused to classify the situation as an emergency, “because there were no corpses.”

From outside her house, Tatiana can see the nearly completed Olympic stadiums. “If we slide down a little more, we will end up in a prime spot, right in the middle of the Olympic action,” she joked.

The families affected by the landslide have so far been offered only temporary resettlement to dormitory-style accommodations in a large apartment block. Most families refused, fearing poor conditions reported to exist in the temporary accommodations, as well as fearing they will lose their property with no compensation.

In July 2011, desperate residents hired an company that specializes in assessment of soil erosion and impact of landslides to establish whether there was a connection between the dump and the slide.

The company concluded that the main reason for the deplorable state of the houses on Bakinskaya Street was a landslide triggered by an unauthorized garbage dump used for construction waste, including particularly bulky pieces of concrete and steel, on Mindalnaya Street, located on a hill directly above Bakinskaya Street.

In March 2012, three families filed a lawsuit against the city and regional authorities for failing to respond adequately to the situation on Bakinskaya Street. The court ruled in their favor and ordered the authorities to inspect the area and determine whether the illegal construction dump caused the landslide.

Residents celebrated the news, thinking it was their Olympic victory.
But almost a year later, the court order still has not been executed. Bakinskaya Street residents continue to live in appalling conditions in their collapsing houses.

The International Olympic Committee officials continue to make regular inspection visits to Sochi, but have not once visited these homes, so close to the Olympic center.

Human Rights Watch has informed the IOC on the various ways the rapid preparations for the 2014 Olympics have had a profoundly negative effect on the lives of families there.

As the countdown to the Winter Games is underway, the IOC should finally insist that Russian officials help these families before, as Anya Kaladjan said to us, “this house will finally collapse and bury us all.”

Yulia Gorbunova is a Russia-based researcher for Human Rights Watch.