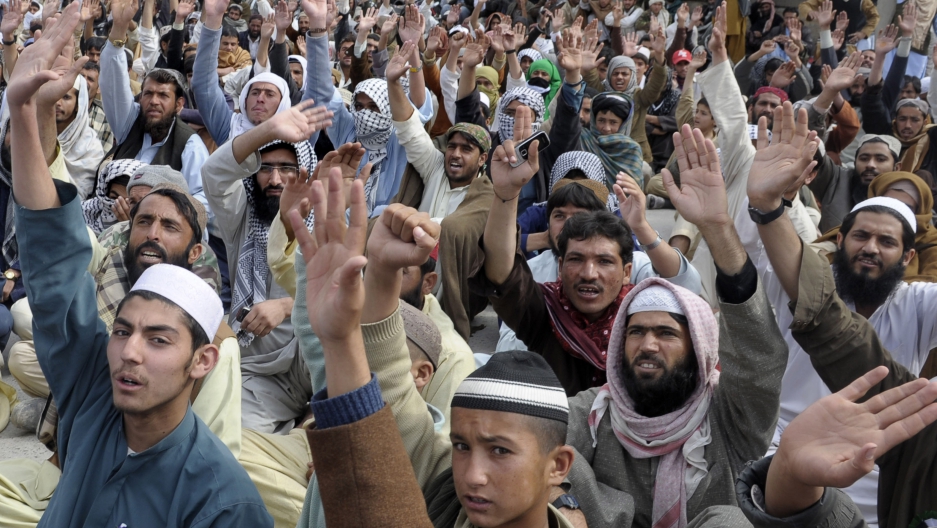 Activists of religious party Jamaat Ahle Sunnat shout slogans as they sit in a protest against the Pakistani forces operation in Quetta on February 22, 2013, after the bomb attacks on Shiite Muslims . Attacks targeting Shiites in Pakistan have claimed almost 200 lives already this year. Human Rights Watch said more than 400 were killed in 2012, the deadliest on record for Shiites.
Credit: Banaras Khan
Share

WASHINGTON — With fighting in Syria at a roiling boil and no end in sight for a conflict that has claimed more than 60,000 lives, the ancient sectarian rivalry between Sunni and Shia Islam is drawing increased attention in Washington.

Evidence for this was on display last week as Middle East analysts at two prestigious think tanks examined the rise in Sunni-Shia sectarian violence and where this religious and political competition may be leading the region.

For the audience that packed a Brookings Institution conference room on a cold, rainy Friday to hear a discussion entitled “Is there a Widening Sunni-Shia Schism?” it was a discouraging and pessimistic assessment of the future.

Bruce Riedel, director of the Brookings Intelligence Project and author of the recently published “Avoiding Armageddon: America, India, and Pakistan to the Brink and Back,” noted the increased violence directed at Pakistan’s Shia minority community and called the trends there “alarming.” In the two provinces of Baluchistan and Sind, he noted, there were 60 sectarian attacks in 2011, and 120 in 2012.

In Arab countries, there has been renewed anti-Shia violence in Iraq, mostly indiscriminate car bombings aimed at civilians by Sunni insurgents with Al Qaeda links. And in Bahrain, the Sunni-dominated monarchy continues to forcibly repress street protests by the Shia community. In both countries, Shia are a majority of the population.

By contrast, the Shia-related Alawites in Syria are a minority group. But for five decades they have dominated the country’s political and military establishments under the leadership of the Alawite family of Syrian President Bashar al-Assad.

The current battle in Syria is driven by many factors, including a desire to escape repression and poverty. But the majority Sunni population also wants to rid itself of rule by what it views as a heretical strain of Islam. And Syria’s civil war has increasingly taken on sectarian colors.

Riedel noted that Al Qaeda-like militias in Iraq, and among the myriad groups of Syrian rebels, are extremely hostile to Shias, whom they view as “the devil incarnate.” In Iraq, they can do a lot of damage but will never succeed in toppling the government because Sunnis are a minority, Riedel said.

However, Al Qaeda rebel groups in Syria, he added, are “riding a winning horse” because of the Sunni-majority population.

Although Sunnis and Shia have been fighting for 1,400 years, the current escalation of their conflict across the region is due in large part to heightened rivalry between Sunni Saudi Arabia and Shia Iran, Riedel noted, as both strive for hegemonic influence in the area and beyond in global Islam.

This Saudi-Iran enmity shows no sign of abating, he added, which means that “the likelihood is an intensification of” Sunni-Shia violence in the Middle East.

Geneive Abdo, a fellow at the Stimson Center, who is examining sectarianism in the wake of the Arab Awakening for a project at Brookings, presented her findings after Riedel. She said that in both Bahrain (70 percent Shia) and Lebanon (40 percent Shia), the doctrinal aspect of the Sunni-Shia divide is becoming more intense.

Nevertheless, politics also plays a role, especially with the Sunni monarchies of the Gulf states, which tend to regard the pro-democracy demands of the Arab Awakening “as part of a subversive Shia agenda” to weaken their rule.

Abdo noted that Shia communities across the region were elated by the rise to power of Iraq’s Shia — an outcome of America’s invasion of that country. But they now are dismayed at the possibility of a Sunni Islamist-oriented government in Damascus if Assad and his Shia Alawite clan is defeated. “They feel that power is slipping from their grasp,” Abdo said.

Earlier in the week, the United States Institute of Peace and the Woodrow Wilson International Center for Scholars jointly sponsored a discussion on Arab views of Iran and how they relate to the sectarian rivalry plaguing the region.

Shibley Telhami, the Anwar Sadat Professor for Peace and Development at the University of Maryland, and a leading pollster of Arab public opinion, emphasized that Arab views of Iran are complex and comprised of many factors apart from religious beliefs.

It is true that in countries with large Shia communities such as Iraq, Lebanon and Bahrain, attitudes towards Iran follow predictably sectarian lines, Telhami said.

However, in the larger, Sunni-dominated parts of the region, feelings towards Iran are molded by other factors as well, such as Iran’s standing up to Israel and the United States. Consistently, he added, polls show that both Sunni and Shia Arabs are “inspired by Iran’s Islamic anti-imperialism.”

“For example we saw during [Iranian President Mahmoud] Ahmadinejad’s visit to Cairo that Egyptians were ‘saying it with shoes,’ so to speak,” Dunne said, noting that on two separate occasions while in Egypt the Iranian leader had shoes thrown at him — a sign of disrespect.

The purported motive for the shoe-throwing was anger at Iran’s support for Syria’s president, despite the atrocities his forces have committed against the civilian population. But in a remarkable incident, Ahmadinejad was also publicly chastised by Sunni religious leaders in Cairo for allegedly insulting Sunni beliefs and wanting to spread Shiism in Egypt.

These two events in Washington, which sought to understand complex rivalries in a very complicated part of the world, only reinforced this important fact: That religion still matters — a lot — in the Middle East.