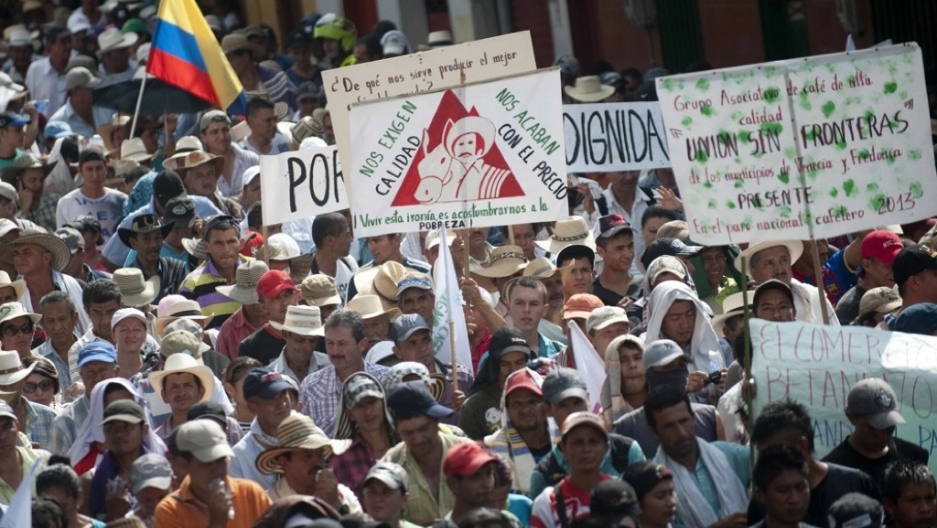 BOGOTA, Colombia — Colombian coffee growers across much of the country fought with anti-riot police, blocked roads and demanded government aid Tuesday on the second day of a work stoppage to call attention to the critical situation facing Colombia’s coffee industry.

At least 59 farmers who had set up makeshift roadblocks in Antioquia and other coffee-growing areas were injured Monday when police moved in to clear roads and highways. By Tuesday, the protests had spread to about 10 of the country’s 32 regions and there were numerous reports of arrests.

“What we have here is a very grave crisis,” said Colombian Senator Jorge Enrique Robledo of the left-wing Democratic Pole party who supports the strike. Thousands of small family coffee farmers “are in ruins.”

The protest, which organizers claim will continue indefinitely, was years in the making. Coffee growers have faced a series of blows, including heavy rains, crop disease, slumping international prices and an overvalued national currency. All of this has led to a steep drop in production.

Last year’s output of 7.7 million 132-pound bags of coffee was a three-decade low and about half of what Colombia produced in 1992. As a result, Colombia has fallen from third to fourth place among world exporters, behind Brazil, Vietnam, and Indonesia.

It’s gotten so bad that the land of Juan Valdez is now importing coffee — which would be akin to Saudi Arabia or Iran importing oil.

Two out of every three cups brewed in Colombia are now made with low-grade beans hauled in from neighboring Peru and Ecuador. That’s due to the recent production problems as well as the fact that most Colombian coffee consists of high-end washed Arabica beans that are exported.

However, in the business of exporting those hand-picked, top-quality beans — used to make flavorful brews that are drawing hoards of Americans to specialty coffee houses — Colombia is still No. 1. Time will tell for how long.

Farmers are demanding more government aid to lift their struggling sector out of this rut.

Colombian officials, however, claim they’re doing all they can to help coffee growers and they cast aspersions on motives behind the work stoppage. After strike leaders failed to show up for a meeting with his cabinet ministers in an effort to avoid the stoppage, President Juan Manuel Santos called the protest “unnecessary and unjust.”

Luis Genaro Muñoz, director of the National Coffee Growers Federation, blamed the unrest partly on political factors ahead of next year’s congressional and presidential elections. Indeed, everyone from leftists to right-wing former President Alvaro Uribe, who may run for Senate next year, have been piling on and blaming the Santos government.

But there’s no denying that thousands of coffee growers are on the ropes.

Starting in 2010, several years of heavy rains and flooding destroyed plantations and washed out roads and bridges making it harder to get coffee to market. The excess rain made the coffee bushes more susceptible to a blight called coffee rust, which further lowered production. Farmers have planted 2 billion new trees resistant to coffee rust but there’s a lag time of 24 months until they start producing.

Meanwhile, the Colombian peso has been steadily appreciating amid an oil and mining bonanza that’s brought in billions in foreign investment. Four years ago, the exchange rate was about 2,300 pesos per US dollar, as opposed to the current 1,790 pesos. That means all Colombian exports — from coffee to flowers to oil and coal — bring in fewer pesos to their producers.

Another problem has been a steep plunge in world coffee prices: They’ve dropped 35 percent from a year ago. That’s due to a correction of abnormally high prices brought on, in part, by speculators as well as to an expected bumper crop this year in Brazil, the world’s largest grower.

Santos, a former Coffee Federation official, has tried to lend a hand. During a visit this month to Caldas department, the heart of Colombia’s so-called coffee belt, Santos extended a program until July that pays farmers a $16 per bag production subsidy. Over the past four years, half of all government agricultural subsidies — totaling $670 million — have gone to the nation’s coffee growers. On Monday, Santos promised a yearlong debt moratorium for coffee farmers while the Central Bank pledged steps to reduce the value peso.

“We all know about the problems that coffee growers are facing. But they are not alone,” Santos said Monday.

But even with the production subsidy, farmers claim to be losing money and have demanded a government-mandated floor price for their coffee. The government refused and after a series of fruitless meetings, the most militant farm leaders opted to go forward with their strike.

The problems “can’t be solved with last-minute meetings,” said Oscar Gutierrez, one of the strike leaders. “The government should not play around with the fate of 500,000 peasant families who depend on coffee to make a living.”

One farmer who joined the protests in Antioquia department told the Bogota daily El Espectador: “This strike is a defining moment. We will either triumph or perish.”

But some analysts argue no amount of government aid will keep all these growers afloat. Beyond the weather and roller-coaster commodity prices, they say, the problem is structural.

Most of Colombia’s 570,000 producers are small-scale farmers with fewer than 5 hectares (fewer than 12 acres), which makes them less efficient than larger producers. These small-timers often lack the money to invest in new trees and modernize their farms — and it shows.

On average, Colombian farmers produce 8.3 bags of coffee per hectare, according to the Colombian Association of Coffee Exporters. That compares to 12.4 bags in Guatemala, 16 in Costa Rica, 17 in Honduras and 22 in parts of Brazil, where unlike Colombia and Central America the industry is mechanized.