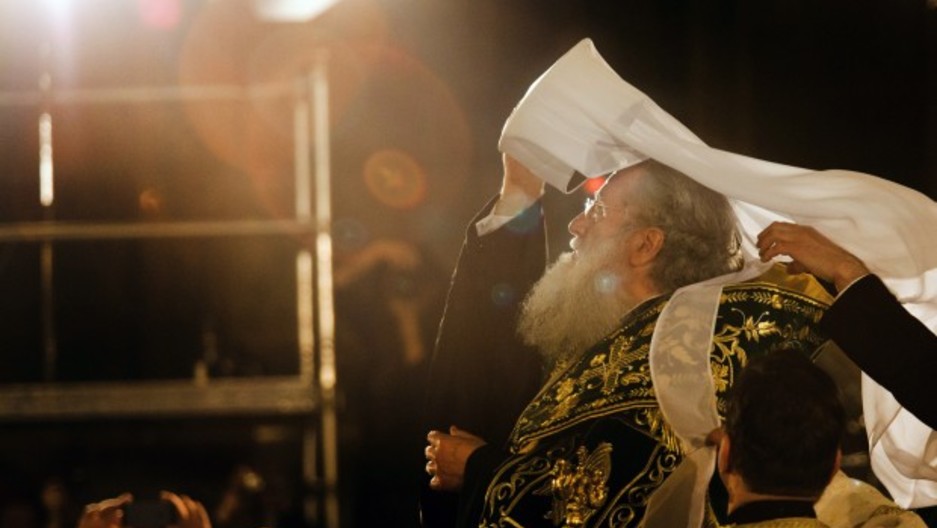 Newly elected Bulgarian Patriarch Neofit is seen during his enthronement at Alexander Nevsky cathedral in Sofia, Bulgaria, on Feb. 24, 2013. (Photo by Boryana Katsarova.)

In what should have been a solemn occasion, Bulgarian Church officials this past weekend picked a new leader.

In a special election, the Bulgarian Holy Synod had made a choice.

“For the first time in more than 600 years, not in tyranny and slavery, Bulgaria has freely chosen its own spiritual leader and holy autonomous patriarch,” said a clearly emotional church spokesman, immediately after the vote.

The grand spiritual pageantry in Bulgaria’s Saint Alexander Nevski Cathedral, the gold robes and the choir, stoked national pride. But, the Bulgarian church hasn’t been much of a moral role model for several generations.

The Bulgarian media is filled with images like a fuzzy hidden camera video of a bishop demanding payment for an interview. When the reporter protests, the bishops drops the price from $35,000 to $20,000.

But that kind of corruption is only the tip of the iceberg.

“The total lack of public scrutiny has resulted in this massive market for church property,” said Philip Gounev from the Center for the Study of Democracy in Sofia.

He calls the Bulgarian church a mess. For starters, the church is the second-largest landowner, after the state. And secrecy and poor management has made it an easy target for organized crime groups.

The Holy Synod, which governs the church, is infested, critics say, with men who informed on others and did the bidding of the Communist Party.

Theologian Ventzilsav Karavulchev says the situation is painful but not entirely shocking.

“Most of our hierarchy, people are on the top. Our bishops, are not bad people, but not wise people, not well-educated people,” Karavulchev said. “And for a small profit, are able to do big mistakes.”

Karavulchev says the Communists intentionally recruited immoral and intellectually inferior people to staff the church. Eleven of the 14 bishops who chose the new patriarch have been revealed as Communist-era collaborators.

The church, for its part, is planning to canonize martyrs of the Communist era. Thousands of priests were killed or imprisoned. But the church has never publicly addressed its support for the Communist regime.

Desislava Panayotova, with the Holy Synod’s cultural department, says current church officials who collaborated were working for the national interest, not that of the Communist Party.

“Most of them are decent and helpful to the development of church life,” Panayotova said. “I think the repenting has taken place in their hearts and this is the most important (thing).”

But for many, this still doesn’t repair the damage done by keeping silent for so long. Theologian Georgi Todorov says the church’s failure to publicly atone for its sins makes the collaboration appear worse than it really was.

“They should have honestly have said it,” he said. “Something like two, three, four months after the fall of Communism, confessed it to the public, repented and said ‘OK, we have done this political compromise. But this is, brothers, a political issue. Please don’t overestimate it.’”

Monday was the new Patriarch’s first day in office and expectations were high. But not too high.

His Holiness Patriarch Neofit of Bulgaria himself has a record as a collaborator in the files of the former State Security.