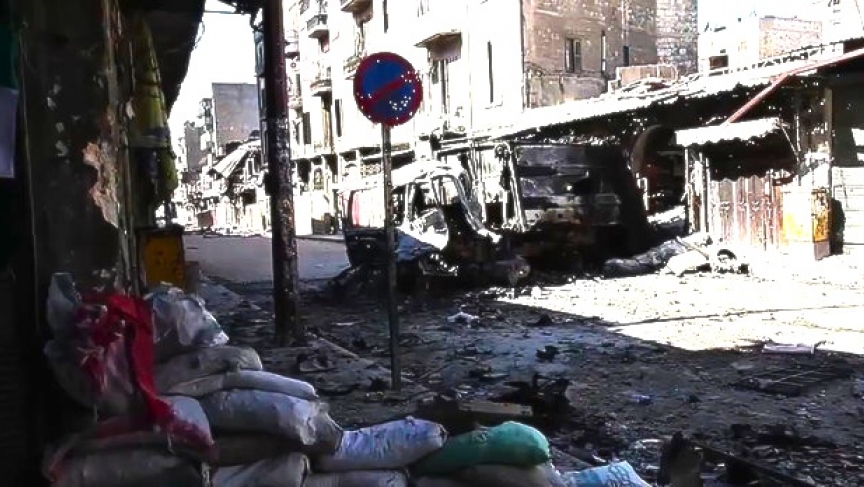 The aftermath of a 2012 car bomb in Aleppo, Syria. (Photo by Voice of America News via Wikimedia Commons.)

Anti-government insurgents in Damascus are believed to be behind a series of car bombings that killed at least 72 Syrians on Thursday.

The deadly explosions were just outside the headquarters of President Bashar al-Assad's ruling party and are said to be among the worst attacks to hit Damascus in the nearly two-year civil war.

But even though violence is moving closer to the seat of power, the rebels are too disjointed to consolidate their gains. Abigail Fielding-Smith, a reporter for The Financial Times, says the opposition movement isn't just divided.

"I think the whole opposition is so fragmented into so many different groups by political, military and then fragmentations within the military along ideological, personal grounds, so it's actually very difficult to talk about the coherent position of the opposition at all," she said.

But the movement is slowly moving into the capital, and taking control of nearby suburbs.

In order to get to those suburbs, Smith says, you have to go through a lot of checkpoints. And once you get to those checkpoints, there are "scenes of terrible devastation," with some places turned to rubble.

The devastation isn't close to the city center yet, Smith said. But it's creeping closer.

Smith, who's covering the action in Damascus from Beirut, Lebanon, says the opposition's weapons come from different sources.

"A lot of them are simply bought inside Syria. There's a flourishing internal arms market in Syria — a lot of which is coming from captured bases. So they're actually using weapons captured from the regime," she said. "I get the impression that it's the captured weapons that are making more of a difference than any deliveries from outside, but it is very hard to tell from Beirut."

Tony Bardran, a research fellow at the Foundation for Defense of Democracies, says the opposition is slowly moving into Damascus, which is Assad's stronghold, by moving into the close by Mezze Military Airport.

"The move now into Damascus has been a longtime coming. First they moved to Aleppo, which is the biggest city ... the economic center. They still haven't taken over entirely, but they've essentially pushed out most of the regime elites from there," he said.

Bardran says the nearly two-year-old conflict in Syria is similar to Lebanon's civil war in the 1970s, except the long-running Assad dictatorship have left the country's current population unaware of the idea of a constitutional democracy.