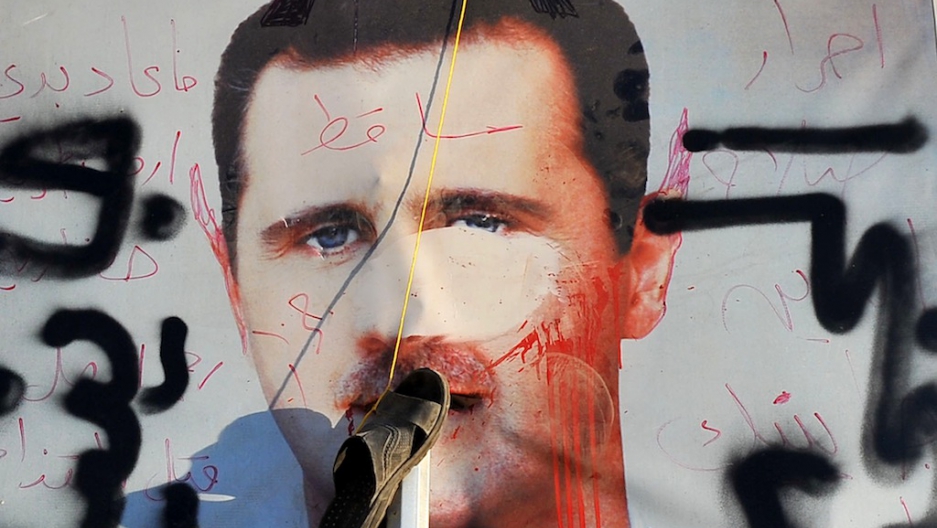 A slipper hangs on a vandalised poster of Syrian President Bashar al-Assad in Aleppo on July 24, 2012.
Credit: Bulent Kilic
Share

The Syrian regime is prepared to talk with its armed opponents, Foreign Minister Walid al-Moallem said on Monday, during talks with Russia's top diplomat.

"We are ready for dialogue with everyone who wants it .... Even with those who have weapons in their hands," Russia's Itar-Tass news agency quoted Moallem as saying, according to Reuters.

It was what observers say could be President Bashar al-Assad's government clearest offer yet it would negotiate with rebels fighting to overthrow it.

It was reported last week that National Reconciliation Minister Ali Haidar said he was ready to meet the armed opposition.

However, so far they have not found terms for talks on which either side could agree. Leaders of the Free Syria Army, or FSA, have said they want to see Assad leave office before talks can begin.

On Monday, US Secretary of State John Kerry questioned the sincerity of the regime's offer.

"It seems to me that it's pretty hard to understand how, when you see the Scuds falling on the innocent people of Aleppo, it is possible to take their notion that they are ready to have a dialogue very seriously," Kerry reportedly said.

Heavy fighting continued in Syria on Monday, with gunfire and a massive explosion reported in Damascus near the building where the ruling Baath party is headquartered. More than 53 people were injured in the blast, the Associated Press reported.

Even if the FSA agreed to terms for peace talks, getting other rebel factions in their disunited opposition to support them would be very difficult, says GlobalPost Senior Correspondent Tracey Shelton.

The opposition leadership is largely based outside the country and has little influence among the fighters on the ground, Shelton said, citing previous failed cease-fire attempts. They simply cannot guarantee that every rebel faction would put down their weapons, she added.

Leader of the Syrian National Coalition Moaz Alkhatib told Reuters from Cairo he has not been contacted about possible talks with Damascus. He delayed trips to the US and Russia, saying he'll "see how things develop."

Syria's civil war has been grinding on for nearly two years, claiming at least 70,000 lives, or as many as 90,000 by some estimates.