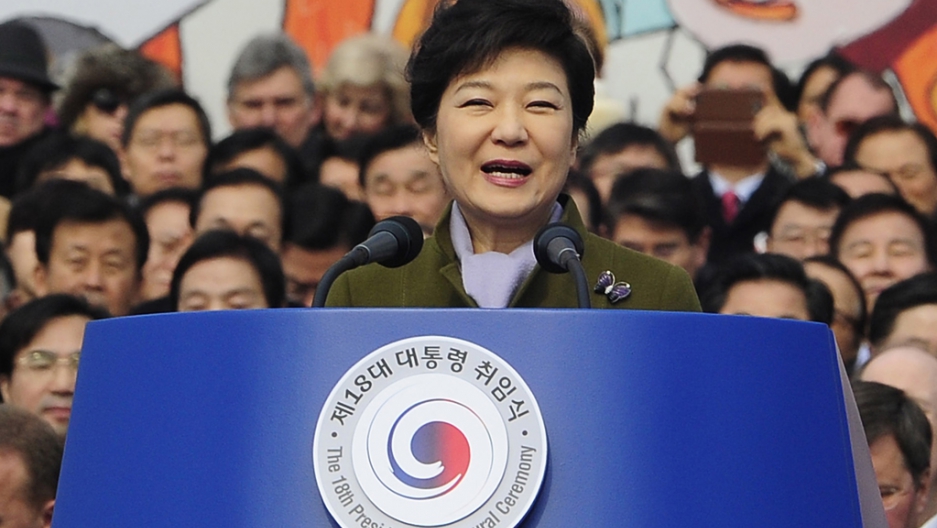 GWANGJU, South Korea — It is a chilly day in Gwangju, the cradle of South Korea’s political left, and home to what was once a boisterous democracy movement that fought military rule in the 1970s and 1980s.

That’s why many residents here look to Monday's inauguration of conservative Park Geun-hye — the daughter of the former military leader Park Chung-hee — with caution despite her popularity in other regions.

While the world watches her stance on North Korea, popular demand is rising for her to sew up economic and regional inequalities.

In a nation sharply divided by province, Park will need to address the political contentions of her family legacy when she takes office at midnight. With her approval rating at 44 percent — lower than any president starting out in the democratic era — some South Koreans worry she won’t lead effectively across regional and ideological lines.

“People say that the Korean peninsula is divided into two,” said Yang Deong-nam, a former militiaman who took up arms against the army during an uprising here in 1980. “But actually, if we keep fighting, we will be divided into three,” he said, referring to the schism between the more conservative and prosperous east and the agrarian and left-leaning west.

During her electoral campaign, Park Geun-hye promised to build a government more inclusive of the entire country, whereas previous presidents have stayed close to their cliques of patronage.

In her inaugural speech this morning, she also pledged to reinvigorate the slumping economy and create a second “Miracle on the Han,” a reference to the country’s rapid rise out of poverty.

That wording is, in some ways, a stroll down memory lane for older Koreans, even though she did not specifically mention her father. Park Chung-hee oversaw the economic success story when he ruled from 1961 until his assassination by his intelligence chief in 1979.

But Gwangju people begrudge the president’s particularly harsh repression of the city’s dissidents and artists who protested military rule. They also recount her father’s unwillingness to equally distribute the fruits of the economic phenomenon to Gwangju and the surrounding province, South Jeolla.

“Her father ran a Gestapo,” explained a tour guide at Gwangju’s memorial cemetery for fallen democracy activists. “He set up the club of military people who held onto power and killed Koreans, and they didn’t stop after he was president. Why should she be famous because of her father?”

Park has apologized for her father’s treatment of activists during his reign, although critics have called her stance vague.

The tour guide also referred to Gwangju uprising of May 1980, a tragedy often likened to China’s Tiananmen Square massacre.

Park Chung-hee was already deceased when the spectacle unfolded. But his successor, the military dictator Chun Doo-hwan, sent elite paratroopers to lay siege on the city, igniting a confrontation that left 200 and possibly more people dead.

The Gwangju uprising signified the boiling point after decades of repression against this rice-basket region. It’s an event that locals have eulogized in memorials, cemeteries and monuments.

Ideologues at the other end of the political spectrum don’t empathize with the plight of Gwangju. “The demonstrators were favorites of the communists,” says a former military informant who spied on student political groups at Cheonnam National University, a hotbed of activism, in the mid-1980s.

“We needed to fight North Korea throughout our history. Of course Park Geun-hye should not be ashamed of her father’s legacy, because he held them off, and so did Chun Doo-hwan,” she said. She asked not to be named, fearing threats and legal reprisals in her home north of Seoul.

A movement of netizens has emerged on conservative web forums such as Ilbe.net, backing Park Geun-hye’s campaign late last year and valorizing her father’s rule.

The site’s commentators have cultivated a right-wing renaissance, attempting to discredit the opposition in Jeolla province. They use derogatory slang words like "jwa-jom," or leftist “zombies,” to describe their ideological opponents.

More from GlobalPost: Korean food made me cry like a baby

They paint a favorable image of the president’s father and his success at holding the country together during tough times. "China and the Soviet Union remained undiminished, and most of all, South Korea confronted North Korea’s Kim Il Sung regime ... which was the most wicked and stubborn in the century,” one contributor wrote, justifying the need for a South Korean army strongman during that era.

Another post points to a newspaper clipping from the early 1980s, which claims that North Korean soldiers had infiltrated Gwangju after uprising. Chun Doo-hwan exploited this rumor to justify the crackdown.

Former democracy activists look at those comments with regret. “They keep saying we are North Korean sympathizers,” said Yi Jae-cheon, a former protester who recalls water torture and beatings at the hands of security forces for taking a central role in the democracy movement.

“We experienced it, everything that happened,” said Oh Jae-Yiel, an ex-demonstrator and director of the May 18 Memorial Foundation, a Gwangju-based nonprofit that commemorates the uprising. “The truth will be revealed in the end.”