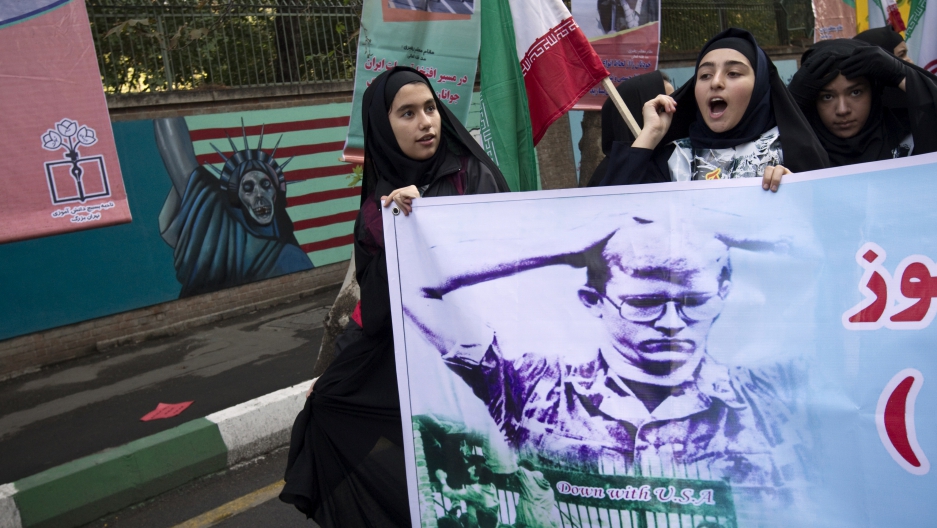 Iranian schoolgirls chant slogans while holding a poster depicting an American hostage during a rally outside the former US embassy in Tehran on November 4, 2010 as they mark the 31st anniversary of the capture of the embassy by Islamist students.
Credit: BEHROUZ MEHRI
Share

Iran has dismissed the awarding of an Oscar to the film "Argo" as an "advertisement for the CIA" and a Zionist plot to misrepresent an event arising from the 1979 Islamic Revolution.

"In a rare occasion in Oscar history, the First Lady announced the winner for Best Picture for the anti-Iran Film ‘Argo,’ which is produced by the Zionist company Warner Bros."

The Associated Press wrote that while "Argo" was not being shown in Iranian cinemas, bootleg DVD copies had created a buzz, with discussion divided along generational lines.

The film — depicting the escape of American Embassy staff from Tehran during the hostage crisis — has been roundly criticized by Iranians who took part in the Revolution, while those too young to recall events first-hand take a different view, the AP wrote.

The AP quoted Tehran City Council member Masoomeh Ebtekar — one of the students who occupied the US Embassy in which 52 Americans were held hostage for 444 days — as saying Argo exaggerated the violence during the storming of the compound.

Meanwhile, according to DPA, Fars and the Mehr news agency said the politicization of the award was exposed when Michelle Obama joined the presentation ceremony.

The agencies queried why the one-off guest appearance had "only happened when an anti-Iran film was awarded."

The Iranians weren't the only ones angered by the first lady's appearance.

"Forget separation of church and state - we need a separation of Hollywood and state," said conservative journalist Michelle Malkin, according to Fox News.

The left-leaning outlet Media Matters pointed out that though right-wing media took Michelle Obama to task for feeling "entitled" to intrude, she isn't the first to make an appearance while in the White House.

Former First Lady Laura Bush participated in the opening segment of the Academy Awards in 2002, while her husband was in office. In 1981, President Reagon, newly elected to office, appeared in a taped greeting for the Oscars from the White House.