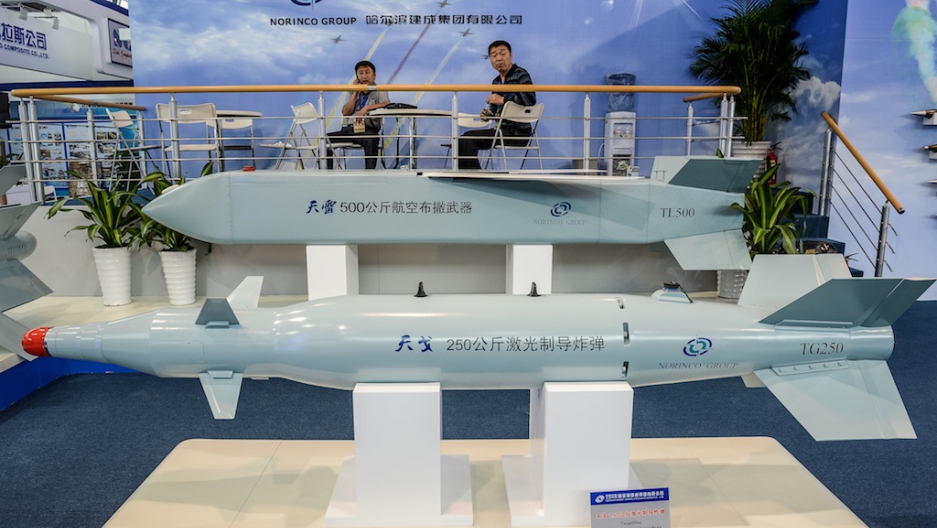 Men sit by a display of missiles models from Chinese manufacturer Norinco Group on the eve of the ninth China International Aviation and Aerospace Exhibition in Zhuhai on Nov. 12, 2012.
Credit: Philippe Lopez
Share

TAIPEI, Taiwan — Picture the China Poly Group Corporation as the first of a set of Russian nesting dolls.

Each of the larger wooden baubles represents a new line of diverse subsidiaries that shield its cloistered, princeling-controlled core.

China Poly Group Corporation is the parent of hundreds of subsidiaries — the exact number is a closely guarded secret. It has construction, real estate, resource extraction, fishing, military and entertainment firms. It also owns the world’s No. 3 art auction house.

It would be easy to describe the Beijing-based conglomerate as a bellwether firm in China’s state-dominated economic landscape. Its arms exports to troubled spots such as Myanmar or Zimbabwe make way for resource extraction projects for Chinese-owned firms. Its supremacy in Chinese cultural industries provides Beijing with an arm to export its “soft power” narrative overseas.

On the surface it looks like a state-run outfit that checks off all of Beijing’s political, corporate and military boxes. But that masks the fractious relationships within the cliques that make up the country’s ruling elite. Analysts say the reality is Poly’s one cog in a machine run by powerful vested interests that are often in direct competition with each other.

On any given day, observers say, Poly might ship arms to Zimbabwe or Sudan, announce plans to build a highway from Iraq to Syria or win China distribution rights for Ferrari or Maserati. The next day, it might hold a public offering on the Nasdaq for a movie distributor, win a lengthy exclusive fishing rights deal for Mauritius’ economic waters, be accused of bribing a former Namibian defense minister or get linked to missile sales to Iran or Saudi Arabia.

But, until recently, it was mainly known for Poly Technologies, China’s biggest arms exporter.

“Poly Tech has been on Amnesty [International]’s radar for a long time because of their arms shipments to conflict zones, especially Africa. There’s been an effort to shine a spotlight on Poly’s failure to apply any kind of international human rights standards to their exports of weapons,” says Frank Jannuzi, head of rights group Amnesty International’s Washington office and former Senate Foreign Relations Committee’s policy director for East Asian and Pacific Affairs.

“Skepticism about the Chinese to regulate their own arms trade is well founded when you have a company like Poly that is so diversified and has such strong connections, or ‘guangxi,’ with the Chinese leadership,” Jannuzi added.

Poly Group started in 1983 as a subsidiary of China International Trust and Investment Corporation (CITIC), a state-owned investment company. Set up at the behest of Deng Xiaoping in 1979, CITIC soon became one of China’s most influential financial and industrial conglomerates.

A 1997 report by Rand Corporation, a global policy think tank, called the investment firm “a front company for the PLA” (the Chinese People’s Liberation Army) and chastised Poly for illegally importing 2,000 AK-47 assault rifles into the US in 1996.

Deng installed Wang Jun, the son of a revolutionary elder, as head of both CITIC and Poly Group. Wang’s other claim to fame was a "Chinagate” subject, when it emerged the US Democratic Party had arranged for him to attend a coffee meeting at the White House in 1996 with former President Bill Clinton.

Deng’s son-in-law, He Ping, a former army major general, was made president of Poly, and is still listed as honorary chairman of the company, which is top-heavy with former high-ranking PLA officers or the relatives and allies of Deng.

Business was good until former President Jiang Zemin became so concerned about rampant corruption within the army that he ordered the divestment of their business interests in 1998.

Today, the state-owned Assets Supervision and Administration Commission of the State Council is supposed to control Poly, like all other state-owned enterprises, but observers say the move was largely cosmetic and the company is still run by former PLA officers and their relatives.

“Corruption in Chinese politics is so institutionalized. Back in the ‘80s, Deng told Party veterans that their time was up. If China was to modernize then it would need engineers, scientists and bankers,” said Parris Chang, a former Penn State professor and Taiwan National Security Council deputy director.

“He told them that if they left their military and party posts, they wouldn’t be shortchanged. ‘We will have ways to compensate you, and your children.’ This is part of the symbiotic relationship between government-sponsored businesses, the party and the government itself,” Chang said.

That’s helped fuel the emergence over the past two or three decades of a Chinese “military industrial complex,” he added.

“Poly and several others are engaged in [China’s military rise] through their arms sales and resource extractions abroad. When the US complained that Poly was selling arms to Iran, Saudi Arabia and other Middle East states, Deng asked them [Poly leadership] to come into his office and asked how much they made. When they replied that it was $2 billion, he said ‘not bad’ and the matter was dropped.”

It was the arms business where Poly first made its name — and earned a reputation for bending the rules.

“China’s international strategy is driven by market access to natural resources. Any priority that conflicts with those imperatives, whether it's honoring its own laws on freedom of expression or adhering to international sanctions or supporting heinous regimes like Sudan, Syria or Iran, then the Chinese have a conflict that needs to be resolved internally. Unfortunately, it’s usually resolved in favor of growth and access to raw materials,” said Amnesty's Januzzi via Skype.

While companies such as Poly have long been accused of providing arms to despots and low-interest loans in return for resource concessions, some observers say that doesn’t mean these deals are always carried out with the backing of Beijing.

“Poly isn’t particularly large by centrally controlled standards, which have three of the top 10 firms in the world. They don’t seem to be very specialized in anything and that makes a lot of people suspicious that this is essentially another PLA front company,” said Scissors.
Scissors says Poly’s often go-it-alone approach and reluctance to answer to officials on the ground is “completely normal” for Chinese SOEs with powerful connections. “What’s interesting about Poly is that [state assets watchdog] SASAC has been pushing companies to stop investing overseas in non-core businesses, but it’s still allowed to be heavily involved in a series of these fad industries.”

A common, albeit mistaken, maxim of Western media is that China is a country controlled by 12 old guys in a smoky back room, where all princelings, the state and Party are connected and working together. But some China watchers say that while there are times of cooperation, divisions and competition also run deep.

“The more you get into it, the more complex these relationships are. The reason they are so complicated is that, as they were being detached from the state, there were so many different hands in the pot and everybody got a piece of the action. It’s an extraordinarily complicated process,” said Curtis Milhaupt, a China legal expert at Columbia University. He testified in February’s congressional hearings on policy options for addressing Chinese state firms at the US-China Economic and Security Review Commission.

Curtis says China was bereft of the family-run conglomerates commonly found in other parts of Asia after the Chinese revolution, so the Party and its scions have substituted these missing family groups as the new economic power elite.

“Obviously there’s a big down side to that in terms of corruption, nepotism and this black box quality that China’s SOEs have. Trying to get to the bottom of it is very tricky. But when we say that these companies are controlled by the state, it really buries a huge amount of complexity and conflicting interests,” said Curtis.

But what isn’t so complicated is the type of support Poly’s businesses receive from the state. And when those interests collide, it’s not always the government that has the upper hand.

“Chinese politics is so polarized and fractured. The military-industrial complex and the so-called oil lobby are very powerful. Their views and interests are not always the same as the foreign ministry so they often don’t care about what the foreign ministry thinks. The foreign ministry doesn’t make the final decision anymore. This is why they can’t deliver on some of their promises,” said Chang.