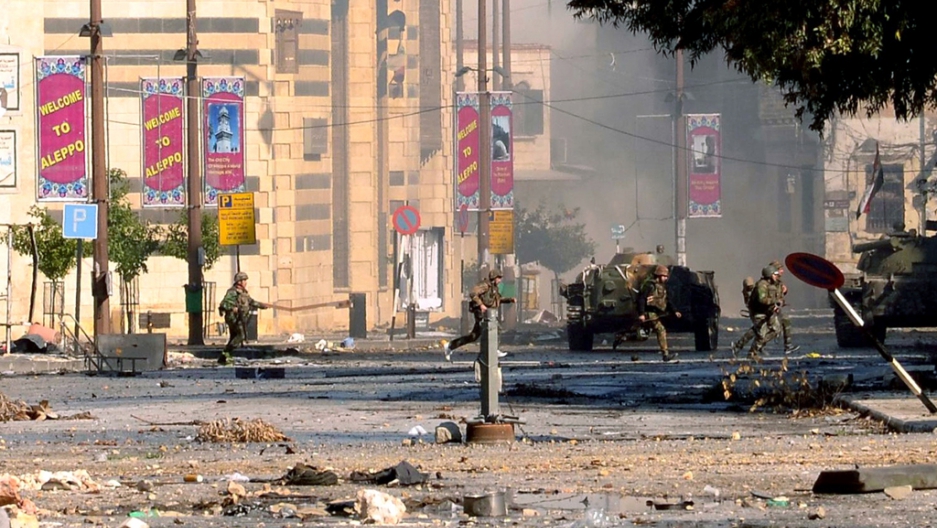 Syrian government forces cross a street in a district under their control in Syria's second city Aleppo on February 22, 2013. The United Nations says at least 70,000 people have been killed in the near two-year conflict, and puts the number of Syrians who have fled their homeland at more than 850,000.
Credit: -
Share

The Syrian National Coalition says it will boycott peace talks in protest at what it calls the "shameful" failure of the international community to stop the war in Syria.

Syria's biggest opposition group said it would not attend a Friends of Syria meeting in Italy, nor planned talks in the US or Russia, according to a statement cited by Al Jazeera.

The SNC accused other countries of failing to stop the "crimes committed against the Syrian people," and specifically blamed Russia for supplying President Bashar al-Assad's regime with weapons.

Activists reported yesterday that Russian-made Scud missiles had been fired on the city of Aleppo, killing at least 12 people and flattening dozens of homes.

More from GlobalPost: What it's like inside a Syrian government prison

The SNC also urged the US to live up to its claims to support democracy in Syria, saying that it had had enough of "statements that are not accompanied by action."

"The international silence on the crimes committed every day against our people amounts to participating in two years of killings," the SNC's statement said.

"The world has a responsibility to protect [Syrians] from a butcher who has been slaughtering them for two years," spokesman Walid al-Bunni told French TV. "If you are our real friends, help us to stop the massacres that are being committed against our people."

The SNC's decision effectively "torpedoes" any prospect of internationally-brokered negotiations between the Syrian opposition and Assad's government, the BBC said.

The coalition's president, Moaz Al Khatib, recently announced that he would consider direct talks with representatives of the regime, though the SNC remains divided over how far to engage with Assad's government while it still refuses to leave power.

Meeting this week in Egypt, the SNC said that it would shortly form a provisional government to manage rebel-controlled areas in Syria.