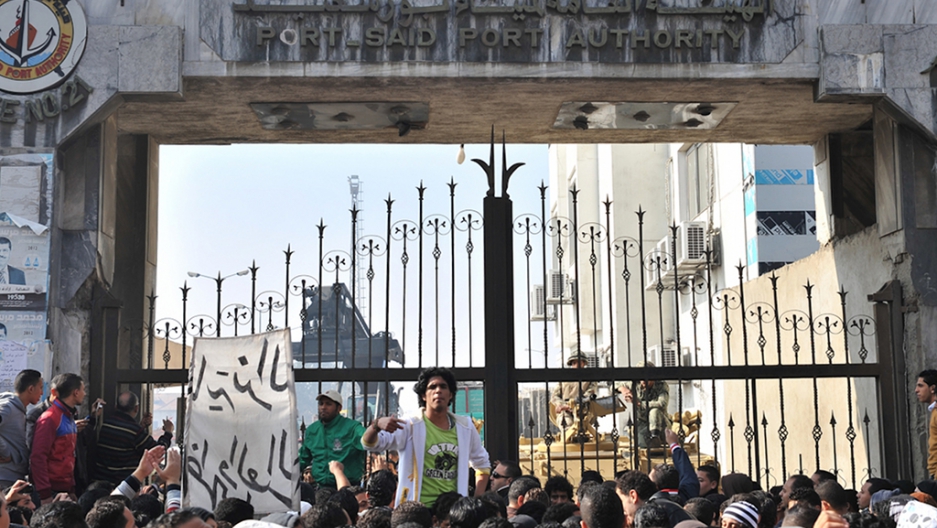 Thousands of Egyptians rally on Feb. 17, 2013, closing down government offices and factories in the Suez Canal city of Port Said, as they demand justice for dozens of people killed in clashes with police in late January after a court sentenced 21 soccer fans from the city to death over a deadly football riot last year.
Share

PORT SAID, Egypt — Rebellious residents in Port Said, home of the Suez Canal, are adopting a new style to protest the government.

Most shops, banks, universities, factories, and even the provincial government headquarters are closed after management and workers walked out in protest against what they say is government inaction over the killing of more than 40 residents by security forces here last month.

On Wednesday, workers at the Suez Canal Container Terminal, a transshipment center for the eastern Mediterranean, blocked the port’s entrance and halted all loading and unloading.

Ahmed Adel Masri, a 28-year-old unemployed civilian helping workers block the harbor, said the campaign has proved highly effective. “We’ve stopped traffic at the port,” he said. “And we’ll continue to exert pressure. The government will need to respond.”

The change in tack marks a notable transformation from Egypt’s most recent protests, during which both demonstrators and police used violent tactics in protracted street battles.

Many had speculated the uprising against President Mohamed Morsi’s administration would become increasingly violent, with protesters resorting to sabotage and the already shaky government relying on heavy handed security crackdowns.

A spasm of armed violence gripped Port Said last month, for instance, when 21 people were sentenced to death for their role in a deadly soccer riot in the city last year. Demonstrators fired weapons at the central prison and police forces responded with lethal force.

The battles lasted several days, after which more residents were rounded up and charged with crimes related to the violence — but on little evidence, rights groups say. No government investigation into the dozens of deaths has been launched.

January’s mini-insurrection prompted rumors of a near-total loss of state authority here. But the confrontation’s nature changed after protesters dramatically altered their strategy.

“Attacking the police is a losing game — especially with the lives already lost,” said Port Said resident Mahmoud Naguib, a 23-year-old activist member of April 6, a political movement formed in 2008 to support striking workers in the town of Mahalla. “The state is accustomed to this,” he added. “So civil disobedience is a much better tool — the economic losses are immense.”

International maritime traffic through the Suez Canal adds considerable revenues to Egypt’s dwindling foreign currency reserves. “But I don’t think the strikers will disrupt traffic in the canal — they know they would cripple the country,” said Ahmed Mahmoud Mohamed, a Muslim Brotherhood leader in the nearby province of Suez. “We are now under emergency law, so if it is disrupted, the army will intervene.”

One of the striking workers’ key demands is for an independent inquiry into the recent violence. Residents also want Morsi to apologize for describing the dead — the majority of whom were killed by police bullets, according to the Egyptian Initiative for Personal Rights — as armed thugs. Some are calling for the interior minister to resign.

Protesters say their civil disobedience — which has shut down the city — is a model for other towns. Similar calls for non-violent protest have been made in Ismailia, also on the Suez Canal, and in Alexandria on Egypt’s Mediterranean coast.

Strikers say removing violence from their protests has put the government at a loss over how to respond after it previously relied on security forces to quash rioting protesters.

The movement in Port Said is leaderless and organic, residents say. They have refused support from the country’s various political movements as employees take up strikes spontaneously. The only network linking the various protest groups — from factories to ports and banks — are the families of those killed in Port Said last month.

“It’s a small city, so people feel each other’s pain more intensely,” said Hassan Fareed, a lawyer from Sharqeya Province in the Nile Delta who traveled to Port Said to show solidarity with the strikes. “They are unified.”

During a protest outside the provincial headquarters on Wednesday, even government employees left the building to join the march, demonstrators said. Although the main courthouse is still functioning, the local lawyers’ syndicate has organized a protest in the city’s main square.

At the Suez Canal Container Terminal on Wednesday, workers arriving for their 6 a.m. shift witnessed army soldiers dragging an elderly protester across the road during an altercation between demonstrators and the military. The workers joined the strike on the spot.

“It made me so angry,” said a striking crane operator at the terminal, 27-year-old Mohamed Hussein. “Nothing has changed. Anyone can be beaten by the army now. So we stopped our work at the port.”

Residents say they’re unmoved by Morsi’s attempt to placate them by promising to allocate more funds to the city’s development.

It’s not about money, but dignity, they said.

“If there’s no violence,” said the Brotherhood’s Mohamed, “there is nothing to do but negotiate.”