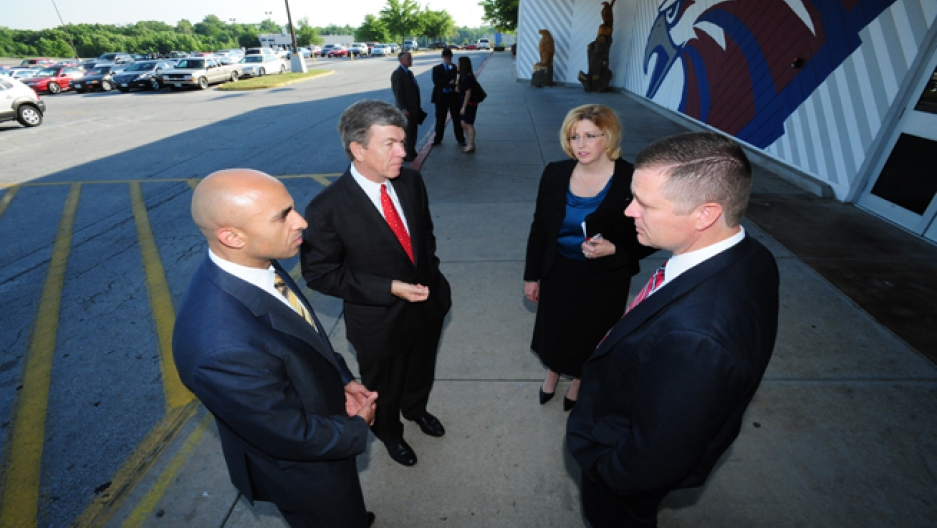 When a mile-wide tornado ripped through Joplin, Mo., in 2011, 161 people died and the town was left in ruins.

Two weeks after the tornado, the United Arab Emirates Embassy in Washington, D.C., contacted Joplin school officials asking how the UAE could help rebuild Joplin's high school and its main hospital, which were both torn apart by the storm.

Recently, the UAE donated enough money to build a new neonatal intensive care unit for the hospital and to provide a new laptop to every high school student.

Rajiv Chandrasekaran, senior correspondent and associate editor of The Washington Post, says the UAE's work in Joplin began when the country's crown prince saw video of the devastation on CNN. The prince told the country's ambassador to the U.S. to find out what the city most needed.

The UAE is a tiny, oil-rich state on the Persian Gulf that wants to expand its presence globally.

But there's a larger goal, Chandrasekaran said. In 2006, a Dubai-based firm attempted to buy a stake in a company that runs operations at six American ports. Protests in Washington scuttled the deal, Chandrasekaran says, becauyse many worried the UAE connection could pose potential national security issues.

The UAE's government is now working to convince Americans it isn't an enemy, but rather a key ally.

"They've fought with U.S. troops in Afghanistan, they supported U.S. and NATO efforts in Libya. They're a key player in anti-terror activity. They've been standing up to neighboring Iran, which is pursuing a nuclear program. They see this effort as part of a campaign in the United States to really try to convince Americans that they're not evil actors," he said.

Yousef Al Otaibam, the UAE ambassador to the U.S., has said talking wasn't going to be enough and the UAE needed to embark on a foreign aid campaign that resmbles what the U.S. has done in other countries, Chandrasekaran said.

For example, the UAE has also donated all-weather, artificial turf soccer fields in low-income areas of the United States.

"The UAE Embassy feels that by efforts like this in poor U.S. communities — in the south side of Chicago, in East Los Angeles, in Harlem  where they're building these soccer fields — that it's a small impact that they hope will stitch together to create a broader aggregate impact," he said.

But the embassy's efforts haven't been met with universal acceptance. Some conservative radio commentators have called the donations "Islamic blood money."

"You'll always have a fringe group of voices being critical of activities like this. I think the factual record will show that the UAE government has actually been very opposed to the Iranian nuclear program, but certainly that doesn't stop critics from trying to string various arguments together," Chandrasekaran said.

The students receiving the new laptops may not fully appreciate the source of the funds, Chandrasekaran says, but city leaders, school leaders, and those who run the hospital, are the key influencers the UAE government is hoping to reach.