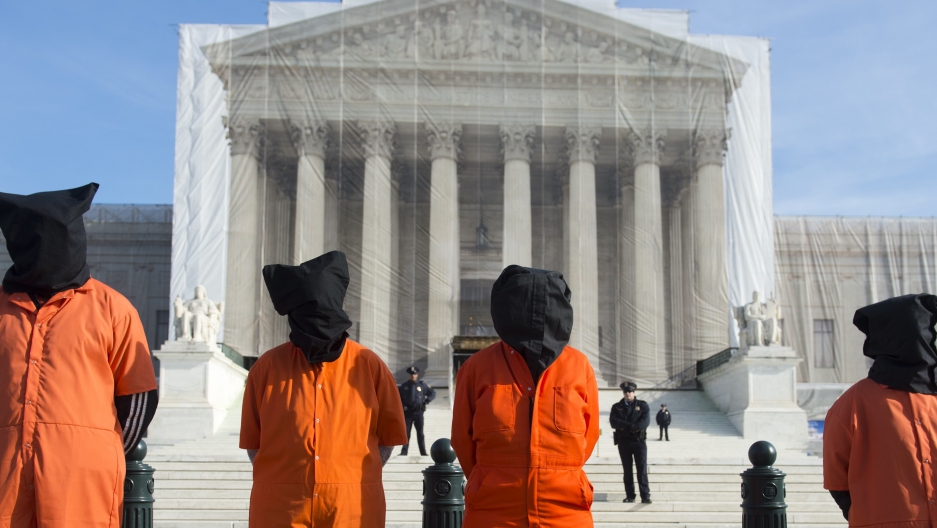 Protesters wear prison jump suits and hoods during an anti-Guantanamo Bay military prison demonstration in front of the US Supreme Court in Washington, DC, on Jan. 8, 2013.
Credit: Saul Loeb
Share

WASHINGTON, DC — Shaker Aamer has spent more than a decade imprisoned without charges.

Captured in Afghanistan in 2001 and brought to Guantanamo Bay in 2002, the British resident has come to epitomize for many critics the legal limbo and frustrations of the United States' controversial detainment camp.

Cleared for release by George W. Bush’s administration in 2007 and again by Barack Obama’s in 2009, the now 45-year-old Saudi Arabian-born Aamer nonetheless remains in captivity. Critics say that’s thanks to congressional obstruction and an administration reluctant to sacrifice political capital.

But Obama says America's war in Afghanistan is ending, shifting the fight against Al Qaeda beyond the traditional battlefield. That raises new questions about a gamut of controversial actions Washington commits in the war’s name — from drone bombings to locking up terror suspects, like Aamer, indefinitely at Guantanamo Bay.

"Not just for the Obama administration but Bush as well, the state of war has provided legal cover to do a lot of things, including indefinite detention," said retired Col. Morris Davis, the former chief prosecutor for the US Military Commissions at Guantanamo Bay.

"Whenever a 'state of war' ends, the legal justification has to end as well. It's either going to require the creation of a new justification or for the administration to take some different actions."

During last week’s State of the Union speech, Obama declared: "After a decade of grinding war, our brave men and women in uniform are coming home."

More from GlobalPost: Follow the handover in Afghanistan here

The president went on to signal a shift in the larger war on terror against an enemy that’s now "a shadow of its former self," but that is cast across broad swathes of land.

"Different Al Qaeda affiliates and extremist groups have emerged — from the Arabian Peninsula to Africa. The threat these groups pose is evolving. But to meet this threat, we don’t need to send tens of thousands of our sons and daughters abroad, or occupy other nations," the president said.

"Instead, we will need to help countries like Yemen, Libya and Somalia provide for their own security, and help allies who take the fight to terrorists, as we have in Mali. And, where necessary, through a range of capabilities, we will continue to take direct action against those terrorists who pose the gravest threat to Americans."

But legal experts believe this new phase of war should require a new legal framework.

"Congress has authorized a limited conflict against those responsible for 9/11 and those that aided or harbored them," said David Glazier, an international law professor at Loyola Law School in Los Angeles. "This should be Al Qaeda and the Afghan Taliban; it is not a blank check for the president to continually add other 'associated forces' to the mix to prolong the conflict."

Many experts like Glazier question the ongoing applicability of the Authorization for the Use of Military Force (AUMF), which was enacted a week after 9/11 and has served as the primary legal basis for the US military's response to the attacks.

But does the end of combat operations in Afghanistan and a weakened terrorist network blunt that authority?

"In past wars, Congress specifically expanded statutory authority to include additional groups within the scope of hostilities — it thus declared war five separate times in WWII, for example, against Japan, Germany, Italy, Romania and Bulgaria. No one seemed to think that the president could simply include other enemies within the existing conflict just because they were allied with current foes," Glazier said.

"So I think the first question becomes one of US domestic law — are we still in fact engaged in an ongoing conflict against an adversary that Congress has authorized hostilities against?"

So far, the Obama administration has cited the AUMF as justification for strikes against alleged terrorists in Yemen, Somalia and elsewhere in North Africa. Although, the threat posed by Al Qaeda in the Islamic Maghreb, or AQIM, remains unclear.

"My understanding is that at this time, there is no credible evidence that AQIM is a direct threat to the US homeland,” Hagel said at his Senate confirmation hearing.

In 2004, a plurality of the Supreme Court ruled in Hamdi v. Rumsfeld that enemy combatants — both in the United States and at Guantanamo Bay — must be given the ability to challenge their detention. So far, however, the court has declined to address the length of detention issue, which analysts say suggests it’s a political question that can only be resolved by Congress and the president.

"The Hamdi decision implied that US detention authority would persist as long as there was active combat in Afghanistan, but doesn't conclusively say that it must end at that point," Glazier said.

"The end of combat operations will give strong legal arguments that the authority to hold people also ends," said Thomas Wilner, a partner with Shearman & Sterling who represented Guantanamo detainees in the Rasul v. Bush and Boumediene v. Bush cases before the high court.

What is less ambiguous, at least according to legal scholars, is what should happen to those members of the Taliban detained by the United States.

"Any authority to detain Taliban personnel, other than those actually facing US criminal charges, absolutely ends with the end of a US combat role," Glazier said.

"It will require the end of the war against terrorism. And, as Colin Powell has pointed out, the US has created a 'military-industrial-terrorism complex,'" said retired Col. Lawrence Wilkerson, who served as chief of staff to then-Secretary of State Powell. "It will be very difficult to put that creation back in its cage."

Last week, Obama announced plans to halve the number of US soldiers deployed in Afghanistan over the year, part of Washington's goal to pull out almost all its troops by the end of 2014. The drawdown will occur in the shadow of the 2014 midterm elections, which could undermine what little interest exists to take action on a case that offers no political payoff.

"Soon you're going to have lawmakers, particularly on the House side where the more hard-core conservatives tend to be located — who will be coming up on re-election or someone will be trying to unseat them," Davis said. "No one is going to win saying 'I got the detainees out of Guantanamo,' so there's no incentive politically to do that."

More than 150 detainees remain in Guantanamo. Eighty-six have been cleared for transfer or release, and 46 are being held indefinitely. The military is currently prosecuting seven detainees before military commissions and plans to prosecute 24 others. Three detainees are serving sentences.

Obama has taken criticism for failing to fulfill his promise to close Guantanamo. The White House has said it’s not for a lack of trying.

Congress has continually blocked the release of the detainees approved for transfer or release, passing legislation preventing federal money from being used to bring prisoners to the United States.

"Congress has put the administration in a box canyon. It lacks the freedom of movement that it needs to get rid of the long-term detainees," said Eugene R. Fidell, who teaches military law at Yale Law School. "Congress has rendered it impossible to do anything with them."

"The drawdown of our personnel in Afghanistan is not going to change that unless Congress changes that or the president violates the legislative framework or the Supreme Court of the United States does something to break the gridlock," Fidell added.

In January, the president signed the National Defense Authorization Act, which mandates military custody for Al Qaeda-linked terror suspects, despite threatening to veto it over that and other provisions related to the prison camp.

Obama has blamed the legislative branch for preventing him from closing Guantanamo.

"There are some things that we haven't gotten done. I still want to close Guantanamo, we haven't been able to get that through Congress," Obama said during an appearance on Comedy Central's "Daily Show" with host Jon Stewart in October.

But critics say the president's continuing failure to take the lead is to blame.

"I have not seen in him a willingness to make this an issue that he's going to sell in the local elections," said Wilner, of Shearman & Sterling. "I think he truly feels Guantanamo is a joke and that it's a bad thing for the US, but he's unwilling to put prestige behind it. And there's always something more important. I think somebody needs to push him on that. Hopefully as his legacy becomes more important to him, he'll do it."

Signaling a possible move in that direction was an administration-approved speech by Jeh Johnson, former general counsel for the Defense Department, in the fall.

“In its 12th year, we must not accept the current conflict, and all that it entails, as the ‘new normal,’” Johnson said in a speech at the Oxford Union in November.

"I do believe that on the present course, there will come a tipping point — a tipping point at which so many of the leaders and operatives of Al Qaeda and its affiliates have been killed or captured, and the group is no longer able to attempt or launch a strategic attack against the United States, such that Al Qaeda as we know it, the organization that our Congress authorized the military to pursue in 2001, has been effectively destroyed."