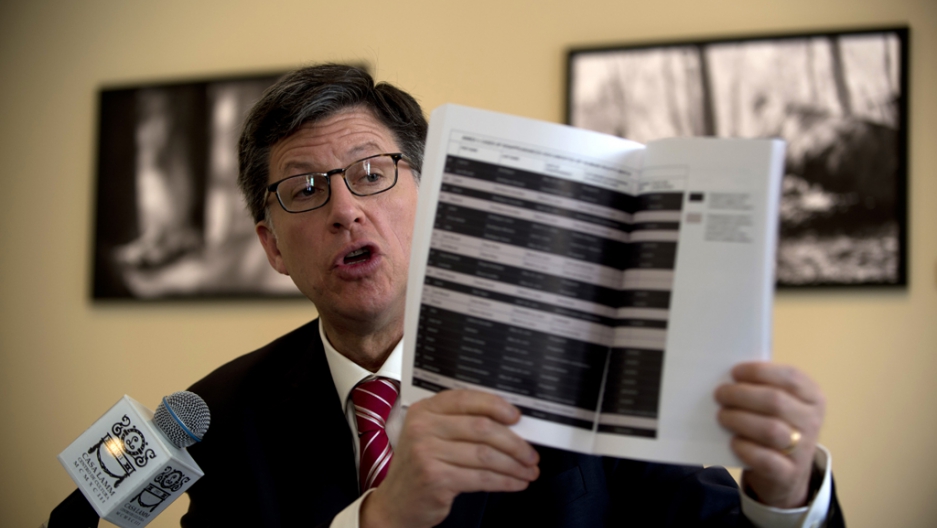 Jose Miguel Vivanco, Human Rights Watch's Americas division director, speaks to the press during the presentation of a report about missing people on Feb. 21, 2013. In a yearlong study released in Mexico City on Thursday, HRW documented 149 cases of federal, state and local security forces detaining people who have not been seen since.
Credit: Yuri Cortez
Share

The report focuses on “enforced disappearances” of civilians at the hands of both Mexico's naval infantry and the militarized federal police — forces that have won favor and hefty funds from Washington during the six-year campaign against the gangsters.

In the yearlong study released in Mexico City on Thursday, HRW documented 149 cases of federal, state and local security forces detaining people — mostly working-class men — who have not been seen since. The report blames Mexican marines, who have been patrolling landlocked city streets and rural communities for years, for at least 20 of the missing.

The Mexican drug war has made regular news largely for brutal killings. Weeks after taking office in December 2006, then President Felipe Calderon unleashed the military against Mexico's powerful criminal gangs, most of which thrive by smuggling illicit drugs to US and Mexican consumers.

Rather than a quick fix to a growing gang threat, security analysts say the Washington-backed deployment detonated a chaotic bloodbath that has claimed at least 70,000 lives — a death toll that rivals that of the ongoing Syrian civil war.

But thousands of people have also gone missing.

More from GlobalPost: Calderon's legacy of blood and busts

The disappearances documented in the report — 249 in total, including 100 in which the abductors could not be identified — represent only a fraction of those who disappeared amid the hyper violence.

Mexican government agencies last year had compiled a list of 25,000 disappeared people and a senior Interior Department official said this week that 27,000 may be missing.

Interior Secretary Miguel Angel Osorio Chong told reporters Thursday officials are still adding names to the list. But, he added, authorities are starting to face “a fundamental fact: few records, little proof, no protocol to deal with this.”

“This is a major problem that falls on the shoulders of the new government,” said Jose Miguel Vivanco, longtime director of Human Rights Watch's Americas division. “This is the result of a war without controls.”

“It's a government that seems well focused on the future of Mexico,” Vivanco said of Peña's administration. “But we also have to focus on the past.”

The report's release comes at a crucial time for Mexico's anti-crime efforts. Some fret whether the strong security cooperation Washington forged with Calderon will continue under Peña's government, while others worry that it will. Vivanco made it clear he hopes the report will have an influence in the Peña government's course.

“Our function, our labor as civil society, is to promote the debate,” Vivanco said.

Much of the nearly $2 billion in US aid and training provided to Mexico under the Merida Initiative has flowed to the quasi-military federal police force. But after operating independently during the past two Mexican administrations, the federal police have been returned by Peña to the control of the once powerful and feared Interior Department.

Mexico's navy, particularly the 18,000 marines, in recent years became the security force favored both by Calderon and by US officials, who praised its efficiency and honesty. A compact unit of Mexican navy special forces, trained by US Navy SEALs and marines, have become the go-to strike force to kill or capture major gangsters.

The report blames Mexico's navy for 20 disappearances in communities near the south Texas border. Among them are the arrests of Jose Fortino Martinez, 33, and five other men in the border city of Nuevo Laredo in early June 2011.

Marines broke through the front gate of Martinez's home shortly after midnight. After questioning him, releasing him and detaining him again, they spirited him away in the back of a pickup truck. Martinez's wife, Oralia Villaseñor, followed the marine's convoy as it crisscrossed the border city, tracking it finally to a downtown hotel that served as a base for the troops.

Villaseñor and relatives of the five other men being held by the navy that night watched as the marine's convoy left the hotel. The detained men haven't been seen since, according to the report.
After first denying that marines ever detained the men, the navy later said they had been detained but then released, the report said.

In at least 60 other documented cases, local police acted on behalf of criminal gangs, the report charges. Those cases include the 2010 abduction of a police chief and his 10 bodyguards in Apodaca, an important industrial suburb of the northern city of Monterrey, by police from a neighboring city. The 11 men haven't reappeared.

State and federal prosecutors routinely fail to seriously investigate the disappearances, the report alleges, forcing family members to do so on their own, often at the risk or retribution from gangsters or security forces.

“What is the greatest challenge? Investigation,” said Nik Steinberg, the researcher who did much of the legwork for the report.

“What doubt remains that Mexico suffers a security crisis?” Vivanco rhetorically asked reporters.
Peña has vowed a new strategy aimed at lessening the murders and kidnappings, shakedowns and assaults most plaguing ordinary Mexicans. But so far the shift remains a promise, with the military still battling supposed gangsters in the streets and several thousand gangland deaths tallied in the past few months alone.

In at least 60 of the documented cases, local police acted on behalf of criminal gangs, the report charges. Those cases include the 2010 abduction of a police chief and his 10 bodyguards in Apodaca, an important industrial suburb of the northern city of Monterrey, by police from a neighboring city. The 11 men haven't reappeared.

State and federal prosecutors routinely fail to seriously investigate the disappearances, the report alleges, forcing family members to do so on their own, often at the risk or retribution from gangsters or security forces.

“What is the greatest challenge? Investigation,” Steinberg said.

Citing a busy schedule, Peña declined to meet with Vivanco and other Human Rights Watch officials this week. But the group’s delegation spent 90 minutes Wednesday discussing the disappearances and how to investigate them with Interior Secretary Osorio Chong and his aides.

“They said they were going to look at these cases,” Vivanco said of the Mexican officials. “How long will it take? I prefer not to apply the math.”

Vivanco and his colleagues held similar meetings with Calderon and his interior secretary, pushing for action on 233 documented cases of killing, kidnapping and torture by Mexican soldiers presented in a November 2011 report. Despite similar assurances of action, Vivanco said Thursday, not one of the cases had been pursued.

“What doubt remains that Mexico suffers a security crisis?” Vivanco rhetorically asked reporters Thursday. “Mexico has the infrastructure and resources to solve the cases. The question is deciding whether it's a priority or not a priority.”