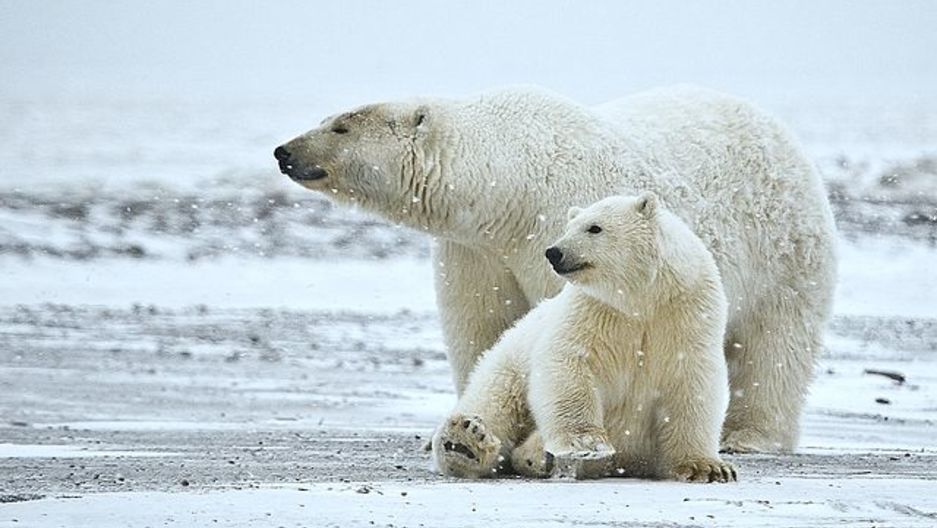 A female polar bear and her cub in the Arctic National Wildlife Refuge in Alaska would be at risk as sea ice melts. (Photo by Alan D. Wilson via Wikimedia Commons.)

As the Arctic Ocean sea ice rapidly diminishes, threatening the habitat and lives of polar bears and their prey, a group of researchers are arguing we may need to consider a large-scale supplemental feeding program to save polar bears from extinction.

The researchers published their proposal recently in the Conservation Letters journal.

Andrew Derocher, professor of biology at the University of Alberta and a long-time polar bear researcher, says there are 19 separate populations of polar bears in Arctic, but each one is experiencing different problems.

"Some of the populations are definitely undergoing stress with climate changes where the sea ice melts away, particularly those bears that live in the Hudson Bay system in Canada, but also the bears off of Alaska in the southern Beaufort Sea population," he said. "Other populations are quite secure and will continue to be so for quite some number of years into the future."

Polar bears need the Arctic ice for their survival because they live on and travel across the ice, undertaking long migrations each year to hunt Ring seals and Bearded seals, which can only be found where sea ice exists, Derocher said.

"We expect them to continue to lose their habitat in the south. They’ll persist for some longer period of time at very high latitudes, but of course it’ll be a much-diminished number of bears than we have today," he said.

A study by the U.S. Fish and Wildlife Service estimated that the world will lose two-thirds of the global population of polar bears by midcentury.

In the paper, Derocher and his colleagues outline a potential solution for saving the polar bears — by rehabilitating the starving bears through supplemental feeding and then reintroducing them to the wild.

"To put it into perspective, we feed other species to keep them alive as well. So if you go into a European context, their equivalent of our Grizzly bear, the Brown bear, there are populations that are fed all the time to keep a viable population in an area — and to keep them away from humans as well," he said. "So it's not unheard of and you can see the hand of humans in conservation of many species."

Because the polar bear's prey is also endangered, Derocher says, conservationists are looking at alternative food sources, like a polar bear chow, similar to what would be fed to a polar bear in the zoo.

"In some places down the road, we may be looking at what we would call a semi-wild bear park model," he said. "What we would hope is that we wouldn't have to support the bears fully ... but this would be sort of a means of keeping the population more viable."

The challenge the polar bears are facing is greater than many other species because sea ice is diminishing at an alarming rate, Derocher said.

"The whole field of conservation biology hinges on the idea that you have the habitat of the species in place, so that you can actually keep them alive in the wild," he said. "What we’re hoping is we're going to hold onto some bears at very high latitudes in the Canadian Arctic and probably in Northern Greenland and that that might be the sort of nucleus of an expansion of a population perhaps hundreds or thousands of years from now."

Derocher says humans also need to deal with their own overpopulation and excessive use of fossil fuels.

"Until we can deal with those two issues, the future for polar bears is definitely going to be challenging. But it's not just polar bears. It’s going to be so many other species and ecosystems that are going to be pressed so hard by climate change. At the end of the day, the climate’s warming, polar bears are going to be one of the clear victims of it," he said.