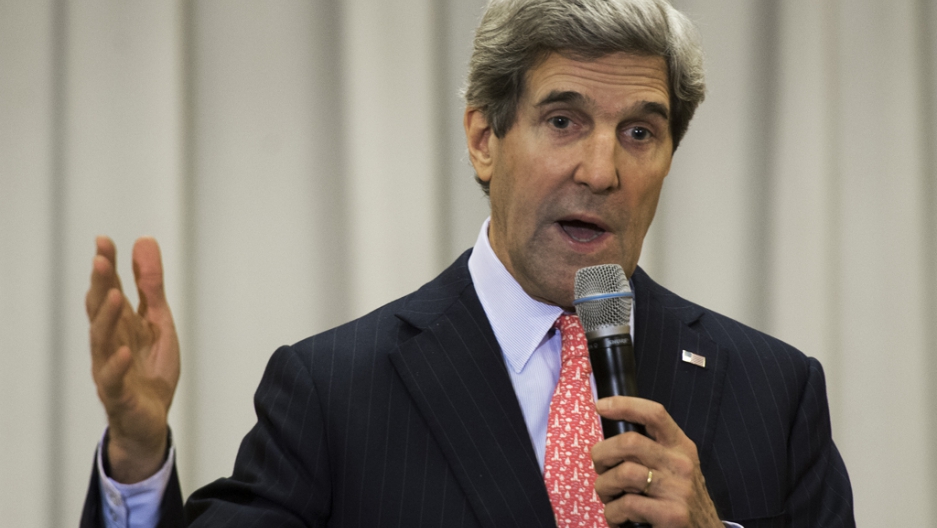 US Secretary of State John Kerry delivers remarks on foreign policy, highlighting his key objectives, as he begins his duties as secretary on Feb. 7, 2013, at the US State Department in Washington, DC.
Credit: Paul J. Richards
Share

BUZZARDS BAY, Mass. — He is the epitome of suave sophistication, a diplomat’s diplomat. John Kerry was so uncontroversial a nominee to head the State Department that even in the ultra-partisan world of Washington politics only three senators could be found to vote against him.

The new secretary of state is losing no time in setting out his foreign policy agenda, first in a major speech at the University of Virginia, then with a two-week “listening tour” to cement ties with allies and explore solutions to some of the thorniest foreign policy problems facing the United States.

In Charlottesville, Va., on Wednesday, Kerry paid tribute to his predecessor. No, not the widely acclaimed Hillary Clinton, but the even more greatly venerated inaugural diplomat, Thomas Jefferson, the first secretary of state and the university's founder.

Kerry devoted the bulk of his 50-minute speech to explaining why foreign policy made good economic sense in today’s increasingly competitive world. No country can exist in a vacuum, and without access to world markets the US cannot grow and prosper, he emphasized.

In fact, in Kerry’s verbiage, diplomatic installations take on the distinct coloration of trade missions.

“You have a company up near Dulles called Orbital Sciences Corporation,” Kerry told the assembled teachers and students at Old Cabell Hall. “With the help of the persistent advocates at our Embassy in Bangkok, it beat out French and Russian competitors to build Thailand’s newest broadcast satellite …. The deal our embassy helped secure is valued at $160 million, which goes right back into American communities from coast to coast. That’s the difference our embassies abroad can make back here.”

There is also the added advantage of spreading American values and building friends where there once was conflict.

“One of America’s most incredible realities continues to be that we’re a country without any permanent enemies,” said Kerry, who served in Vietnam. “I will never forget standing next to John McCain in the East Room of the White House, each of us on either side of President Clinton as he announced the once unthinkable normalization of our relations with Vietnam.”

The chief of Foggy Bottom sounded a cautionary note about the looming budget crisis, which, he said, would pose a distinct danger to America’s standing abroad.

“I’m particularly aware that in many ways the greatest challenge to America’s foreign policy today is in the hands not of diplomats, but of policymakers in Congress,” Kerry said. “It’s often said that we can’t be strong at home if we’re not strong in the world, but in these days of a looming budget sequester that everyone wants to avoid, we can’t be strong in the world unless we are strong at home. My credibility as a diplomat working to help other countries create order is strongest when America at last puts its own fiscal house in order.”

Kerry was full of enthusiasm for his colleagues, but the top diplomat may need a little geography brush-up before he sets out to some of the more obscure outposts in his domain.

“The brave employees of State and … work in some of the most dangerous places on earth,” he said. “They fight corruption in Nigeria. They support the rule of law in Burma. They support democratic transitions in 'Kyrzakhstan' and Georgia, mindful from our own experience that it takes a long time to get democracy right, and that it rarely happens right away.”

The transcript prepared by the State Department says “Kyrgyzstan,” a small, largely agricultural country in Central Asia with Bishkek as its capital. But the country described by Kerry sounded a lot more like Kyrgyzstan’s much richer and larger northern neighbor, Kazakhstan, immortalized in the film “Borat.”

But small quibbles aside, Kerry sought to make a strong case for a renewed emphasis on foreign policy.

“Let me be very clear: Foreign assistance is not a giveaway. It is not charity. It is an investment in a strong America and free world.”

Kerry sets out for his first trip as secretary of state on Sunday, in a nine-country tour that will take him to Europe and the Middle East. A major focus will likely be the civil war in Syria, which has been grinding on for nearly two years. Kerry said earlier this month the Syrian conflict has claimed as many as 90,000 lives.

The US has recognized the Syrian opposition, but has stopped short of enforcing a no-fly zone to protect opposition groups from government airstrikes, similar to the one that eventually brought down the regime of Muammar Gaddafi in Libya in 2011.

Kerry is expected to meet with the Syrian Opposition Coalition in Rome, and to also discuss what can be done when he visits regional players Turkey, Egypt and Qatar.

“He’ll look forward to hearing from the Syrian Opposition Coalition, what more they think we can do, and also to hear from counterparts who are deeply involved in supporting the opposition," State Department spokeswoman Victoria Nuland told the media on Tuesday.

Kerry will also speak in Paris about recent events in Mali, where France's military continues to battle against Al Qaeda-linked militants fighting to seize vast swathes of the African country.

But Kerry's itinerary leaves out a major US ally; he is not scheduled to visit Israel or any of the Palestinian territories.

According to the State Department spokeswoman, this is because Israeli Prime Minister Benjamin Netanyahu is still in the process of forming a government after Israel’s recent elections.

Some have speculated that Netanyahu is being punished for his overly friendly relations with Republican presidential candidate Mitt Romney, who was a longtime friend and colleague of the Israeli leader.

But it's more likely that Kerry the good soldier does not want to steal the president’s thunder; Barack Obama is scheduled to visit Israel for the first time next month. Kerry will accompany him at that time, for what observers expect will be a “reset” of the relationship between the two leaders.

In the meantime, maybe the secretary of state can concentrate on figuring out where “Kyrzakhstan” is.