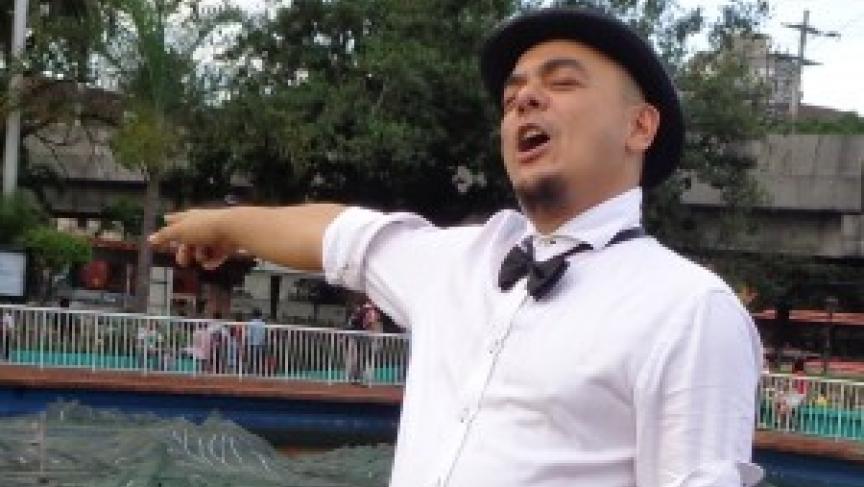 Carlos Celdran, a Manila-based performance artist and social activist, was jailed for his protest against the Catholic Church. (Photo by Jason Strother.)

The Roman Catholic Church is a powerhouse in the Philippines, but the recent passage of a controversial law that provides free contraception has called into question the church’s social and political influence.

It’s also put the spotlight on activists who have been challenging the church’s power.

Carlos Celdran, 40, is a Manila-based performance artist and social activist, which often puts him at odds with the Catholic Church in the Philippines.

In 2010, one of Celdran’s demonstrations got him into serious trouble. It was inspired by a classic 19th century Filipino novel, Noli Me Tángere — Touch Me Not.

“The antagonist is a man named Father Damaso,” Celdran said. “That bad priest used his powers of the church to abuse the people around him and get what he wanted. So I wrote the name Damaso on a placard, I entered the church and presented that placard in front of all the bishops of the Philippines.”

Celdran told church officials they should stop meddling in government affairs. That stunt got him arrested. In January, he was convicted of offending religious feelings and faces up to a year in prison. He’s filed an appeal.

Celdran says he wanted to draw attention to reproductive health legislation in the Philippines — known as the RH bill — which the Catholic Church tried to block for more than a decade. But this past December, lawmakers finally approved the legislation. Celdran says he couldn’t be happier.

“The RH bill has become RH law. That was my objective when I entered the church — objective accomplished. It was worth every moment, jail time or not,” Celdran says.

An estimated 80 percent of Filipinos are Catholic, and the Church has been the nation’s spiritual center since colonial times. But some observers say its moral and political influence is not what it used to be.

“The Catholic Church holds many schools in the entire country, that’s where they infuse their ideas. But we can see that these schools are no longer the sole venue or platform for information or ideas,” said Maria Lourdes Rebullida, who lectures in politics and religion at the University of the Philippines in Quezon City.

He says television and networking are bringing in a lot of western, non-Filipino, ideas, such as divorce, which is still banned under Filipino law.

Red Tani, who heads the secular activist group Filipino Freethinkers, says the stage is set for breaking that remaining taboo. He says politicians who are sponsoring bills to legalize divorce can appeal to the public on economic terms.

“I think it will be a lot easier battle than the RH battle because, in terms of divorce, you don’t have to put a budget on it,” Tani said. “It’s going to be a purely human rights issue, an issue of personal choice.”

Even staunch church supporters, like Anthony Perez, founder of the group, Filipinos for Life, admit that many Catholics are pulling away from the Church, while other religious groups are drawing them in.

“The church is in a crossroads today,” Perez said. “The parish priests are losing their members to the charismatic groups. The Church has to recognize the change of paradigm.”

Perez says last week’s resignation of Pope Benedict might help turn things around. Perez says he hopes the next Pope will re-energize the Church and bring Filipino parishioners back — not only to the pews, but also to their traditional, Catholic values.