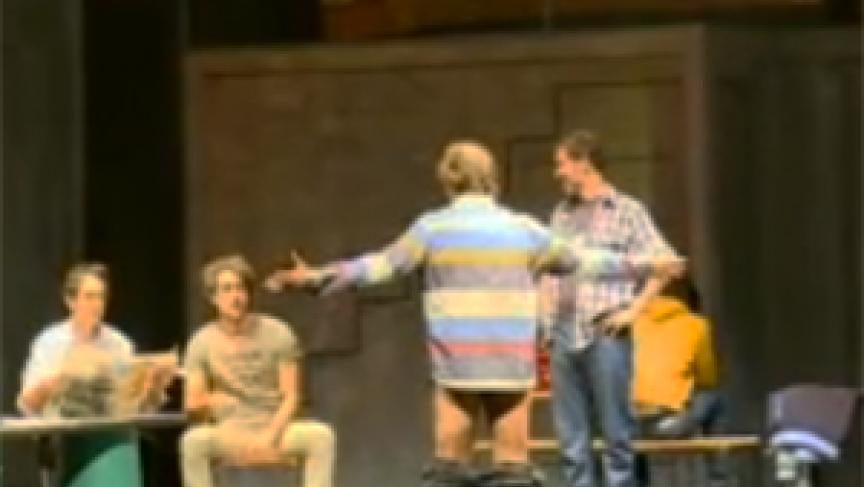 The Italian cast of "The Full Monty" rehearses. (Photo: BBC)

Share
As Italian politicians campaign for national elections this weekend, the sad state of the economy and politics in Italy are the subject of a new stage adaptation of "The Full Monty." It features two real-life unemployed workers as cast members. Megan Williams attended the show in Rome, and has this report. Among the main candidates campaigning to lead Italy are the current prime minister, Mario Monti, and his scandal-tainted predecessor, Silvio Berlusconi. Monti took over from Berlusconi with a mandate to get Italy's crippling debt under control. The austerity measures, tax hikes and pension reforms that followed have left many Italians deeply unhappy. Unemployment is at record high levels: 11 percent overall, 30 percent for young people. And unemployment is also the theme of new Italian stage adaptation of "The Full Monty," the British film about unemployed steelworkers who turn to stripping to raise money. "I thought to bring on stage some part of reality," said Massimo Piparo, director and producer of the Italian production. Piparo has put up his own money to bring The Full Monty to Italy at a time when Italians hardly feel like laughing about unemployment. " I think in this moment in Italy a lot of people are thinking, 'What can I do to make money instead of following the job I had?'" said Piparo. Originally, "The Full Monty" was set in the industrial decline of northern England. To reflect the Italian reality, the setting was shifted to the northern Italian city of Turin, home to the FIAT car company. FIAT is a major employer which has laid off thousands of workers in recent years. And to inject more Italian "realismo" into the show, Piparo auditioned real-life unemployed men for lead roles. One of the two who landed a part was carpenter Simone Lagrasta. The short, wiry 24-year-old had just lost his latest job when he was stopped by a casting agent after signing up to work as a carpenter in Finland. Like thousands of young people here, he was ready to leave Italy. He said being in the musical has fulfilled a dream, and not just because his role involves sexily clad women ripping off his pants. It's also pulled him out of the unemployment blues. "I think this is a great project," said Lagrasta. "For me the show is about the drive to just keep going, to not let the recession get you down, and to even fight your way out of it." Another former unemployed worker who's now a "Full Monty" actor is 38-year-old Marco Sarafini. He sold hair salon products until his business dried up last year. He, too, dreamed of being an actor, but never expected his slide into joblessness would be reversed by swinging his hips in a red thong. "It's all the fault of the spread," said Serafini, referring to the English word that's dominated Italian headlines for the past year. "The spread" is what economists call a key indicator of the Eurozone crisis, the worrisome gap between German and Italian bond yields. When the cast belted out the chorus of "Spread! Spread! Spread!" there was laughter and applause in the theater. It was clear from the reaction that the Full Monty resonates with Italian audiences. Director Massimo Piparo said that, as politicians campaigning for Italy's upcoming elections make unrealistic promises of tax refunds and job security, he hopes Italians get more out of the show than mere enjoyment. "The show is a little suggestion. Stop promises, do something… concrete, something real," said Piparo.