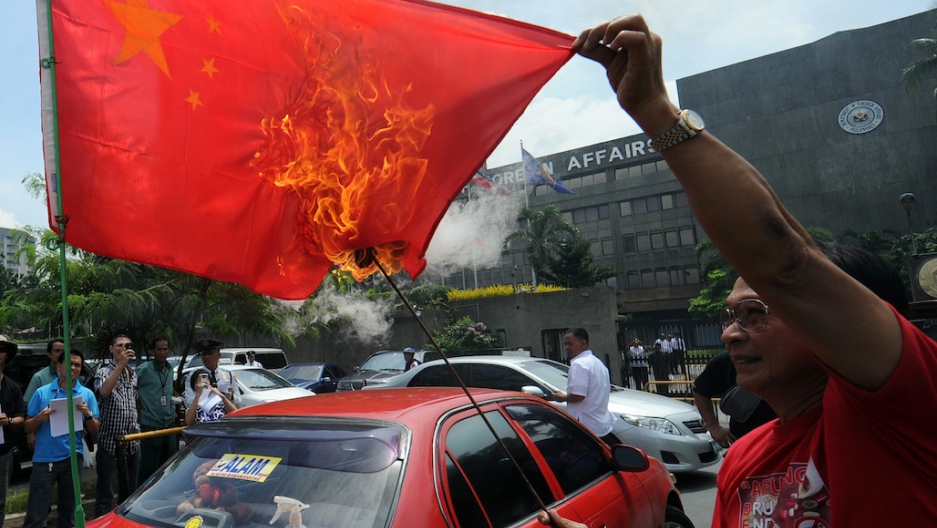 A Filipino activist burns a Chinese flag during a protest in Manila on July 27, 2012, amidst the heightening tension between the Philippines and China over the disputed South China Sea.
Credit: TED ALJIBE
Share

Both the Philippines and Vietnam are irate over knick-knacks produced in China and exported into their soverign territories.

Why? Because they bear maps or titles that depict Asia as China's government sees it, i.e., with almost all of the oil-rich South China Sea belonging to China.

Both Vietnam and the Philippines claim large swaths of the sea, which lies in their aquatic backyard.

China, located much farther away, insists it should run the sea because, well, Chinese seafarers traveled there as early as the 2nd century. (See "Temperature Rising in the South China Sea" at GlobalPost for a fuller breakdown of this highly contentious conflict.)

Enter the globes. As The Philippine Star reports, made-in-China globes that mark the sea as Chinese territory were discovered in National Bookstore, a franchise similar to Barnes & Noble. Under government pressure, the store yanked the globes from its shelves.

They were selling for about $2.40. Made-in-America globes, which depict the Philippine government's perspective, are apparently selling for nearly $50. At those prices, the Chinese globe costs a working-class mom in Manila a few hours of work. The American one costs a week's worth of labor.

What's Sansha? The Chinese word for its newly established oceanic province that lays claim to most of the sea. The police in northern Vietnam felt it necessary to hand out pamphlets printed with the "Sansha" characters to locals so they could rid the streets of the improper lanterns. According to Thanh Nien, residents either tore down the lanterns or pasted over "Sansha" with yellow stars.