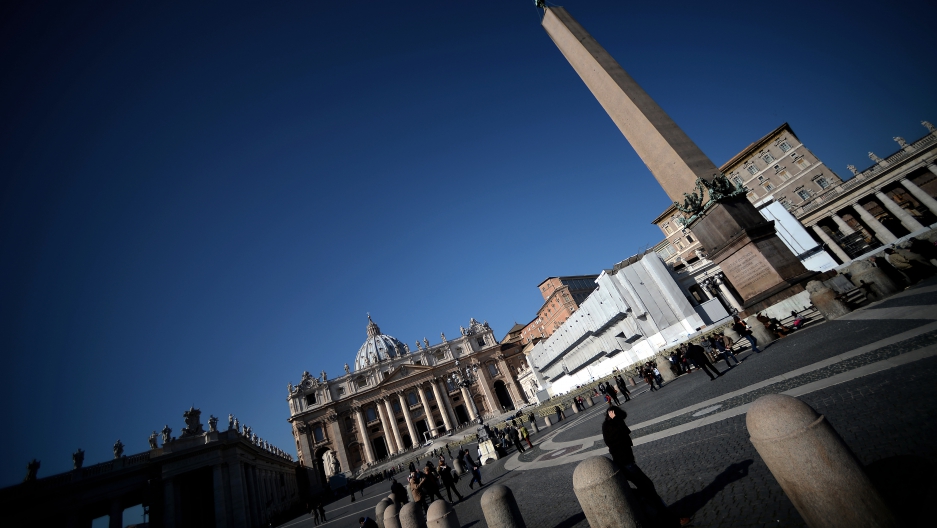 People walk in St. Peter's Square in front of the St. Peter's Basilica on February 19, 2013 at the Vatican City. Pope Benedict XVI will be hosted in the convent of Mater Ecclesiae (Mother of the Church) offering him a substantial four-story modern home complete with contemporary chapel, garden and a roof terrace looking out from a rise dominated by the Holy See's TV transmission tower. Pope Benedict XVI began a week-long spiritual retreat out of the public eye on Monday ahead of his resignation on February 28 with the field of candidates to succeed him still wide open.
Credit: Filippo Monteforte
Share

The dramatic news of Pope Benedict XVI's resignation came just days before the release of thousands of pages of court documents related to the sex abuse scandal that engulfed the late founder of the Legion of Christ Fr. Marcial Maciel Degollado.

The case is set in a Rhode Island courtroom put forward by the niece of a wealthy widow who is suing the Legion over the $30 million her aunt donated to the group, alleging that her aunt was misled and ultimately defrauded by the Legion. The Vatican is not a defendant in the court case. But serious questions about the role of the Vatican, under Benedict and his predecessor Pope John Paul II, in the Maciel affair are arising out of the documents.

Four news organizations, including the National Catholic Reporter (NCR), petitioned for the court files and were provided access. Over the weekend, I pored through the documents and the following is an excerpt from an in-depth analysis of the documents and what they reveal, a rare glimpse inside the cult-like Legion culture shaped by the Mexican-born Maciel:

Newly released documents in a Rhode Island lawsuit show that the scandal-tarred Legion of Christ shielded information on their founder's sex life from a wealthy widow who donated $30 million over two decades.

In 2009, the widow's niece, Mary Lou Dauray, sued the Legion and the bank that facilitated key transactions, alleging fraud. At Dauray's request, backed by a motion from NCR and three other media outlets, Superior Court Judge Michael Silverstein revoked a protective order the Legionaries had secured and released discovery findings Friday.

The thousands of pages of testimony, financial and religious records open a rare view into the Legion culture shaped by its Mexican-born founder, Fr. Marcial Maciel Degollado.

Maciel built a power base in Rome as the greatest fundraiser of the modern church. He won the undying support of Pope John Paul II, who called him an "efficacious guide to youth" and praised Maciel in lavish ceremonies even after a 1998 canon law case at the Vatican in which the cleric was accused of sexually abusing Legion seminarians.

The Vatican is not a defendant in Rhode Island, but decisions by John Paul and Pope Benedict XVI permeate a larger story rising from the files.

A key strand in the new material aligns with an admission by Cardinal Franc Rodé, who told NCR in a recent interview that "in late 2004 or early 2005" he saw a videotape of Maciel "with a mother and child represented as his." A Legionary, whom Rodé did not identify, showed him a tape of Maciel with a girl identified as his daughter.

The cardinal did not confront Maciel about paternity, but says he told a Vatican canon lawyer who was under orders from Cardinal Joseph Ratzinger, then head of the Congregation for the Doctrine of the Faith, to investigate the pedophilia accusations. On that front, Ratzinger, as Pope Benedict, dismissed Maciel from ministry in May 2006, but the Vatican communiqué did not specify why or acknowledge the victims. Those explanations only came in 2010, after a Vatican investigation of the Legion prompted by news reports of the order's disclosure that Maciel had a daughter, a fact the Vatican had known since 2005.

Two sons by a second woman, with whom Maciel had a longstanding relationship, came forward later.

The Rhode Island documents, coming less than a week after Benedict announced his resignation from the papacy, add another chapter to the scandals that apparently were on his mind when, in his final public Mass as pope, he spoke of the face of the church that "is, at times, disfigured."

Fluent in French, Gabrielle Mee was conservative and refined; she felt she had found a spiritual home with the ultra-orthodox Legionaries for her twilight years. She became a consecrated woman in the order's lay group, Regnum Christi, living in a religious home while steadily ceding her enormous wealth to the Legion by giving power of attorney to Fr. Anthony Bannon, an Irish-born Legionary who divided his time between Connecticut and Rhode Island.

Like everyone else in the order's closed environment, Mee was taught that Nuestro Padre, as Maciel was called, had his enemies, but that he was a living saint for his leadership as an evangelist, drawing the church back from liberal abuses of the Second Vatican Council and attracting young men to a strict religious life. That was the Legion message.

By all accounts, she believed that message until her death at 96 in May 2008, just four months after Maciel's funeral in Mexico. She never knew Maciel had sired three children, two of whom, as previously reported in NCR, he secreted into private papal Masses celebrated by an apparently clueless John Paul.

At his death, the Legion website announced that Maciel had gone to heaven. Yet at that very time, Fr. Luis Garza and other top Legionaries were scrambling to decide how, and when, to reveal that Maciel had a grown daughter -- a fact the Vatican had known for three years.

Mee had long embraced the Legion's public campaign against nine men who in 1997 accused Maciel of abusing them as seminarians. This is referenced in a bank document.

Mee's husband, Timothy, was on the board of trustees of Fleet Bank. By the time he died in 1985, he had established a charitable trust in his name and a separate trust for Gabrielle. Three years later, she gave her first donation of $1 million to the Legion after her close friend Marguerite Garrahy, a former first lady of Rhode Island, spoke favorably of the Legion. Mee and Garrahy attended daily Mass together.

Bannon immediately notified Maciel in Rome of the million-dollar gift. But, he insisted in a deposition, "I did not control her checkbook."

Maciel made a practice in Mexico of cultivating wealthy widows and the wives of wealthy men. The Legion prep schools catered to affluent families, recruiting parents to Regnum Christi. The schools fed young men into the Legion. Bannon, referring to Mee, also testified on how Regnum Christi and Legion members donate their own assets to the order:

She would assign the management of those assets to somebody she trusts, and then before taking her final commitment would decide what is to be done with those assets. When there are assets that come as an inheritance, the same. ... It's my belief in the premise, and the way I've always acted is a person's assets is something God has given to him through family or through their own good work, and they are the owners and managers of that, and it's up to them to see what God wants them to do with the money.