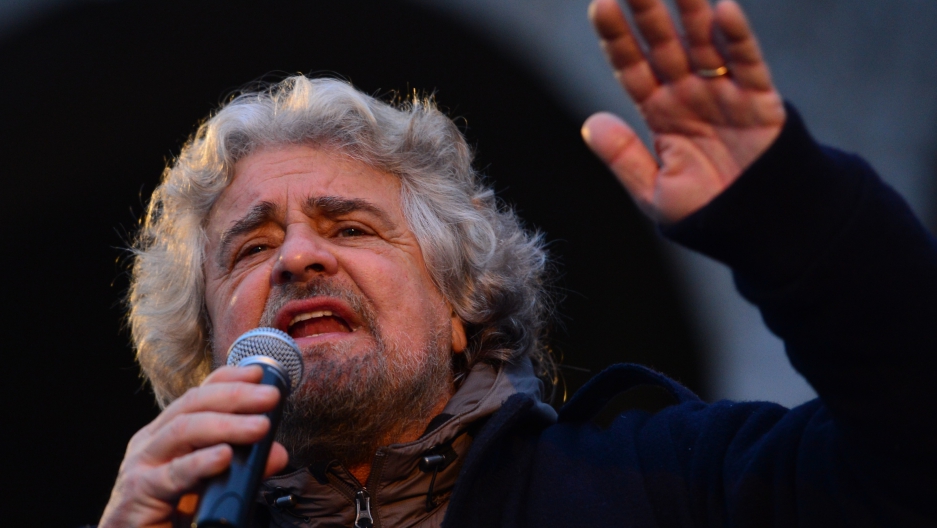 They're plastered on buses, billboards, even the Segways that bear footsore tourists through ancient cobbled streets, with messages from a seemingly baffling array of 25 parties and coalitions — from the Workers' Communist Party to the neo-Fascist Tricolor Flame — competing in parliamentary elections on Sunday and Monday.

Although actually a relatively simple contest, the elections could have a profound impact on the future of Italy and the entire euro zone.

The results will determine whether Italy maintains its policies of fiscal restraint and economic liberalization that have restored its credibility on financial markets over the past year, or if voter anger with austerity will usher in a government that would spend its way out of recession at the risk of clashing with Italy's euro zone partners, especially Germany.

Only two coalitions are likely to emerge on top.

On the center-left is a grouping headed by Democratic Party leader Pier Luigi Bersani, 61, a former Communist who moved to the political center to become a liberalizing economics minister in the mid-2000s.

Despite pressure from the left, Bersani is seen broadly continuing the reform process launched by Prime Minister Mario Monti, the economist who has led a technocratic government for the past 15 months.

Bersani talks about "correcting" rather than overhauling some of the austerity measures and has pledged that Italy will meet its commitments to its European partners.

His approach, and down-to-earth style, draw comparisons to French President Francois Hollande’s. Bersani’s victory would add to pressure from France on German Chancellor Angela Merkel to tone down Europe-wide austerity.

Merkel may still prefer that to the alternative, however. Challenging Bersani is the familiar figure of Silvio Berlusconi, the three-time prime minister and dominant force in Italian politics over the past 20 years.

Berlusconi, 76, has made attacks on Monti and Merkel a central thrust of a campaign packed with promises to end austerity and reignite growth.

On Monday, he mocked the German leader's commitment to budgetary rigor as a result of her upbringing in Communist East Germany. "She was born in East Germany and was trained as bureaucrat of a centralized economy," he told business leaders in the northern city of Monza.

Many had written off the media mogul after he was forced from office in November 2011 with Italy's finances in free-fall and his business and sexual practices under intense scrutiny from prosecutors.

However, the billionaire has few rivals on the stump. Since returning to the political fray in December, Berlusconi's pugnacious TV and rally performances have galvanized support for his conservative People of Freedom Party (PDL).

Bersani's coalition still has about 34 percent of the vote, about 5 points more than Berlusconi's, according to polls carried out before a ban on opinion surveys took effect two weeks before the elections.

A centrist list supporting Monti is expected to poll around 15 percent.

A similar score is predicted for a bushy haired, anti-establishment comedian named Beppe Grillo, who promises a guaranteed basic income for all citizens, investment in health, education and small business and the abolition of unpopular taxes.

While Grillo rules out deals with other parties, Monti could become kingmaker.

Conventional wisdom points to his forming a coalition with Bersani, with the outgoing premier taking on a senior economic role in a government led by the Democratic Party leader.

That outcome would be welcomed by the financial markets and officials in Brussels and Berlin, who are fearful both of a Berlusconi comeback and an outright Democratic Party victory that could see policy swing leftward.

However, Monti has recently expressed unease with the more radical elements backing Bersani and has hinted he could also strike a deal with the right — but only if it ditches Berlusconi.

"We can suppose perhaps that the PDL won't always be led by the honorable Mr. Berlusconi," Monti told Radio Uno. "You could imagine a form of collaboration, if it's been changed and cleared of that blockage that by its very nature prevents reform."

More from GlobalPost: Can the Catholic Church outgrow the pope’s antediluvian philosophy?

Italy's complex electoral law could give Bersani's center-left a majority in the lower house of parliament even with less than 50 percent of the vote. In the Senate, the outcome will depend on regional votes, with close races in big northern regions of Lombardy and Veneto likely to be decisive.

With less than a week until the elections, the greatest fear for many Italians is that they will produce either no clear winner or a coalition of several squabbling factions that would prevent implementing a coherent program to pull the country out of a recession that saw the economy shrink by more than 2 percent last year.