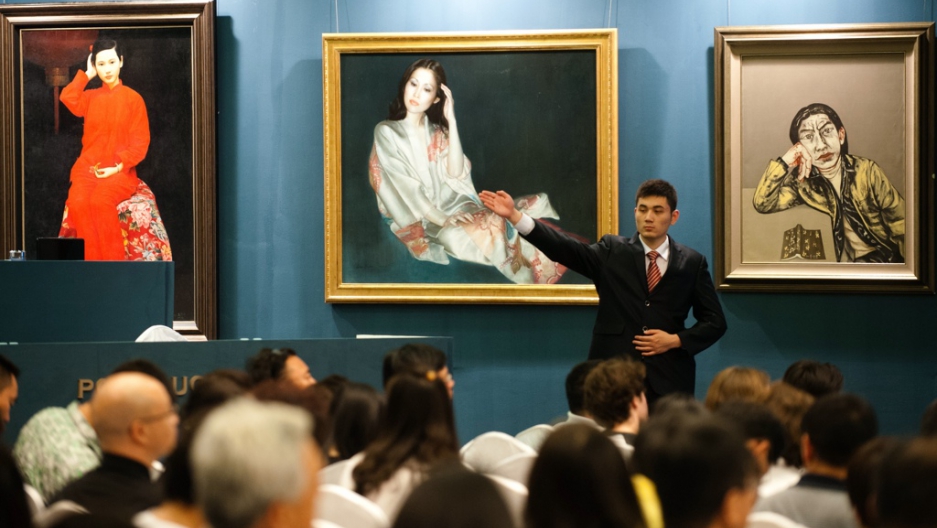 TAIPEI, Taiwan — In Huang Hung-jen’s plush office in old-money West Taipei, there hangs a 6-foot oil painting of US Marines manhandling an Iraqi family in their own home. The Iraqis look petrified, the Marines aggressive and overbearing.

The piece, part of up-and-coming Chinese artist Yuan Liang-yu’s "War Series," is a blunt metaphor for how China believes the human rights narrative is skewed in Washington's favor. It's also an example of how Beijing uses the arts to engender soft power at home and abroad.

It goes without saying that Yuan wouldn’t be permitted the same artistic license were he protesting trouble spots closer to home, say in Tibet or riotous Xinjiang.

But Huang, a Chinese art insider, doesn’t care about that. What he cares about is securing pieces for Beijing Poly International Auction Company, the fine arts arm of a powerful and opaque mainland Chinese business conglomerate.

The auction house has rung up mega-deals such as the 293.25-million-yuan ($49.24 million) record set for Li Keran’s "Landscape in Red or Million Red Mountains" at June’s spring show in the Forbidden City. Most of Li’s work celebrates Mao Zedong, and this 1964 piece is no different, inspired by the chairman’s poem "Qin-Yuan-Chun Changsha."

According to Huang, an anonymous Beijing buyer purchased the painting from a Taiwanese collector, who was keen on profiting from China’s exploding fine arts market and auction business.

It’s a business that is largely driven by sales of state-approved pieces. And Poly Auction, which is ostensibly controlled by the People’s Liberation Army (PLA), is the general at the vanguard of the action in the booming arts market. It's also a company that is a weather vane for the powerful vested interests that dominate China's booming, and largely state-run economy.

Poly has already become the world’s third-largest auction house since opening its doors in 2005. Christie’s and Sotheby’s, the No. 1 and No. 2 houses respectively, took centuries to rise to the top by relying on a global network of auctions to drive sales.

Poly doesn’t need to scour the globe for buyers because it has more than enough of them at home. According to industry market research outfit Artprice, China overtook both the US and the UK as the world’s largest fine art market, with $4.79 billion in sales in 2011.

“It’s exploding because the Chinese have a lot of money and they want to invest. Global stocks are down and art is the hot new investment,” said Huang, who had racked up a decade’s worth of experience in Taiwanese auction houses before he was handpicked by Poly to set up the Taipei office.

Huang also says the need for cash-rich Chinese to hide earlier, and shadier, “investments” is a major driver of art purchases across the Taiwan Strait. “As China beefs up tracking of bribery, taxes and financial crimes, the Chinese buy fewer houses, cars and jewelry and prefer to pump that money into art. It’s very smart.”

The Beijing-based company has a virtual monopoly in China because foreign houses such as Christie’s and Sotheby’s have only recently been permitted to hold auctions in the country, leaving Poly to dominate smaller local firms.

“If you need to sell an important Chinese vase or painting, then you get a better price discovery at Poly than you get at Christie’s. But you have to remember that a lot of the buying [in China] is artificial,” said Sergey Skaterschikov, founder of Skate’s Art Market Research.

“They’ve set up a fully private museum, which is the equivalent of setting up a captive institutional buyer with very little transparency. In the auction business they call it show bidding,” he added. “Their own captive demand is always available to drive the prices and the volume.”

Show bidding or not, Poly has other ideas about how it has grown to challenge the Western auction houses' hegemony. According to the company website, “The rapid growth of Poly Auction [has] no doubt benefited from the solid foundation and strong support from Poly Group ... [and the] kind solicitudes from leaders of the country and the Party.”

The company’s “P” logo, the website says, is derived from the first letter of the People’s Liberation Army and is shaped like a fist to represent “confidence and power.”

He says Beijing’s soft power art push is “priority No. 1 for decisions like setting up an office in New York. It’s more important than tapping into the US market, and is clearly their mandate. They make no secret of it.”

It’s fitting that such an opaque enterprise is controlled by a highly complex state business empire known for its secrecy and connections to the military, the Communist Party, and “princelings” — the scions of Party heavyweights, reviled as much for their power as the rampant corruption they are routinely accused of partaking in.

“China’s cultural plan is very smart. By encouraging foreigners to appreciate Chinese culture, language and literature, it is producing more foreigners to be sympathetic and supportive of China,” said Lo Shiu Hing, a Greater China political expert at the Hong Kong Institute of Education.

He says China’s auction house is similar to the cultural arm of the Confucius Institute, an organization run and funded by Beijing that has centers around the world devoted to teaching Chinese language and culture.

“Art is more passive, whereas the Confucius Institute is a more active arm of the Chinese government. But both are cultural arms of Chinese foreign policy.”

The institute is not all that unusual, and one could look at the UK’s British Council or Germany’s Goethe-Institute for comparison.

However, critics of Confucius Institutes say they are cultural Trojan Horses, designed to enable a foothold for the Chinese government in Western universities, push China's “soft power” narrative, and gloss over the harsher realities of political and civil life in the Middle Kingdom.

For Poly, its push beyond its borders is a marked shift in direction for an outfit that started life with a mandate to acquire mostly Ming and Qing Dynasty pieces from overseas collectors. Observers say that mandate was designed to stoke nationalist sentiment at home of a rising China reacquiring works that Beijing says were often looted through foreign aggression.

However, savvy businessmen soon realized that auction purchases — and later donations to the state — of prized Chinese artwork were a great way to curry favor with Beijing.

In 2007, Macau gambling tycoon Stanley Ho paid about $8.9 million for a Qing Dynasty bronze, which he later donated to Poly’s private museum in the Chinese capital. Ho had seen Beijing end his virtual monopoly over gambling in the former Portuguese colony a few years earlier. By 2007, US-based casino operator Las Vegas Sands Corporation had opened its second casino on the new strip. The $2.4 billion Venetian, the world’s largest casino, could have spelled the end for the 90-year-old billionaire.

However, insiders say Ho, an open polygamist who allegedly retains strong ties to Chinese organized crime, was soon reinstated to the good books when a few of his 17 children were awarded new casino licenses in the booming territory.

“Our CEO in Beijing says he doesn’t want to spend that kind of money because someone else will buy it and give it to us anyway. It’s a good way to get the government to look after you and allow your company to grow.”