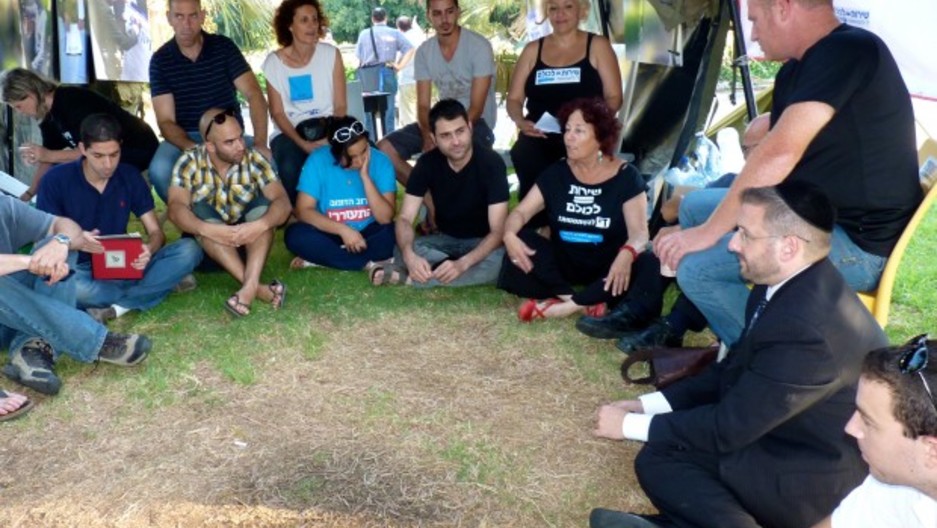 Rabbi Dov Lipman (second from right) at a demonstration in July 2012, calling for Ultra-Orthodox Jews to serve in the army. (Photo: Matthew Bell)

The first American-born emigrant elected to the Israeli parliament in a generation is in a unique position to contribute to the defining issue in Israeli politics. Dov Lipman is a 41 year-old rabbi from Silver Spring, Maryland and he is probably as surprised as anyone to be a new member of Israel's Knesset.

"Sharing the burden" is a catchphrase known by just about every Israeli since the national election last month. It refers to the fact that nearly all of the Ultra-Orthodox Jewish men in Israel — tens of thousands of them — are exempt from the military service that is mandatory for most of the rest of the country. They rely heavily on government subsidies and spend long hours in full-time religious study for much of their adulthood. Many do not enter the workforce and therefore do not pay much in the way of taxes.

The situation has caused no small amount of resentment among Israeli voters and they want it to change. So does Rabbi Lipman.

The rabbi's road to the Knesset ran through the less-then-glamorous Israeli city of Bet Shemesh. In late 2011, Bet Shemesh was a cultural battleground. It was big news when members of the Ultra-Orthodox community harassed and spit on an 8 year-old Jewish girl for not dressing modestly enough.

In Bet Shemesh, Lipman became a very public advocate against the extremism and self-imposed isolation of the Ultra-Orthodox community. And for that, he says he was spat upon, had rocks thrown at him and even received death threats. But he kept it up, calling on the Ultra-Orthodox to do more to integrate into mainstream Israeli society.

"It's mostly the political leadership of the Ultra-Orthodox community," Lipman told me last summer. "The average Ultra-Orthodox person on the ground is ready for some kind of a change."

Lipman spoke with me at a small demonstration in Tel Aviv, where a group of young army veterans in t-shirts and jeans were demanding that the Ultra-Orthodox either join the army or do some kind of national service.

The rabbi stood out in this crowd. He was the only person there whose style of dress marked him as an observant Jew. The black yarmulke on his head and his black pinstriped suit was probably similar to the outfit he wore during his time at yeshiva. Judaism puts an emphasis on learning the Old Testament — or Torah. But Lipman told me that there needs to be a better balance.

"Listen, I love studying Torah, I dedicated my life to the rabbinate," he said. But he conceded, "I couldn't sit and study Torah day and night for my entire life. It's not a normal thing."

"There's an elite group that I'm sure can do it and the country's ready to support them and support them well. We're not talking about going into the study halls and clearing them out and giving them a gun and saying, 'serve in the army.' They're talking about community service within their own communities."

That message of compromise earned Lipman a spot in a new political party led by one of Israel's rising stars, Yair Lapid. The former journalist and his Yesh Atid party — it means, 'there is a future' — made "sharing the burden" a centerpiece of their campaign. And they surprised just about everyone in the recent election by winning the second-highest number of seats in the new parliament.

At the beginning of the month, I spoke with Lipman at the Knesset. It was the day he took the oath of office. This meant he had to give up his American citizenship, which he told me was one of the hardest things he has ever had to do.

"You know America meant so much to my family, taking in my family from persecution in Russia and the Holocaust," Lipman said in the crowded entryway of the parliament building.

"America has given me so much in terms of my values of tolerance and respecting one another, I felt like I was smacking my country in the face."

But Lipman seemed giddy to be have a shot at making his mark in Israeli politics. He said he wants his work in the Knesset to be a continuation of what of he was doing as an activist in Bet Shemesh.

"What we're trying to do is create a situation where they continue religious observance as they are, but they're serving in the army, serving in national service, going to school, working," Lipman said. "It'll be a process, but as we get to that point, there will be less extremism. And events like [what] happened in Bet Shemesh will not happen again."

Lipman repeated to me his belief that many people in the Ultra-Orthodox community are ready for change. And with his religious background, he said he can be a bridge between them and the Israeli mainstream.

But this will not be easy, according to Gil Hoffman, who covers politics for the Jerusalem Post.

"It's true that there is a lot of Ultra-Orthodox grass-roots who realize that things have gotten out of hand," Hoffman said during an interview at his home in Jerusalem. "Unfortunately, it's the rabbis who make the decisions for them. And their rabbis aren't going to realize that anytime soon."

"The challenge," Hoffman said, "can't be underestimated. You're talking about changing a culture among people who are raised to be uncompromising."

Last week, Dov Lipman spoke in parliament for the first time. And he made his pitch for compromise to his Knesset colleagues.

Some 70 years ago, Lipman said his grandmother, Mrs. Ethel Kleinman, emerged from Auschwitz. And as she told him, "there were no sectarian divisions in the death camps."

"No one spoke of secular, religious, traditional or Ultra-Orthodox," Lipman said in American-accented Hebrew. And neither did the Nazis.

"As far as they were concerned, they were all Jews, subject to the same cruel fate."

Lipman went on to call on his colleagues to do the same, by breaking down the sectarian divisions in Israeli politics and society today.