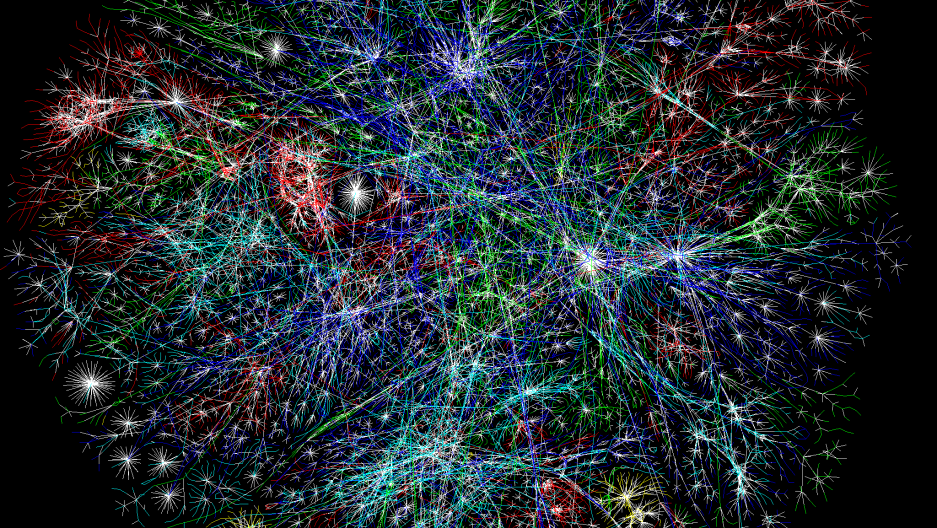 A Hungarian physicist says he has discovered that every website on the internet is connected by 19 clicks or less. Estimates say that there are about 14 billion websites and about a trillion web pages.
Credit: Opte Project
Share

A Hungarian physicist has found that every website on the internet is connected by 19 clicks or less.

Like the myth that every working actor is connected somehow to the Hollywood star Kevin Bacon by no more than six people, websites are also limited in how far they are apart.

Smithsonian reported that the findings by Albert-László Barabási were based on a computer model that mapped out 14 billion websites with about one trillion pages (see image).

Most of those pages are ill-connected according to the research.

They are, however, connected by the so-called "Kevin Bacons" - intersections or nodes like indexes that connect distant parts of the web.

More from GlobalPost: Iceland contemplates a ban on Internet pornography

Barabási also found that like the real world, the internet was organized into cliques and hierarchies by region, subject and country.

"Such networks are in effect held together by a small number of highly connected hubs," he wrote, reported the Daily Mail.

"This scale-free property is an important organizing principle for the Web."

Smithsonian said that the physicist warned that knocking out one or some of the internet's most vital nodes would cause a massive rift between sites and pose huge security risks.

The Atlantic pointed out that the research needs to be approached cautiously as the real internet was not studied but rather a model.

There is also a debate about what really constitutes a "click."

His findings were published in the journal Philosophical Transactions of the Royal Society.