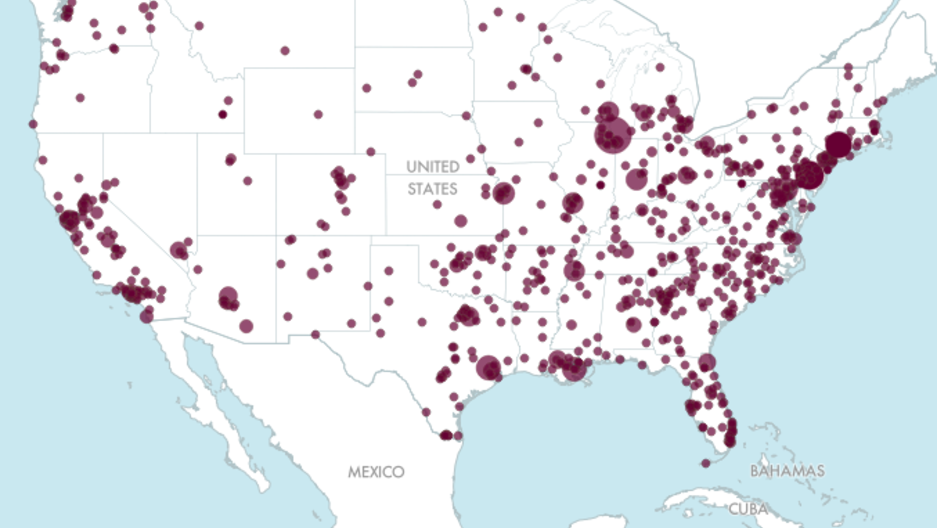 Dan Kois and Slate use the twitter feed @GunDeaths, tips from the public, and news sources to gather the information used in an interactive map. (Photo from Slate interactive)

More than 1,600 people have died from gun-related violence since last December, when a mass shooting at a Connecticut elementary school refocused public attention on the issue.

By using interactive, crowd sourced data; Slate Magazine is tracking and mapping the name, age, gender, date and location of every person who's died from gun-related violence since the Newtown shooting. They're also publishing the data via a Twitter feed, @GunDeaths.

Dan Kois, senior editor at Slate and a contributing writer to The New York Times Magazine, says the information about each death comes from tweets, tips via email, and various news sources, but they continue to need more help from the public.

Each individual story is tragic or shocking, Kois says, but the impact doesn't hit you until the deaths are assembled on the interactive on the Slate website.

Once the deaths are assembled, Kois said he feels an overwhelming sense of shock because you see gun-related deaths pile up week by week.

"A month and a half after Newtown we are now up to over 1,500 deaths from guns," he said. "An easy way to think of it is, basically every day, Newtown happens and then some."

Next to the map on Slate's website, bodies are lined up in rows representing the gender of each person killed. Each death report is accompanied by a link to an original source.

"I think that you can point to the many things standing in the way of making guns safer or making guns more difficult for dangerous people to get, or banning guns outright, depending on what you think the right solution to this problem is," he said. "But I don't think you can put that on the feet of people not caring."

By plotting where the gun-related deaths have occurred, the map makes it clear this isn't just an urban issue, or a mass shooting issue.

"If you look at the map that's associated with our interactive, you see it spreads across the nation in 49 of 50 states and there are deaths in tiny towns and all over the country that are murders, accidental deaths, or police killings of suspects using justifiable violence," he said. "But in all cases, what connects them is that guns were available and guns became part of that event and someone ended up dead as a result."

Before this project started, Kois thought someone was already tracking and publishing this information. Though the Center for Disease Control and the FBI keep track of gun-related deaths, they don't publish the stats until a year later.

"The only real source for real-time data on gun deaths is the media, so that's where all of our information is coming from," he said.