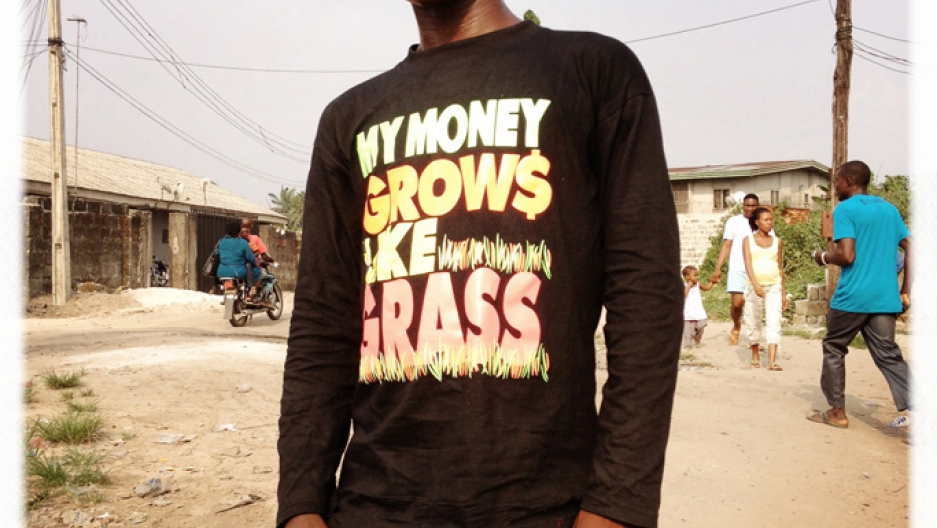 Comparing the Divide: The oil that lies underneath Big Spring, Texas, and Warri, Nigeria, creates economic distance and physical barriers between workers who extract the crude and their privileged bosses. Big Spring and Nigeria also share similar Gini coefficients — the standard measure of income inequality — of .431 (Big Spring) and .437 (Nigeria).

In a casual display of excess, gallons of the delta’s “light and sweet” crude — possibly the most valuable commodity on the planet — are dumped daily into the open gutters to suffocate the mosquitoes breeding in the stagnant water.

Starting in 2009, when the government enacted an amnesty program that saw several thousand Delta fighters exchange weapons for cash, followed by the election of President Goodluck Jonathan, a native of the Niger Delta, there has been an overall effort to redirect oil wealth back to the communities that host Africa’s largest oil industry. Since then, a small, emerging segment of the population — primarily politicians and former militants with access to government contracts and revenues — has grown spectacularly wealthy and powerful, while most Nigerians remain poor and beholden to the generosity of the elite.

In communities like Ubeji, a neighborhood in Warri, wealth from oil rents fuels the construction of mansions at a furious pace, bypassing the building of roads and other public infrastructure, like water and electricity. As a result, there is no urban plan. Bumpy dirt paths weave through a random scattering of lots featuring custom metal gates, electric security fences, private water towers, industrial-sized generators and paved driveways. Black luxury cars with dark tinted windows slink through the jungle maze and disappear into fortresses.

“The government doesn’t provide anything,” explained Moses Okotie, a resident of Ubeji who works for a local oil company operating between Warri and the nearby Escravos terminal – Chevron’s largest oil tank firm in the country, one of the largest oil producers in the world. “So we have build it ourselves. We are the government here.”

Every morning, throngs of people gather outside the steel gates of these homes to wait for a possible meeting with the community’s “chairmen,” oil barons who sit atop vast hierarchies upon which thousands of people depend, both formally and informally, for a lifeline. Their “boys” man the entrances, dressed in high fashion purchased on recent trips to London, Paris and New York City. Many of the new oil rich here own second homes in Texas, close to expat American oil workers who work on their land.

“The people who are here are really trying,” explained another woman lingering at the gate, seeking support for a talent show for disadvantaged youth in Warri. “I’m happy with anyone opportune to penetrate the oil industry here. These are the people that allow our community to eat.”

Along with increasing the numbers of mansions, the rise of wealth has increased investments in malls, movie theaters, hotels and mega churches throughout oil boomtowns such as Warri and nearby Port Harcourt. Luxury hotels such as the Protea Ekpan in Warri cater to the Nigerian and expat oil and gas elite and to Nigerian politicians with rooms priced between $400-600 per night.

In the evenings, politicians in flowing gowns file into the marble lobby flanked with armed military escorts, rifles double- and triple-clipped with duct tape – protection against the constant threat of kidnapping and armed robbery, the Delta’s other booming commercial industries. In the hotel’s gourmet restaurant, oil company workers hold muffled conversations with security consultants over champagne and fresh fruit.

“We call it padi-padi politics,” explained Ramzen Edema, while waiting on his boss — a local chief and pipeline contractor — to finish a meeting with an oil company representative at the Protea Ekpan bar, “you have to know someone to get something.”

“That’s why I am here,” he said. “Education doesn’t mean anything in this country, what’s necessary is loyalty to your chairman. You just do what he says. You don’t think, you don’t argue, you follow the leader.”

And while the interior atmosphere matches that of any five-star hotel globally, its back view abuts a smoky, grey expanse of rusting refineries and constantly burning gas flares. Just outside the gates — along a road lined by the head offices for Chevron, Texaco, Shell and the residential camps of their employees — homeless vagrants live in smoldering refuse dumps between the express lanes. Polio victims crawl on their hands and knees begging for stray bills from cars leaving the garrisoned compounds.

The source of this wealth is not far away. The intricate waterways surrounding Warri contain some of the world’s largest deposits of light sweet crude — easily refined and therefore highly sought on the global market.

On Warri’s swampy fringes, where new developments sit atop freshly cleared mangroves and dark mud soaked with crude oil, massive tank firms store petroleum products shipped in from the nearby creeks. The firms are owned by the new elites based in the city. Surrounding the tank firms, seagoing vessels line the waterways, waiting to load millions of barrels of raw crude oil before setting forth across the Atlantic. Hundreds of rusty oil tanker trucks line the roads to transport diesel, petrol and kerosene to filling stations across the nation.

Despite being Africa’s largest oil producing region and the fifth largest supplier of crude oil to the United States, fuel for daily use is among Nigeria’s scarcest and most expensive commodities. Due to constant power outages, Nigerians who can afford them rely on privately-owned generators for electricity. The poor live in darkness.

Oil provides roughly 87 percent of government revenues, 90 percent of foreign exchange earnings, 96 percent of export revenues, and almost half of Gross Domestic Product (GDP). However, despite the fact that the Nigerian exchequer takes in more than $50 billion from oil annually, more than 90 percent of Nigerians live on less than $2 a day and 70 percent live on less than $1 a day. In the Niger Delta, youth unemployment is at 40 percent. Hovering at the fringes of the oil industry are those cut out from the extreme wealth that flows to the politicians and those with connections to them.

In the evenings, tanker drivers park their vehicles in line at the tank firms and bathe in nearby ponds coated with the sheen of diesel fuel. Weaving in and out of the waiting trucks are school-age children, hawking goods like satchel water and spiced meat to help support their families and themselves.

Godwin, a 15-year-old boy who lives with his uncle in a nearby village, works there every day after school. He sells meat pies from 3 p.m. until everything is sold, usually around 10 p.m., leaving little time for homework. His uncle forces him to work in order to pay for his school fees.

“If I don’t work, I don’t go to school,” he explained, straining his neck to keep the heavy load balanced on his head. “I just pray someone can help me to further myself, but I don't have any connection.”

In Nigeria, where unregulated corruption has concentrated extreme oil wealth into the hands of a small group of elites, while systematically denying most of the population access to even the most basic amenities, a great many rely on individuals to fill the safety net where the state has failed. Those without connections to the wealth flowing through the center live a precarious and unrelenting day-to-day struggle for survival.

Tucked away throughout back corners of Warri’s new developments are hordes of migrant laborers who have set up nomadic camps in the shells of the half-finished concrete mansions. Most of these young men migrated from Niger within the past two years, fleeing drought.

Every morning, they gather at nearby bus stops or construction sites for builders to contract them. Someone walking into these areas can be immediately surrounded by hundreds of desperate faces selling their labor for less than $10 a day.

In the evening, after work, they quietly pack away to the unfinished buildings; setting up outdoor campfires where they boil rice in carefully rationed communal vats. A twenty-room unfinished mansion can house up to 100 workers for the night. They sleep scattered on mats, exposed night after night to the ferocious onslaught of the delta’s mosquitoes.

“In our place, the grass doesn't grow,” explained Kadir Abdul, an 18-year-old from Niger with intricate Fulani tribal marking carved into his face and dressed in tattered rags, “so we had to come to this side, where there is work.”

Illegal and looked down upon by Nigerians, who call them “boko,” they are the people helping to build the labor-intensive mansions, doing the most menial jobs of clearing the jungle brush, digging holes in the sandy dirt, laying stone, dredging the swamps.

Abdul arrived in Warri about eight months ago, traveling by foot over the porous border in northern Nigeria and then taking the 20-hour bus ride down to the delta from Kano. For the past month, he has been working seven days a week, clearing out a plot of land owned by one of the most powerful businessmen and community leaders in the Niger Delta.

With a rented pick axe, shovel and wheelbarrow, Abdul and four others dig away at a strip of overgrown earth next to one of Shell’s high-pressure pipelines—which cuts through the community and is used by locals to burn their refuse and by nomadic herders from Niger to graze their cattle.

They are making way for the expansion of the estate — a dozen acre fortress complete with a pool, a separate entertainment center, 15 cars, a driving range, and a private zoo of ostriches, peacocks, and gazelles. This latest addition will serve to house a formidable security detail manning the gilded, 12-foot high entrance to the grounds, a quarter of a mile from the current gate.

“There is trouble in this country,” explained a private security consultant who is overseeing the construction. “And this town is very volatile, we have many armed robbers, thieves, kidnappers… They are brutal. They can do anything to penetrate the gates, that is why we need to build them higher and higher.”

Nevertheless, it is where people will wait, farther down the road, for a chance to see the “chairman” — and possibly find a lifeline.