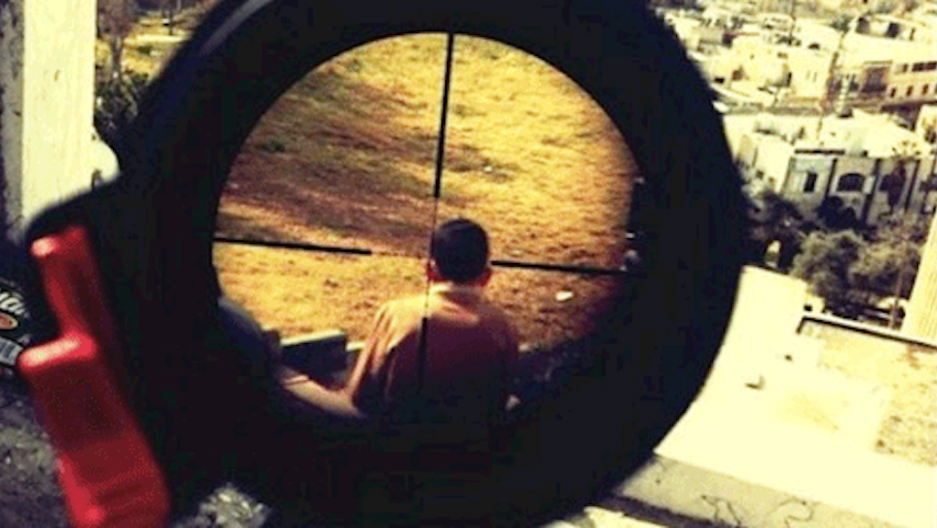 A screengrab a photo that appears to show a Palestinian boy in the crosshairs of a sniper's rifle, reportedly taken by Israeli Defense Forces soldier Mor Ostrovski, who claims he found the photo on the internet.
Credit: Screengrab
Share

JERUSALEM — An Israeli soldier provoked public outcry after he reportedly posted an Instagram photo that appears to show a Palestinian boy in the crosshairs of a rifle.

A spokesperson for the Israeli Defense Forces told GlobalPost that Mor Ostrovski, 20, an Israeli soldier in a sniper unit, said he did not take the original picture, that he found it on the internet.

"This is part of the brave new world in which young soldiers who have no memory of a world before social media hold in their hands major responsibility for the lives of people — including their privacy," Tarnopolsky said. "The reaction is significant and the punishment is serious."

Tarnopolsky said it is at least the third time in the past year that soldiers have been disciplined for this type of acting out.

"The IDF is at some point going to have to ask itself some serious questions about the use and abuse of social media — and about what is appropriate and not," Tarnopolsky said. "The messages have been pretty confused for now."

A soldier at the Army spokesman's office who in his professional capacity posted a blood-red image of the face of Ahmad Jabari, the Hamas strongman whose killing launched the Gaza operation, above the word “ELIMINATED,” for instance, was in no way reprimanded.

Speaking with GlobalPost, Yigal Palmor, the foreign ministry spokesman, referred to that action as "a stupid thing, completely childish, not illegal but totally infantile."

Israeli military said it was investigating the incident. Ostrovski's actions "are not in accordance with the spirit of the IDF (Israel Defense Forces) or its values" a spokesperson said.

Breaking the Silence, a group of IDF combat veterans who raise awareness about life in the territories, condemned the photo on their Facebook page.

"This is what occupation looks like," the nonprofit advocacy group said.

The group also published a similar photograph, taken in 2003, of a soldier aiming a weapon at what appears to be a young man.

"There, too, an Israeli soldier aimed a weapon at a boy and took a picture with his camera as a memento, a gesture of an endless feeling of power that is connected to control over another people," read Breaking the Silence's Facebook page, according to Haaretz.

In December, the Electronic Intifada discovered and posted a photo taken by a 22-year-old Israeli soldier in the Beit-El settlement. In one photo, Nisim Asis is shown licking a red substance (likely ketchup) from a knife. The caption reads: "F*ck all Arabs their blood is tasty."

The Guardian points out that an infantry corps soldier was recently sentenced to 14 days in military prison for a Facebook photo that showed the soldier next to a handcuffed and blindfolded Palestinian.

Ostrovski will likely be punished, but how remains uncertain.

[View the story "Reactions to the disturbing photo" on Storify]