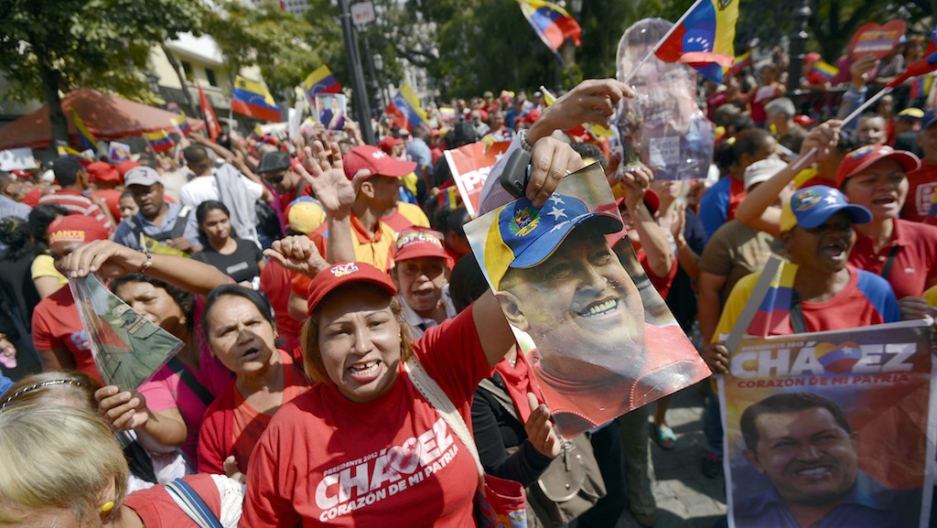 Outside, jubilant red-clad supporters dance and sing in the street.

Inside is their ailing 58-year-old leader, who flew back to Venezuela early Monday after a two-month absence, according to triumphant yet tight-lipped authorities here.

Scenes of jubilation repeated through plazas across the country.

The news was announced first by Chavez’s information minister on state television — and then in the form of a tweet on Chavez’s widely followed Twitter handle.

“We’ve returned to the Venezuelan fatherland. Thank you, my God! Thank you, my beloved people! We will continue the treatment here," read the tweet, the account’s first since Nov. 1.

Another tweet added thanks to Chavez’s idols of the Cuban Revolution, Fidel and Raul Castro, and to the Venezuelan people. "Onwards to victory forever! We will live and we will conquer!"

But how well Chavez will be able to govern onward is unclear. He’s had to breathe through a tracheal tube, his government said Friday, which makes it difficult for the notoriously long-winded leader to speak. Fueling a heady mix of emotions here, Chavez’s return leaves Venezuelans wondering what’s next.

Chavez surprised the world when, on Dec. 10, he left for Havana for another surgery on his recurrent cancer. That was about two months after Chavez had handily won re-election, claiming on the campaign trail that he was healthy and cancer free. The six-hour operation led to numerous complications, authorities said.

Chavez has not been seen or heard in public since leaving for Cuba. On Friday, amid calls for proof of life of the “Comandante,” authorities released photos they said were the first postoperative images of the president. The four images of Chavez grinning in a hospital bed, flanked by his two daughters and reading a Cuban newspaper, fueled his supporters' hopes but also agitated his opponents.

Information Minister Ernesto Villegas, whose unrevealing communiques about the president’s health have formed a somber backdrop to the last couple of months here, even sang live on television: "He's back! He's back!"

Crowds repeated the chant outside the military hospital in Caracas’ rough San Martin district, and revelers painted the slogan on passing buses.

Campoverde Bolivar, 66, stood outside the hospital gates with a tray filled with flowers, images of Chavez and a doll representing Jesus. “He’s a great man for all of humanity,” he said of the self-styled socialist president. “He’s a miracle worker; whatever we ask, he does it.”

Indeed, Chavez is revered by much of the country’s poor, though its opposition is not yet satisfied.

“This isn’t enough,” 25-year-old Alexa Hauber said of the announcement the ailing president had returned. “We’re talking about the president of our country.”

Hauber and dozens others protested over the weekend outside Caracas’ Cuban Embassy. They said they’d begun to suspect Cuba might be holding the reins in Venezuela.

Now Hauber says she wants to see the president evaluated by a medical committee in order to confirm whether or not he is able to govern the country. “I’m certain this won’t happen,” she added.

The opposition has been relatively quiet. Henrique Capriles Radonski, the politician who lost to Chavez in October’s presidential election, tweeted: “Welcome back to Venezuela. I hope that your return generates some sanity in your government.”

Indeed, the government has often seemed to contradict itself in public pronouncements about Chavez. Insisting he was governing from his Havana hospital bed, authorities were caught short when an official revealed on Friday the president was unable to speak thanks to a breathing tube.

Having missed his Jan. 10 inauguration, some Venezuelans are calling for Chavez to be sworn in from the hospital. There are also expectations that he may declare his presidency over and pass the baton.

“Chavismo needs Chavez to reinforce the emotional link with the people after two months away,” said Leon, the pollster. “The [recent] pictures and [now] his presence in Venezuela create new excitement around him and this could help his endorsement of Maduro.”

Maduro, Chavez’s chosen successor, confirmed Chavez landed at 2:30 a.m. in Caracas, though no images have been released.

The news may not allay fears among the opposition that the Cubans are somehow pulling the strings in this South American oil-exporting country.

“The capital of Venezuela has moved to Havana,” said prominent opposition figure Leopoldo Lopez last month. Close relations between the Castros in Cuba and Chavez’s inner circle, notably Maduro, have worried the opposition here that Venezuela will one day turn into the tightly controlled Communist island.

In a public letter published by Cuban authorities on Monday, Fidel Castro said he was pleased Chavez had been able to return to the “land you love so much.”

"You have learned a lot about life, Hugo, in those tough days of suffering and sacrifice,” Castro wrote.

Whatever Chavez does next will be closely watched by all in Venezuela, and observers and investors around the world, keeping a close eye on the world’s largest oil reserves. Some have sought to convey Latin American leftist populism as a dying breed, along with the Castros and Chavez himself.

The victory of President Rafael Correa in Ecuador's election on Sunday, however, proves it’s not dead yet. Correa dedicated his win to Chavez.

“Get better as soon as possible,” Correa said. “Venezuela, his beloved Latin America, and his friends — we all need him."