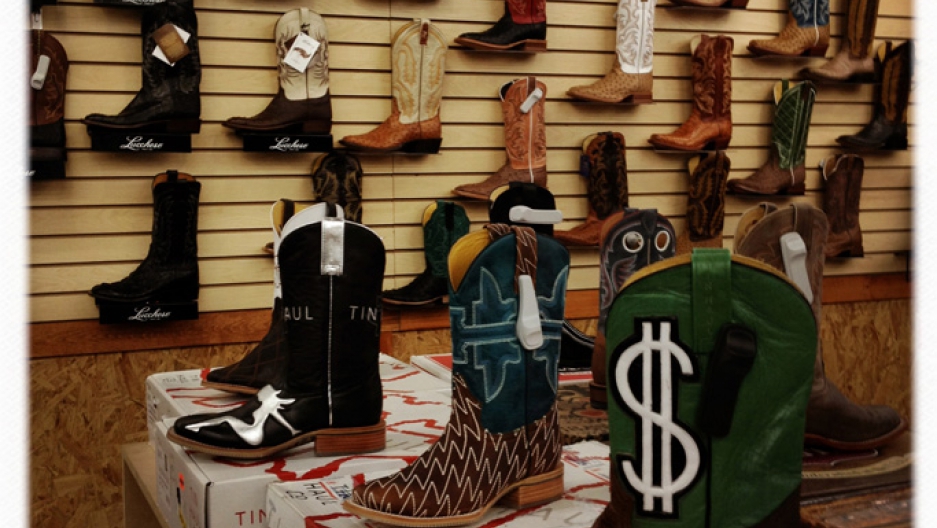 Custom-designed cowboy boots made with alligator and ostrich leather, retailing between $400-500, on sale in a boot store in Midland, Texas. An oil boom in the Permian Basin has turned Midland into the second wealthiest metropolitan area in the nation, based on personal incomes.
Credit: Samuel James
Share

Comparing the Divide: The oil that lies underneath Big Spring, Texas, and Warri, Nigeria, creates economic distance and physical barriers between workers who extract the crude and their privileged bosses. Big Spring and Nigeria also share similar Gini coefficients — the standard measure of income inequality — of .431 (Big Spring) and .437 (Nigeria).

BIG SPRING, Texas — Well before dawn every morning, Joey Goodwin drives through the worn streets of town picking up his crew of roughnecks — oil drilling rig laborers — before heading to work in the oil fields of the Permian Basin. As his rusty Acura bellows across a dark expanse of cotton fields, hundreds of oil rigs illuminate the horizon.

Still dark in the west Texas winter chill, they climb up the rig where they work. Their job for the next ten hours is to jam 50-foot steel pipes into the earth — one after another after another — until they strike oil, preparing the hole for “fracking,” a hydraulic fracturing drilling process. The rig is loud, slippery and dangerous. The stench of toxic hydrogen sulfide gas hangs over the fields.

“You earn a good living, enough to support a family… be a man… but it sure is hard on your body,” said Goodwin, 38. “I’ve broken my back, my neck, never really got either fixed. By now, I’m a pretty much just worn-out chunk of meat.”

Forty-five minutes west of Big Spring is Midland, a city of 120,000, which serves as the region’s financial epicenter and the home base of most of the companies that employ men like Goodwin. As high oil prices and “fracking” have ushered in a major boom in the Basin, Midland has emerged as the epicenter for this new wealth. Here, money and oil flow freely.

In the downtown district of Midland, buildings erected during the last boom cycle are being torn down and replaced by sparkling glass office towers. Midland’s BMW car dealership of the Permian Basin reported a significant increase in the number of sales, even above last year’s, particularly for the 760Li model, priced at $155,000.

As Wes Reeves, a 28-year-old partner in the newly formed Hannathon Petroleum Company, said the boom has attracted some greedy and irresponsible behavior but acknowledged, “In this country, oil is God.”

The economy of the Permian Basin, which accounts for 14 percent of the nation’s oil production, is fractured like the earth beneath the drills. It’s a place of extreme wealth and enticing opportunity for roughnecks like Goodwin who risk their lives and their health. Those on the lowest rungs struggle day-to-day and are increasingly priced out of affordable housing as prices rise amid the oil boom.

Most of the roughnecks in Big Spring are like Goodwin, who dropped out of school in the 7th grade and has served some time in prison. Working in oil fields since his early teen years, he has been in Big Spring for two years. His leathered skin and calloused hands speak to a lifetime of hard labor.

Goodwin, originally from southern Louisiana, is one of thousands of men currently flooding into this part of west Texas, where a boom caused by the high global price of oil and new drilling technology is providing high wages — up to $25 an hour — for those willing to endure the backbreaking labor. In a crossroads like Big Spring, the budget hotels and motels are constantly full as workers pulling 24-hour rotational shifts on the rigs file in and out from the fields.

While he earns a good wage, the cost of living has also been driven up steeply by the oil boom, especially the high demand for housing in a market with a shortage in supply. Goodwin, carrying rental and child support payments, is making just enough to get by.

“We’re the trash out here,” he said, gazing out from the rig over a dawning horizon, “and a lot of people are making a lot of money off our backs. But I can't complain, work is work.”

Midland’s Texland Estates, a gated congregation of million-dollar homes, brims with green manicured lawns and sparkling fountains. Several mammoth structures are in the process of being erected, in stark contrast to the surrounding desert landscape of brown scrub littered with thousands of teetering oil jack pumps.

“The land here isn’t very pretty,” says resident Kristina Johnson, gazing from her half-finished balcony over the estate’s security walls, “but what I love about design is that you can create your own oasis anywhere you are.”

Johnson, a Texas A&M-educated architect who specializes in high-end, custom-built homes, designed many of the mansions in Texland. “This boom is a blessing, but it’s also overwhelming. At a certain point, I just had to stop taking commissions. It was too much. Last year I had a three-year wait list, just in Midland.”

Midland ranked as the second-wealthiest metropolitan area in the nation in per capita personal income in 2011. It has less than a four percent unemployment rate, well below the US national average of 7.8 percent.

The only obstacle to building in Midland, Johnson said, was the labor workforce’s struggle to keep up with the increasing demand of the housing market. “For a while there were so many people wanting homes, and simply not enough labor to actually build them.”

Married to a petroleum engineer, Johnson is currently building her own home in Texland as a final project before taking time off to raise her two young children. The house is more than 12,000 square feet, complete with a 100-foot long indoor archery range in the basement. She designed the entire upstairs of the home for her daughters — an exact replica of the more modest home where she herself grew up.

While the current oil boom has substantially increased incomes for petroleum executives and engineers, it has been a different story for those at the city’s margins, particularly in the service industries. The influx of workers means the cost of housing and living have skyrocketed even more dramatically in Midland than in Big Spring. Many have been forced out of the city, and even out of the Permian Basin, in search of more affordable housing.

The crews of plumbers, stone layers, and insulators working on the million-dollar homes cannot afford to live in Midland. Instead, they commute two hours each way from Lubbock, 117 miles north, where housing is comparatively more affordable.

One 29-year-old worker on Johnson’s site, Daniel Salaz, earns $10 an hour as a plumber. He explained that the past year has provided a constant stream of new homes to work on, but he still struggles to pay the monthly rent and utilities on the four-room flat in Lubbock he shares with his mother, her boyfriend and four other siblings.

His room in Lubbock has holes in the walls and lacks heating and insulation. In the winter months, he and his siblings sleep huddled around a single space heater in a cramped living room.

He shares the family’s living costs with his mother, who works as a waitress at a local Denny’s — for $2.13 an hour plus tips — and her boyfriend, who has struggled to maintain a job since being released from prison.

“It takes the three of us just to survive day-to-day,” explained his mother, Kristine Ramos Salaz. “Since the recession kicked in, I don't get tips like I used to. And the little I make usually gets spent that day. Whenever a paycheck comes in, we pay a bill. We’re not saving anything, we’re living day-to-day, literally.”

The Salaz family used to live in Midland, but a home comparable to what they have now would cost double, if not triple, what they are paying Lubbock.

Korinna Lillis, a case manager at the Helping Hands Center of Midland, explained that the organization has seen a dramatic increase in the number of people rendered homeless since the oil boom. “People are coming here from all over to work, but they simply can’t afford to live here.” For families who cannot double and triple up in the tiny flats surrounding the city, the oil boom is literally forcing them into the street.

Oil companies are purchasing the few affordable apartment buildings that exist. Concho Resources, an oil and natural gas company with offices in downtown Midland, recently bought the nearby Ocotillo complex and is converting the 38-unit, 18,000-square-foot, low-income housing complex into executive suite apartments for company employees. Residents who had lived there on a month-to-month basis have been left looking for housing, many not knowing where they will go next.

One Ocotillo resident, who works for $10.50 an hour as a server in a private club for second- and third-generation oil families, depended on the $500 monthly rent she was paying at Ocotillo. When Concho purchased the complex in November 2012, she was forced to get a second job to pay for a more expensive apartment — $750 a month — on the south side of Midland, literally the other side of the tracks, crammed between a decrepit halfway house for convicted felons and a trash strewn abandoned lot.

In Ocotillo, she could walk to work. The move also forced her to buy a used car — purchased with the generosity of some individual members of the private club — because Midland and the surrounding areas have no public transportation.

Yet most residents at Ocotillo are not so fortunate. With eviction looming around the corner, many are likely to join Midland’s soaring homeless population.

Although she considers herself lucky to even have found her new apartment, moving back to the city’s poverty-stricken south side provides constant reminders of a life she worked hard to escape.

“I feel highly blessed to have found this home,” she said. “It’s a new beginning for me and I’m going to make it beautiful on the inside. But once you step out that door, it’s hard not to feel that depression set in.”

While wealthy Midlanders bunker themselves away in gated oases, the south side remains exposed to the Permian Basin’s harsh and unforgiving desert. Stray dogs and roving addicts roam dusty back pathways, overgrown with cactus. The breeze carries traces of the H2S gas from nearby deposits in the surrounding oil fields. The bungalows are boarded up, and the fences are falling apart.

“Sometimes I wonder what they are trying to keep out over there,” said one south side resident and single mother of four who cleans homes in the wealthy estates cropping up throughout the city.