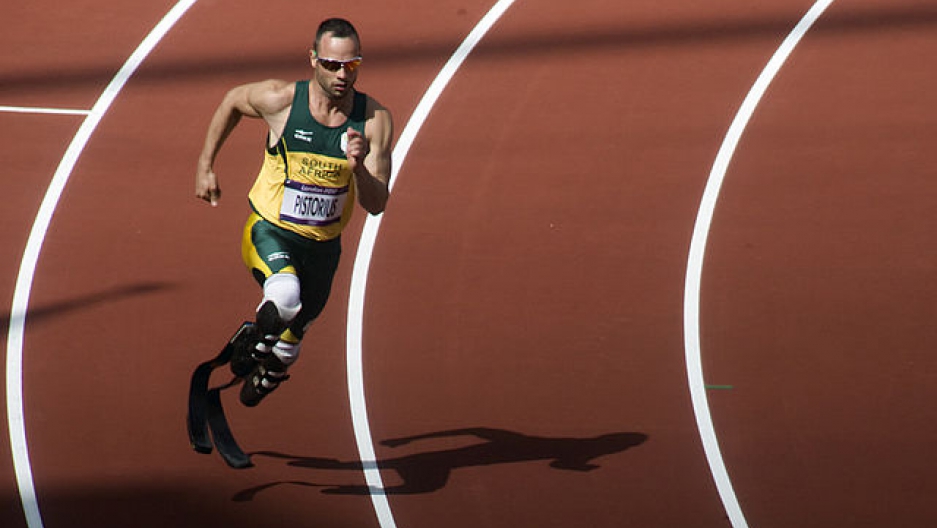 Oscar Pistorius runs in the first round of the 400m race at the London 2012 Olympic Games. (Photo by Jim Thurston via Wikimedia Commons.)

South African Olympic runner and double amputee Oscar Pistorius, was charged Thursday in connection with the murder of his girlfriend, 30-year-old modelReeva Steenkamp.

Police responded to reports of gunfire in the gated complex where Pistorius lives. When police arrived, they found paramedics with Steenkamp, who had suffered multiple gunshot wounds from a pistol found at the scene.

Lydia Polgreen, Johannesburg bureau chief for The New York Times, says the news has shocked people in South Africa because Pistorius has become a hero for people with disabilities.

"(Pistorius) was born without fibulas, had his legs amputated and went on to become a world class runner," she said.

Pistorius competed in the Paralympics and last year he achieved his dream by competing against able-bodied athletes in the Olympics.

After news broke on Thursday, rumors circulated through Twitter that Reeva had shown up at Pistorius's house to surprise him. But Polgreen said those rumors didn't come from police. And police say they know nothing about a claim that the incident was a case of mistaken identity.

"The police said there had been reports of incidents of a 'domestic nature.' They didn't go into details of what that meant, but they were also interviewing neighbors. And there were reports that there may have been a very loud fight of some sort, shouting coming from the house in the early hours of this morning," she said.

Pistorius appeared in court Friday morning, where he sobbed before the court. His bail hearing was ultimately post-poned until Tuesday. Police have said they're going to oppose bail, which Polgreen says, could be an indication they think there's a strong case against him for murder.

It is unknown if Pistorius legally owned the handgun found at the scene, but it is legal to own a handgun for self-defense in South Africa.

"In the years immediately after apartheid, crime really spiked. Everybody was terrified that under the new government there was going to be a kind of lawlessness and in a way there was, with huge numbers of new gun registrations in that era," she said

In 2004, South Africa passed a new gun control law that allowed people only one gun. Every gun had to be licensed and in order to own a gun you had to complete training courses, Polgreen said.

"It used to be that 30 percent of women who were killed by their intimate partners were killed with a gun. That number has now dropped to 17 percent," she said.

South African gun control advocates say the new legislation has been effective, but now there will be questions about whether more needs to be done to stop tragedies like this from happening, Polgreen said.