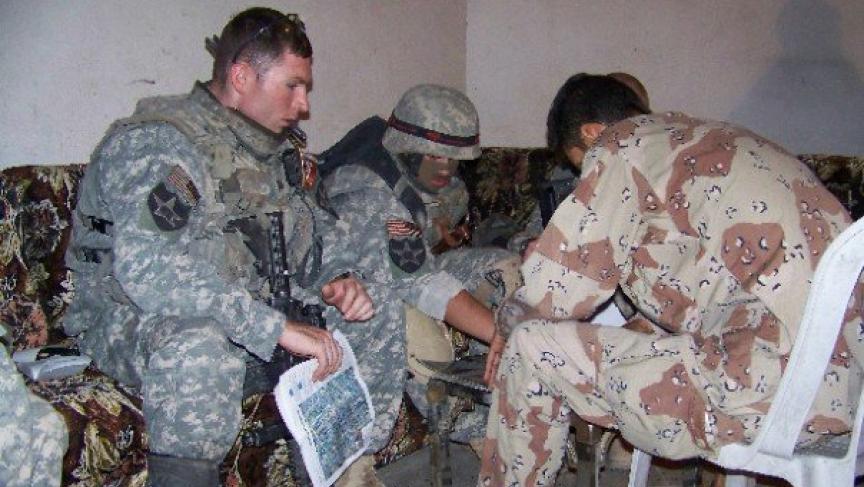 Former US Army Capt. Blake Hall, far left, worked to bring the family of his Iraqi interpreter, right, to the United States. Roy was killed in 2008. His family recently arrived in California. (Photo courtesy of Blake Hall.)

Editor's note: This story was produced by Jill Replogle, for the public radio collaboration, Fronteras.

Afghans and Iraqis who work with American troops often place themselves and their families in great danger by affiliating themselves with the United States.

In exchange, a path to the U.S. — to safety — can be offered. But that journey, heavy with bureaucracy and security checks, can take years.

But that wasn't good enough for former U.S. Army Capt. Blake Hall. Hall worked tirelessly to bring the parents and siblings of a young Iraqi interpreter, known as Roy for security reasons, to the United States. In just an hour, they'll arrive.

Hall says it's just settling in that this day is finally here.

“They’re out of Iraq, they’re out of harm’s way,” he said. “And honestly, I just feel so much relief about that now, I’m just looking forward to meeting them in person and to spending the next two days with them.”

Roy was Hall’s interpreter in Iraq during nine months of firefights, raids on enemy compounds and long nights on watch. They became tight.

Hall admired Roy’s sense of humor, and his bravery. Interpreters are not armed, yet they still have “bullets flying overhead.” Hall said Roy did his job right by his side.

When Hall’s tour ended, the next step for Roy was to wrap up his final three months of interpreting for soldiers and then become eligible for a special U.S. visa offered to Iraqis who worked with the military. Hall was working on Roy’s visa paperwork when he got an email. A bomb had killed Roy, along with six American soldiers.

“I felt like I had just been punched in the stomach,” Hall said.

For more than year after that, Hall was numb, processing his combat experience and Roy’s death. He remembered his promise to bring Roy to the U.S. — to safety. Hall knew insurgents targeted Iraqis who collaborated with the United States.

“Ultimately, I decided I needed to find his mom, just to tell her how important he was to us and how special he was,” Hall said. “Really, in some ways, to ask her for her forgiveness. I still felt very guilty about leaving him behind. He was the only member of my platoon I didn’t bring back.”

Hall finally tracked down Roy’s mom in Baghdad and called her. She didn’t hate him, as he had feared. But she and her family were in danger. Roy’s work as a military interpreter smeared his relatives in the eyes of insurgents. They were all targets.

Hall vowed to get them out of Iraq. He worked with pro-bono lawyers and the Iraqi Refugee Assistance Project, a New York-based nonprofit. He called legislators and wrote op-eds.

Under U.S. policy, Iraqis who worked for the American government are placed on an expedited track for U.S. visa processing. It's a policy that extends to those workers’ families too. But lengthy security checks and a lack of personnel to process applications make long waits the norm.

Now, nearly two years after Roy’s family applied for refugee status, he was in the car heading to the San Diego airport. Still, Hall's disgusted the United States doesn’t take better care of its allies.

At the San Diego airport, Hall waits for Roy’s parents, his 11-year old sister, and 22-year old brother. Also waiting for them: immediate family members who moved to San Diego from Iraq years ago. One of Roy’s cousins also served as a military interpreter in Iraq. He has flown in from El Paso, Texas, to greet them too.

When the family arrives, hugs and kisses are passed around. The family looks exhausted. They’ve been traveling for nearly 40 hours.

Bags are loaded into a van and the group caravans back to the apartment where Roy’s family will stay until they can get their own place. The women bring out plates of food, including rice croquettes stuffed with ground beef and almonds, and a kind of Iraqi pizza. As everyone feasts, talk turns to politics in Iraq, and how unstable the country is.

As it is for most refugees, finally arriving to a new country is a mixed bag.

In the next few weeks, a local refugee resettlement agency will help the family get oriented and find an apartment. Roy’s sister will enroll in school. His father will get help finding work.

For now, Roy’s family is relieved. And they credit Hall for that.

“I see Blake as my angel,” said Roy’s mother. “The angel that God sent to me. He’s like Roy. Because he loves Roy — I see Roy in him.”

Roy’s father says he dreamt of his son twice during the long flights over to the United States. In his dreams, he felt that Roy was “most likely happy ... looking from upstairs, looking at his family now gathering with Blake.”

The family’s first night in the US wears on. In the morning, they’ll start the rest of their lives.