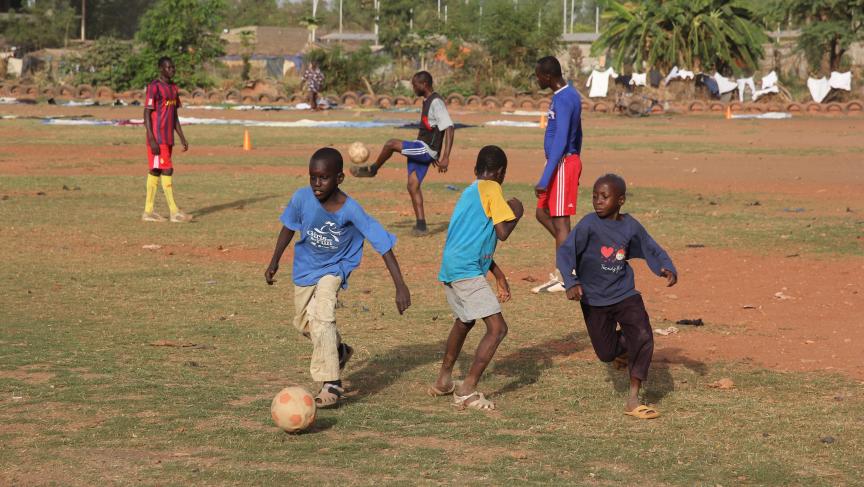 Share
As the late afternoon sun slides toward the night, shadows stretch across a patch of dirt in downtown Bamako. Four boys in ragged clothes and sandals, their feet smudged with rust colored soil, have just minutes left to finish their soccer match before darkness. In this poor part of the city, the goal has no net, just a ditch that catches the ball. They may not be rich, nor have a bright future, but they're fierce soccer players, and equally fierce patriots who know all about the fighting far away. "We are good Malians," one of the boys said. "Mali is our land and we want to keep moving forward. We want to liberate the north." They sound like young warriors, stout defenders of their land. But everyone knows the enemy, the jihadists, were a tough foe who easily dispensed with the Malian army last year. French and Malian troops, assisted by air strikes, have chased most of the Islamist fighters out and into the vast desert. But the jihadists continue to mount attacks in and around the city of Gao. Part of what made it so difficult to fight them is the fact that there are those in cities like Gao who sympathize with them, perhaps even support them. Bama Toure, silver haired and slow moving, welcomed me to the courtyard of his simple home near the center of town. He keeps birds and chickens here and his wife cooks over an open flame. It's a tranquil setting for a conversation about a disturbing subject. Just a few hundred yards from here, in an open field, the jihadists who ran this city for 10 months carried out harsh and bloody punishments, cutting off people's hands and feet. But Toure's reaction to the brutality brought upon his neighbors: seeming acceptance. "Yes, what they did wasn't hidden. But it's the law, Sharia law. Generally, it was for people who broke the law, thieves or a man seen with a woman he wasn't weren't married to, then they cut off their hand," Toure said. That kind of reaction isn't a surprise to Malian political analyst Adam Thiam, in spite of the abundance of images of Malians greeting French troops as liberating heroes. He said he's spent long hours meeting with people in Gao, trying to understand how militant groups were able to take over there. "And I was under the impression in talking to some groups that the Salafists were not a problem, that people who had their hand cut were real thieves," Thiam said. Thiam said the militants have been able to exploit many people's adherence to a more fundamental strain of Islamism. But they also tapped into northern Malians sense of alienation from their own weak government, one unable or unwilling to make its presence felt outside larger cities. "There are people in this community who have never seen Malian doctor, a Malian teacher or a Malian soldier," he said. And so the jihadists came in, filling the vacuum with offers of help, help they could provide through the vast amounts of money they made engaging in kidnapping and smuggling. But they also issued demands, at the point of a gun. Local imam Zakaria Yahia Maiga watched them enter his mosque and take over. "Often, they would come here to pray and they would lay their guns down in front of them, scaring everyone," the Maiga said. Then they would take over, preaching their own form of Islam. They erected stark signs, black with white lettering, warning people that their version of sharia law must be obeyed. And they stayed for months, facing not even the whiff of a challenge from a Malian army that was in disarray. Now the army is back, and Major Colonel Didier Darko said it won't repeat the mistakes of the past, especially if the west is willing to help keep the militants at bay right here. Darko has trained with the military in the United States and he'd like the west to come here, to do more, to ensure the fighters don't simply slip across borders to plot their next attack. "They might be going somewhere else in another country," Darko said. "Somewhere where the situation is profitable to them, another weak state somewhere. So for this reason i think we have to really take care of all these places that are empty." The U.S. military is considering using more surveillance aircraft and possibly drones to patrol the vast sands of the Sahara. But analyst Adam Thiam doubts that will be enough. "They will not give up the desert. This is where they have invested the most and they know that an international presence will be not be sustainable and that the state of Mali will never have the means to find them," he said. But it seems Washington and other western governments remain reluctant to do more, at least militarily. The Obama administration, committed to pulling out of Afghanistan, fears another quagmire in Mali, especially when some observers say the jihadists pose no direct threat to American interests. Some, like Adam Thiam, suggest a focus on development and aid in northern Mali, to reduce the influence of those who preach jihad. All unnerving to Rama Toure as she cleaned up after cooking the midday meal. It's her husband who seemed not to mind the presence of the militants in his city — he didn't want her to be interviewed. But I sought her out, away from him, to ask what she thought. He face suddenly became shrouded with the memories. "The whole time I didn't budge, I stayed inside all the time," she said. "It was terrible, very very terrible." Gao is still a city on edge.There have recently been suicide attackers, gunfights and a huge 1,200 pound bomb found in the heart of the city. There seems no lasting peace and no easy path to finding a solution in Mali's shifting sands.