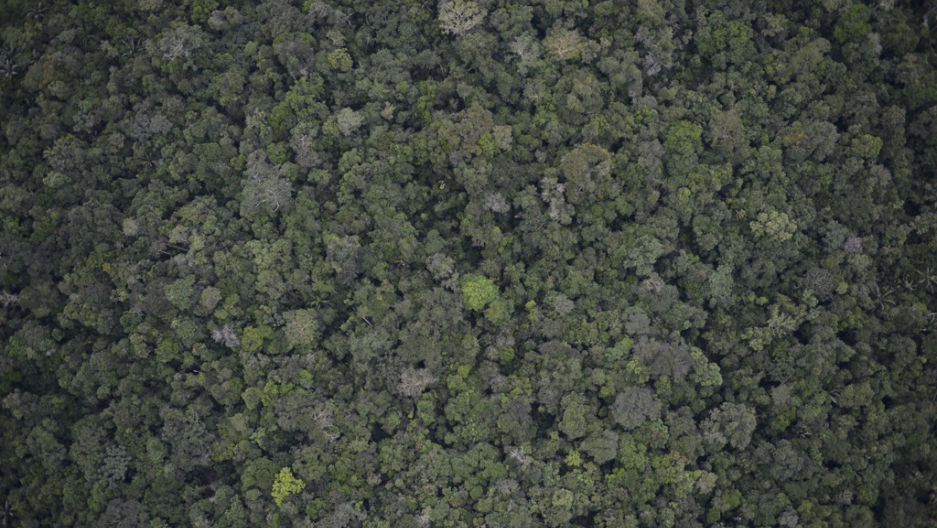 The Amazon rain forest is nearly the same size as the Lower 48.
Credit: Leo Ramirez
Share

LIMA, Peru — Deforestation in the Brazilian Amazon has jumped alarmingly, according to a new satellite study.

If confirmed, the survey, by independent Brazilian think tank Imazon, would be a sign that several years of record lows in jungle loss in the South American giant have come to a juddering halt.

It found that 82 square kilometers (31.6 square miles) of tropical rain forest were lost in December 2012, a 107 percent increase over the same month the previous year.

The study also revealed that December was the fifth consecutive month that deforestation had risen. From August to December, accumulated forest loss totaled 497 square miles — equal to the area of Los Angeles.

As a result, a total of 66.5 million tons of carbon dioxide — the principal greenhouse gas causing climate change — was released into the atmosphere as the jungle literally went up in smoke.

Beyond warehousing billions of tons of carbon, it is hard to overstate the Amazon’s value to humanity.

Tropical rain forests are the world’s most biodiverse ecosystems. And the Amazon, nearly the same size as the Lower 48, is by far the largest.

Home to roughly one-third of all plant and animal species on Earth and one-quarter of the planet’s freshwater, much of the economic and scientific potential of that staggering biodiversity — the irreplaceable result of hundreds of millions of years of evolution — has barely been explored.

Many experts believe that if cures for AIDS, cancer, the common cold or many other ailments are to be found, then the best place to look is in the world’s surviving rain forests.

The Amazon also plays a major role in regulating global weather patterns and rain generated by the giant jungle waters fields from Argentina to the Midwest.

An uptick in the ravaging of the Brazilian Amazon would vindicate green groups that had vociferously warned that various moves by the administration of President Dilma Rousseff would reverse hard-won advances in saving the Amazon.

One key move is a controversial new Forest Code, passed last fall and heavily backed by agribusiness interests and large landowners. Intended to regulate the amount of rain forest that is both preserved and cleared, the code allows an amnesty for landowners if they commit to reforest illegally cleared jungle on their land.

The Rousseff government has claimed that could result in the reforestation of 74 million acres of rain forest.

But the code also reduces the proportion of land that a farmer must keep forested, while green groups doubt the government will effectively police rapacious landowners in remote corners of the Amazon.

When congress passed a draft of the law last year, Marcio Astrini, coordinator of Greenpeace Brazil's Amazon campaign, accused the government of washing its hands of the responsibility to conserve the world’s greatest tropical rain forest.

"The result is a weak Forest Code, which does not protect our forests, and in the name of small farmers, benefits major deforesters,” he said in a statement. “Those who plunder our environmental heritage and destroy forests while betting on impunity are happy today."

Environmentalists even warned that just the promise of the new Forest Code was likely to encourage landowners to jump the gun and begin clear-cutting previously protected forests to create more fields for soy farming and cattle-ranching.

And in 2011, the government handed more responsibility for enforcing forest protection to local authorities — who green groups claim are more prone to corruption and vulnerable to pressure from major landowners, often with small armies of heavily armed foremen, in remote parts of the vast jungle.

Meanwhile, the Brazilian government is pushing ahead with a series of new, vast hydroelectric dams in the Amazon, which critics claim will encourage more loggers, poachers, miners and farmers to move into the jungle. High global commodity prices are also thought to be spurring the trend.

More from GlobalPost: Peru exporting outlawed timber from Amazon to the US

The Imazon study also found that the amount of forest degraded — in other words, damaged by human impacts but not cleared entirely — in December was 100.8 square miles, a 178 percent jump on December 2011.

Nevertheless, the one piece of good news arising from the study was that overall degradation between August and December of last year appeared to have fallen significantly, by 71 percent to 375 square miles, compared with the tally of 1,284 square miles for the same period of 2011.

There also remained some doubt over the results given that the Imazon study was carried out when clouds cover much of the Amazon basin.

Imazon said 56 percent of the region was covered during its December 2012 data gathering while 76 percent had been obscured by clouds the previous December.

For that reason, the Brazilian government’s official annual satellite survey of the Amazon, carried out by Brazil’s National Institute for Space Research, or INPE, is conducted in July, when the region is at its driest.

The last INPE survey, released in November several months after the raw data had been gathered, revealed that deforestation in the Brazilian Amazon, some 60 percent of the entire Amazon rain forest, had fallen to a 24-year low.

Although it sounds like a huge amount, it is worth remembering that the entire Brazilian Amazon is roughly 1.5 million square miles.

The decrease came after years of the Brazilian government, under pressure from green groups, increasing the resources it dedicates to enforcing environmental laws in the Amazon.

But, if further study proves Imazon's research right, that achievement will appear to have been short-lived.

GlobalPost sought comment from Brazil’s Environmental Ministry but spokeswoman Gerusa da Silva Barbosa said the only deforestation research it publicly responds to is the INPE study.