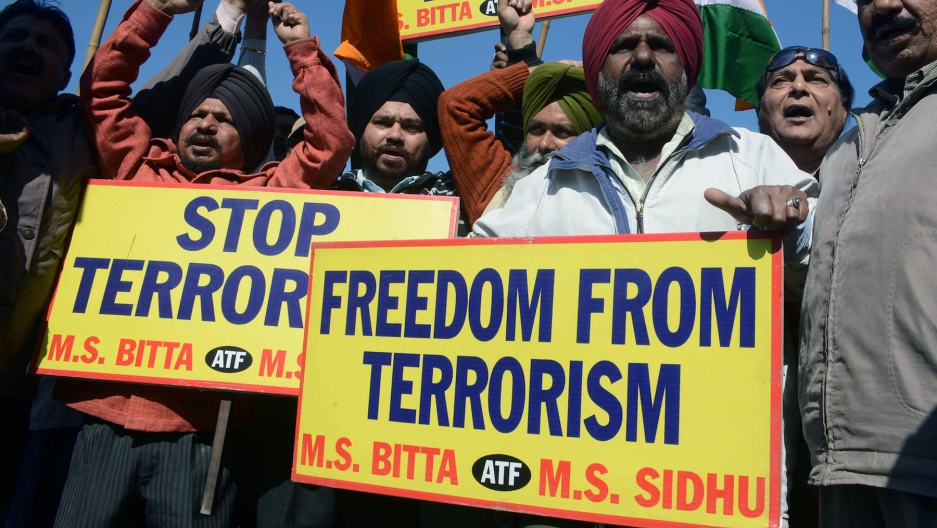 All India Anti Terrorist Front (AIATF) activists shout slogans as they celebrate the execution of Mohammed Afzal Guru, in Amritsar on February 9, 2013. A Kashmiri separatist was executed Saturday over his role in a deadly attack on parliament in New Delhi in 2001, an episode that brought nuclear-armed India and Pakistan to the brink of war.
Share

With fat-frame spectacles and a cherub's face, India's president doesn't look like a bloodthirsty killer. But in his first seven months in office, he's already set the local speed record for sending prisoners to the gallows, and it looks like he may just be getting started.

According to the Times of India, Mukherjee has already presided over more executions than his predecessors managed in 15 years.

In November 2012, Mukherjee quietly okayed the secret dawn execution of convicted Pakistani terrorist Ajmal Kasab, caught on camera during the November 2008 terrorist attacks in Mumbai. Earlier this month, he approved the secret dawn hanging of convicted Kashmiri terrorist Afzal Guru, who was convicted of plotting the 2001 attack on the Indian parliament based primarily on a confession made in police custody. On Thursday, Mukherjee reportedly rejected the mercy pleas of four associates of the famous bandit Veerappan -- clearing the way for the execution of the men, who were convicted of killing 22 people, including policemen, in a landmine blast in 1993. And there are reportedly eight more convicts whose mercy pleas are pending.

Human rights activists have condemned the executions that have already been carried out on moral grounds, disputing the government's right to kill its citizens for any reason. But whatever your views on the death penalty, the timing and manner of these hangings is deeply troubling.

With a national election scheduled next year and Mukherjee's Congress Party facing a foe known for militant ethnic nationalism, the speedy executions of Kasab and Guru have the earmarks of a political gambit to defend the Congress against opposition claims that it is "soft on terror." As right-wing commentator Kanchan Gupta has noted, the secrecy surrounding the actual hangings only served to heighten the impression that the government was doing something shady -- though in every other respect it followed the established legal procedures. And the swift "also-ran" rejections of the mercy pleas of the four bandits stinks of an effort to prove that politics had nothing to do with the timing of the first two hangings.

“It appears that the Government of India in its attempt to address political fallout of the botched up execution of Afzal Guru ... will carry out further executions of death row convicts not connected with political sensitivities,” said Suhas Chakma, who heads the Asian Center for Human Rights (ACHR).

Think timing doesn't matter?  The government has, naturally, said politics and next year's election had no bearing on its sudden alacrity in executing convicts. But according to a report in Thursday's Hindu, there are many condemned criminals whose mercy pleas have been under consideration for more than a decade, suggesting that speedy resolution is the exception rather than the rule. ACHR notes in a press release issued Thursday that some 1500 Indians were sentenced to death between 2001 and 2011 -- a period in which India only actually executed a single person. And Guru, at least, had reportedly not exhausted his final avenue of appeal when he climbed the scaffold.

Meanwhile, though Kasab was more or less caught with the proverbial smoking gun, Guru's case left considerable room for reasonable doubt -- a fact that was lost in the fury over the Parliament attacks and the rush to find someone to punish. As Open's Mihir Srivastava points out, Guru was convicted of murder and waging war against the state largely on the basis of a confession that the Supreme Court itself termed "unreliable," along with telephone records that showed little apart from demonstrating that he had been in contact with Ghazi Baba, alleged head of the Kashmiri jehadi group Jaish-e-Mohammed.

But there were strange holes in the prosecution's case.

According to the chargesheet filed by the Special Cell [of the Delhi Police] in 2002, the JeM’s supreme commander in India, Ghazi Baba, had been in touch with Afzal and Shaukat through satellite phone No 8821651150059 and Swiss telephone No 491722290100, writes Srivastava.

This was meant to be clinching evidence of the Guru cousins’ link with the terror attack. But, strangely enough, the Special Cell didn’t deem it fit to investigate this any further. Says the chargesheet: ‘A request for obtaining the call details of the international telephone numbers and satellite phone numbers, which figured during the investigation of the case, has been made to Interpol, but the report is still awaited.’ This lead was never discussed or mentioned during the protracted period of the trials. Is the Interpol report, if obtained, a secret?

That's not all. Some evidence suggests that Guru was in fact working on behalf of the Jammu & Kashmir police.

About a year before the Parliament attack, Afzal was in custody of the J&K Police, having been detained at an STF camp for his links with Ghazi Baba. But despite this piece of advance intelligence that he allegedly had links with the LeT, the STF set him free unconditionally, Srivastava writes.

During his trial, Afzal was trying to point out that he had been in touch with the J&K Police’s STF, but the nature of this association was never investigated by the Special Cell.

The Special Cell got the Seal Team Six treatment from a few news outlets after Guru's conviction, and again after Saturday's execution. But it's as well-known for accusations of "fake encounters" (or extrajudicial executions) and alleged frame-ups as it is for brilliant detective work.

It was the Special Cell that was responsible for alleged "fake encounters" -- or staged shootouts to justify the killing of a suspect -- at New Delhi's Batla House in September 2008, in the parking garage at the Ansal Plaza shopping mall in 2002 and in the city's colonial heart of Connaught Place in 1997.

And some 70 percent of the always high-profile busts made by the Special Cell were later dismissed for lack of credible evidence -- sometimes after the suspects had spent as much as six years behind bars, according to a study of Special Cell cases conducted by professors at New Delhi's Jamia Millia Islamia university.

Meanwhile, as Human Rights Watch noted in its condemnation of Guru's execution, many Indian activists have argued that he didn't receive adequate legal representation during the period between his arrest and confession. And Amnesty International alleged that he wasn't allowed to be represented by the experienced lawyer he requested.

“Serious questions have been raised about the fairness of [Afzal] Guru’s trial. He did not receive legal representation of his choice or a lawyer with adequate experience at the trial stage. These concerns were not addressed,” Amnesty's India program director Shashikumar Velath said in a statement.