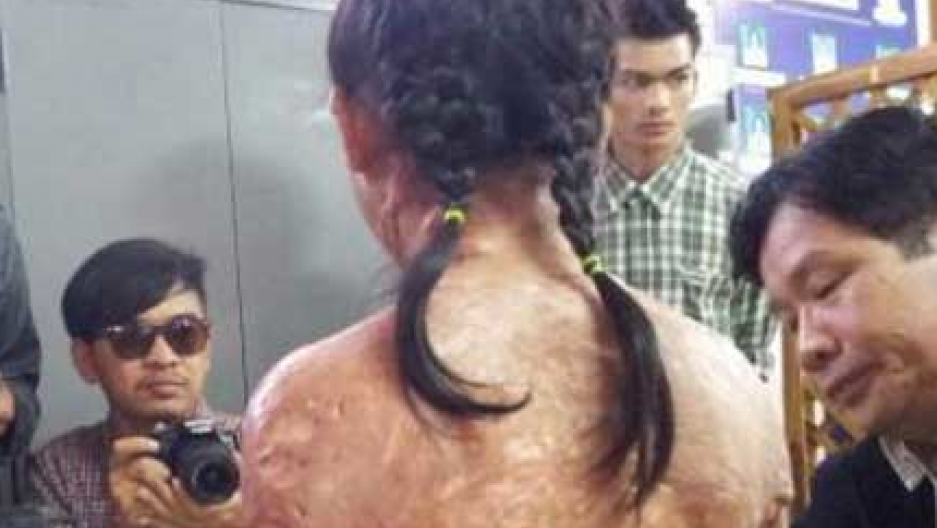 An image published by Daily News, a Thai-language outlet, of a 12-year-old from Myanmar who was allegedly kidnapped and forced to work for a Thai couple under torturous conditions for five years.
Share

If an image is vile enough to cause readers to upchuck into their cereal while perusing the paper, it doesn't make the front page.

Well, I hope you're not eating breakfast.

This is the full photo, taken in a rural Thai police station, of a 12-year-old girl -- shirtless and pigtailed -- facing away from the camera. Her back has been boiled to the raw meat. She's surrounded by grown men taking snapshots and it appears she's being examined by a cop.

As the Thai-language "Daily News" reports, the girl hails from the persecuted Karen ethnic group in Myanmar. She's reportedly told police that a Thai couple kidnapped her, forced her tend to their house pets like a slave and tortured her with boiling water. As she told the Daily News, it was "like falling into hell."

For the full details of this sickening saga, I defer to a Thai writer who blogs in English, Kaewmala, who has posted a lengthy account on the Web site Asian Correspondent. Her excellent post explains how this case is reverberating throughout Thailand.

Instead, I choose to focus specifically on Thailand's police.

Last year, GlobalPost published "Seafood Slavery," my investigation into migrants (mostly from Myanmar) duped into servitude on filthy fishing trawlers. As with this girl, those victims were failed by Thailand's police.

A pertinent quote from the series:

The accounts of former captives portray local police as vultures, not liberators. “The Thai government must address the fact that most Thai police at local and provincial levels are predators of migrants,” said Phil Robertson, the Bangkok-based deputy director of Human Rights Watch’s Asia division.

“Let me use that word clearly,” Robertson said. “Predators. Who will extort and abuse migrants. If a migrant goes to make a report at the local police station, they will not be listened to and, in fact, will likely be arrested.”

Three years ago, this girl slipped away and made her way to the police.

They reportedly returned her to her captors.

There she remained for two more years. When she finally got up the nerve to escape once more, the Daily News reports, she was coerced by local villagers to try her luck with the cops once again.

But this photo reveals that, while in the hands of the police, she was brought out -- topless and scarred -- before grown men with cameras and inquisitive cops.

A little girl, failed once again, by the police.