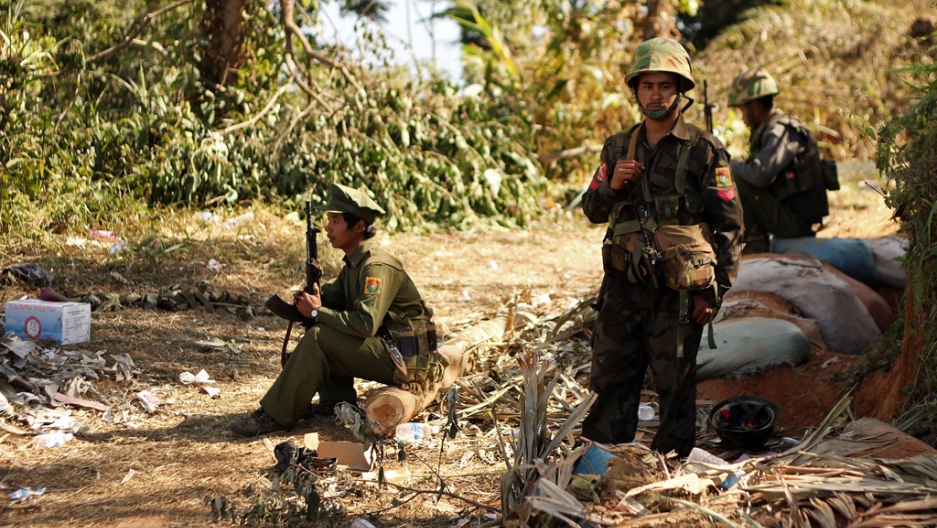 Kachin Independence Army (KIA) 3rd Brigade soldiers stand guard as they secure an area on Hka Ya mountain in Kachin province on Jan. 20, 2013. Fighting in Myanmar continues between Myanmar’s military and the KIA — a rebel group which occupies territory along the Chinese border.
Credit: STR
Share

BANGKOK, Thailand — Slain troops dumped in ravines, mortars raining down from above and helicopter gunships firing rockets into guerrilla camps. These are the ugly scenes Myanmar’s new wave of reformist rulers were supposed to resign to history.

Instead, grisly warfare continues to play out in the nation’s north and, in a 21st century twist, on YouTube via guerrillas with digital cameras. The war pits Myanmar’s military against an outgunned but plucky native faction, the Kachin Independence Army, which occupies territory along the Chinese border.

For the combatants, the stakes amount to greater command of a region nearly the size of South Korea (or the US state of Indiana). The hilly borderlands are rife with gold, jade and timber.

But China and America have great stakes in this battle as well.

Both want the fighting to stop. That the world’s top superpowers can’t pressure the two sides to hammer out a cease-fire is a testament to the conflict’s stubbornness. The most recent cause for hope — a Beijing-brokered sit down on Feb. 4 between both sides — did not end the war.

Enmity runs deep on all sides. Myanmar’s authorities regard Kachin guerrillas as terrorists. And many Kachin see negotiations as a con game concocted to pause fighting and replenish the front lines, according to James Lum Dau, a colonel and foreign liaison with the Kachin Independence Army.

“Munitions, arms and rations go dry,” he told GlobalPost. “Then they say, ‘Hey, we better talk peace!” We’ll talk for two days and then, immediately, they send weapons, rations and people back to fight again.”

So why show up?

The conflict has raged on for 20 months. In that time, Myanmar, cheered on by the United States, has continued its much-hyped metamorphosis.

Until recently isolated and shackled by US sanctions, the country formerly titled Burma has hosted President Barack Obama, repealed more repressive laws and taken in a record-setting 1 million tourists. Famous for its Cuba-like absence of American companies, the country is bracing for the arrival of 7-Eleven, Best Western and a Coca-Cola factory.

Top diplomats now cite Myanmar as a template for peaceful regime change. In outgoing US Secretary of State Hillary Clinton’s recent farewell speech, she urged diplomats to “keep looking for the next Burmas.”

Meanwhile, the same style of brutal jungle warfare that darkened Myanmar’s reputation in the first place rages on. In statements, the US “strongly opposes the ongoing fighting” that has “undermined efforts to advance national reconciliation.” But the fighting also threatens to undermine America’s decision to collaborate with a state still at war with its own citizens. The conflict, according to Human Rights Watch, has displaced roughly 100,000 civilians.

While very few Americans know of the Kachin, members of the roughly 1.5 million-population group are mindful of America’s radical influence on their culture.

Most are Baptist, the result of US missionaries reaching the far-flung Kachin in the early 19th century. The missionaries also recorded their spoken language into a Roman alphabet script that is still used today.

Later, their prowess as jungle fighters was recognized in the World War II era, when British and Americans trained the Kachin to fight off Japanese invaders. An officially sanctioned US military historical account titled “US Army Special Operations in World War II” notes that Kachin recruits were used to “build perhaps the most successful guerrilla organization of World War II.”

According to the account, American intelligence officers “found the local diet barely palatable and were repelled by the Kachin practice of collecting the ears of the dead [but] they appreciated the courage, loyalty and honesty of the tribesmen.”

Though largely forgotten by Americans, the Kachin still regard the US with affection, James said.

“We wish so badly America would do something to help us now. But you are so many thousands of miles away,” James said. “It says ‘In God We Trust’ on your money. It’s your time to expand the kingdom of God. Your people need to think about this deeply.”

In lieu of America, they are reliant on a much closer intermediary: China.

“We have no other choice,” he said. “If you get a headache, you have to take the medicine available regardless of the quality.”

Much of the Chinese-Myanmar border, a stretch longer than the US Pacific coastline, touches Kachin territory. And much of the timber and jade extracted from Kachin state ends up in China. This trade flow slows considerably during spells of unrest.

A $3.6 billion Chinese dam project, now on hiatus, intends to zap power from electricity-starved Kachin state to energy-hungry Yunnan province. And when fighting heats up, refugees and even lobbed munitions — according to Kachin sources — spill across the border.

The recent China-brokered talks were not fruitless. Myanmar’s government cleared the way for badly needed United Nations aid shipments to bleak refugee camps in the region. But the government came no closer to its ultimate goal: swallowing up the Kachin Independence Army as a “border guard force” under its command.

In the eyes of Myanmar’s generals, the Kachin guerrillas are dangerous radicals. Noting White House sympathies for the Kachin militants, Myanmar’s government-run outlet “New Light of Myanmar” wrote last month that US statements can “cause misunderstanding” because they don’t mention “terrorist actions and atrocities committed by the KIA against innocent people.”

“The mainstream Burmese media is totally biased toward Burmese and KIA always will be the villains until they give up the fight,” said Hla Oo, a blogger and ex-soldier from Myanmar’s army who now translates and opines on Burmese-language news stories. “Only then will they be brothers again.”

“Blowing up ... passenger trains regularly and then shooting at the traveling passengers — which I witnessed with my own eyes in 1974 when I was a soldier in the Burmese army — and killing hundreds is not a tale as it happened many, many times,” Hla Oo told GlobalPost.

In the style of most Burmese news reports, he is sympathetic to the Kachin people but contemptuous of the Kachin Independence Army. His blog describes their guerrillas as rapists and extortionists.

Sympathies for Kachin guerrillas run shallow among the Burmese, the country’s most populous and powerful ethnic group. Even the most celebrated and famous Burmese person on the planet — Aung San Suu Kyi, America’s proclaimed “principal interlocutor” — has been reluctant to say much about their condition.

Her political party “has not pressed the military to curtail, let alone prosecute, war crimes being committed against the ethnic Kachin population as part of a continuing counterinsurgency operation in the north,” wrote Kenneth Roth, the executive director of Human Rights Watch, in a recent statement.

The Kachin guerrillas are now reeling from a prolonged offensive entailing mortar rounds and helicopter gunship bombardments. Their commercial and strategic stronghold is Laiza, a border town that has prospered from trade with China. But the town has taken heavy shelling and even the guerrillas concede that it is now encircled by Myanmar troops.

The Kachin Independence Army is only a defensive force deployed to hold territory, James said, and isn’t poised to launch offensive strikes. Most of its weapons, he said, were stripped off dead government troops.

But the same resourcefulness that enamored the Kachin to Americans in World War II, and allowed them to retain partial control of their terrain for the decades since, will help them stave off total defeat, he said. The war, James said, will likely persist unless the US or China can coax Myanmar’s generals away from the battlefield.

“According to psychology, yes, it’s bad to lose our headquarters,” he said. “But this is only one small valley. Take it! I don’t care. We still have plans that I shouldn’t openly expose.”