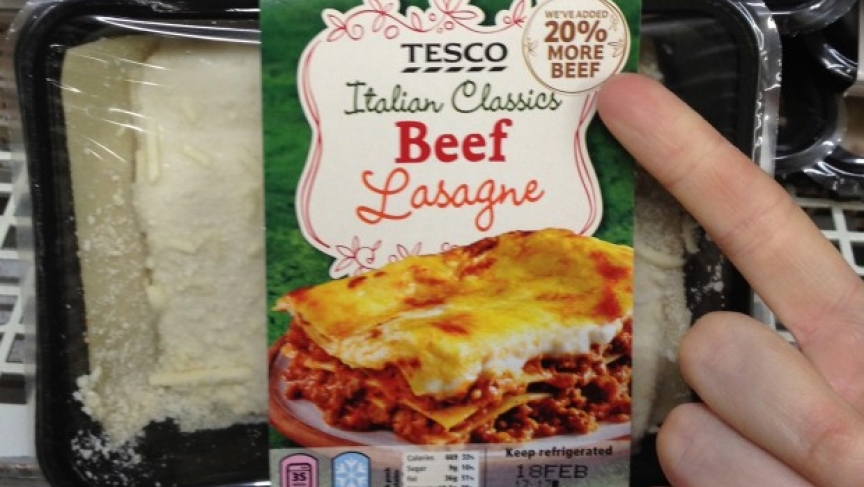 Tesco promises 20 percent more beef in its lasagnas — Or not. The company revealed that some of its meat dishes may contain "in excess of 60 percent horse meat." (Photo by Leo Hornak.)

Europe’s horse meat scandal grows by the day, with leaders there now calling for a second emergency food summit.

Horse meat has been found in frozen lasagnas and other products supposedly containing beef in England, Ireland, France and Sweden. Several other European countries are searching their own shelves. European meat production is thought to be subject to tough controls, but clearly the system is breaking down.

That’s what happened in Ireland, investigators say, where horses injected with a medicine poisonous to humans had their papers doctored to pass food chain inspections.

Stephen Philpott, the chief executive of the Ulster Society for the Prevention of Cruelty to Animals, says there was a large demand from the European mainland for horse meat — demand that couldn’t be met by traditional UK suppliers.

“Between them all, they conspired to work out a system to get horses which were unfit for human consumption,” he said. “To get them re-microchipped. We reckon there could be as many as 70,000 horses unaccounted for in Ireland.”

As that scandal unfolds, a second has emerged: passing off horse meat, edible or not, as ground beef. So far, horse has been found in major brands of frozen lasagna, for example, implicating retailers and suppliers across the continent. The UK’s Environment Secretary, Owen Paterson, says Europe is quickly developing a credibility problem.

“It is unacceptable that people have been deceived in this way,” he said. “There appears to have been criminal activity in an attempt to defraud the consumer. The prime responsibility for dealing with this lies with retailers and food producers.”

Paterson said they need to demonstrate they’ve taken all necessary actions to ensure the integrity of the food chain in his country.

Europe does already have high standards for food safety, says Chris Elliot, an expert on the subject at Queen’s University in Belfast. He said where the system breaks down, and where fraud is easiest, is with processed foods, which he called a complex business.

To find out where that material came from in the first place, he said, is close to impossible.

That means tracking down the people responsible for the horse meat fraud will take time. One line of investigation leads to French suppliers. But they point their fingers at Romanian slaughterhouses. Stephan Le Foll, France’s Agriculture Minister, said investigations will be tough, because the procurement system uses very complicated commercial routes.

“I’ve even got the impression that a Cypriot trader subcontracted to a Dutch trader who then himself sub-contracted,” he said. “And now we get to Romania and Poland. So there too is work to be done to get out of this fog.”

The fog obscures more than just the origin of meat, Elliot says. And it reaches well beyond Europe.

“One of the great food frauds at the moment is olive oil,” he said. “There’s massive amounts of fraud in fish. Honey is implicated. Milk, fruit juices. It happens with many types of food.”

Elliot says the problem could be fixed with stricter regulations and controls. But that would drive food prices up 10 to 20 percent.

Meanwhile there’s one sector in Europe offering another solution: the “eat local” folks.

Antonio Gomez, the owner of a family-run butcher shop in Barcelona, said small outfits like his get their meat from nearby producers they’ve known all their lives.

“And it’s all certified,” he said, showing the forms that come in with each butchered animal. “This tells you where the creature was born, raised, what it ate and when it was slaughtered.”

There’s no chance horse or any other meat can sneak its way into his display case and pretend to be something else, he said.