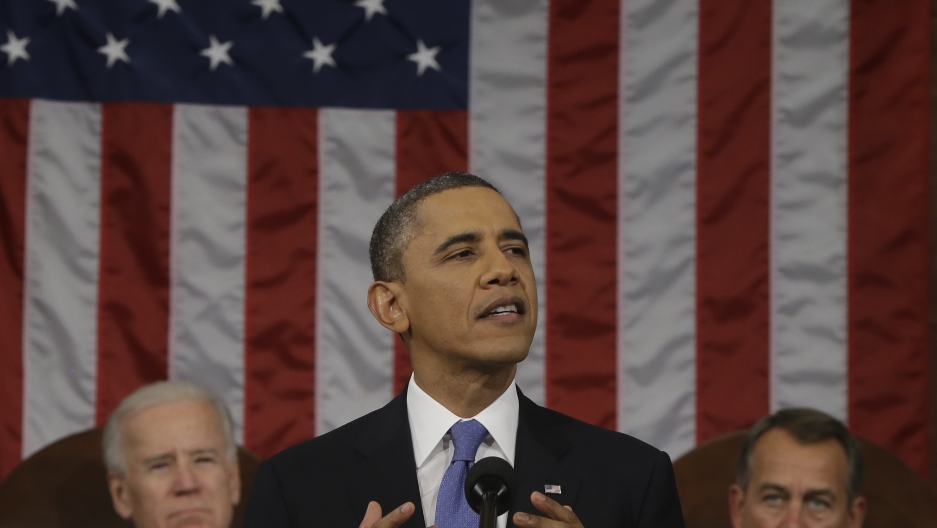 For the first time since the Great Depression, when Franklin D. Roosevelt demanded ”a permanent readjustment of many of our ways of thinking and therefore of many of our social and economic arrangements,” an American president Tuesday night turned his State of the Union address into a sustained attack on inequality of income and the yawning gap between rich and poor in American society.

President Barack Obama, in an address meant to set the tone for his second and final term, vowed to “restore the basic bargain that built this country — the idea that if you work hard and meet your responsibilities, you can get ahead.”

Carefully avoiding the crasser language his critics often depict as class warfare, Obama made clear that he would not allow pressing and necessary economic reforms amid a looming fiscal crisis to exacerbate a four-decade trend that has seen the incomes of the wealthiest Americans skyrocket while the middle class and below have stagnated, and in some cases lost ground.

Making this assertion in the State of the Union speech, a constitutionally mandated address traditionally used to lay out legislative goals for the coming year, Obama placed these great disparities squarely at the center of his final four years in office.

“There are millions of Americans whose hard work and dedication have not yet been rewarded,” he said. “Our economy is adding jobs — but too many people still can’t find full-time employment. Corporate profits have rocketed to all-time highs — but for more than a decade, wages and incomes have barely budged.”

Indeed, adjusted for inflation, the wages and incomes of most Americans have barely budged since the late 1970s. Studies by think tanks, universities and government agencies show that nearly all the wealth created during fast-growth decades since 1980 have gone to the top 20 percent of earners.

The share of US national income going to the richest 1 percent of Americans has doubled since 1980, from 10 percent to 20 percent, about where it was in 1910, according to non-partisan Congressional Budget Office. A mere 16,000 Americans control over 5 percent of all American income, a level last reached in 1929, on the eve of the Great Depression.

In the prescriptions outlined Tuesday night, President Obama came down firmly on the side of those who argue that the trickle-down economic prescriptions that were implemented in the early 1980s have failed. There was little effort to straddle the issue, as Bill Clinton did during his more centrist presidency. And unlike his recent inaugural address, which dealt with the issue of economic inequality in a more soaring, less specific manner, Obama’s State of the Union included specific legislative and reform proposals.

”How do we make sure that hard work leads to a decent living?” the president asked. He answered with proposals that, by and large, would raise taxes slightly for upper income individuals and businesses, and provide higher incomes, tax relief, educational subsidies and jobs for lower and middle income families.

While these proposals will be subject to approval — and sometimes bitter debate — in Congress, the direction of Obama’s plans show clearly he wants a reversal in income inequality to be a hallmark of his tenure. He proposed:

*Increasing the federal minimum wage to $9.00 an hour from its current level of $7.25, a highly controversial proposal that would raise the incomes of the poor but some economists worry might lead small businesses to cut jobs.'

*A “comprehensive tax reform” that continues the small steps taken at the New Year toward a more progressive system, closing loopholes for corporations and the super-rich to ensure that “billionaires with high-powered accountants can’t pay a lower rate than their hard-working secretaries.

*Investments in new “manufacturing hubs” to encourage the recent trend of American companies “re-shoring” factory jobs to the US as wages, regulatory risk and transportation costs erode the advantages of producing overseas.

*Two classic stimulus programs: “Fix It First” and a “Partnership to Rebuild America.” The first will target some 70,000 bridges and tunnels in need of repair and modernization. The second will create a public-private partnership to construct and upgrade pipeline, port facilities, rail lines and school infrastructure.

*New regulations to make it easier for those current on their mortgages to win approval for refinancing at the current, historically-low rates;

*Programs to provide universal access to pre-school, an area largely left to the private sector in America and thus out of reach of low income families and new rules to penalize universities and colleges where tuition rises disproportionately. The penalties for offending campuses could include holding back all-important federal research grants, tax relief and other subsidies.

Tactically, Obama appears to surmise that his firm victory in last November’s election and the disarray it has engendered in the ranks of the GOP will make it difficult for Republicans to continue to obstruct his legislative agenda.

While Republicans have given some ground of late — expressing an open mind toward immigration reform, for instance, and relenting in New Year’s “fiscal cliff” talks by allowing the very top rate of taxation rise for those making $400,000 or more — Obama’s ambitions may run up against hard, partisan realities in Washington.

Seeking to frame this debate, Obama said “cutting spending is not an economic plan.” He added that, while he was open to a grand bargain that would cut soaring costs of Medicare and Medicaid, “We can’t ask senior citizens and working families to shoulder the entire burden of deficit reduction while asking nothing more from the wealthiest and most powerful.”

Most economists agree that a mixture of tax hikes and spending cuts must be agreed to in order to stem a mounting national debt that will soon reach 100 percent of GDP — an historic first in which the size of the debt outstrips the size of the American economy.

Thomas Mann, a Brookings Institute scholar on Congress, noted that those who exclusively advocate cuts and rule out tax hikes — as the GOP did during Obama’s first term — are being undercut by the negative effects such policies are having on Europe’s highly indebted, advanced economies.

Europe is substantially behind us in levels of growth, unemployment rates,” he said. “The evidence on cutting spending and reducing deficits in the short term is not very encouraging as a policy approach to promoting economic growth.” Precisely this fact, he added, explains the current scramble to undo the “sequester,” as the automatic spending cuts due to hit in March is known in Washington.

Obama’s speech essentially dares his Republican opponents to cleave to austerity or to the Reagan-era supply side ideology that most economists identify as the source of the current era of income disparity. Sluggish as the recovery may be — and American incomes remain 7 percent below their 2007 peak — Obama channeled another crisis-era president in making the case that the worst is behind us.

Roosevelt told Congress in 1934, his first State of the Union after the passage of his sweeping New Deal during the Depression, that the job was to “continue the restoration of our national wellbeing and, equally important, to build on the ruins of the past a new structure designed better to meet the present problems of modern civilization.”

Cue Obama, 2013: “Together, we have cleared away the rubble of crisis, and we can say with renewed confidence that the state of our union is stronger,” he said.

It was the speech many of his supporters have waited four years to hear, one that sets the bar high, picks a very public fight with his ideological opponents, and places this president squarely on one side of the era’s greatest economic debate over what is arguably this generation’s greatest challenge: rising income inequality.