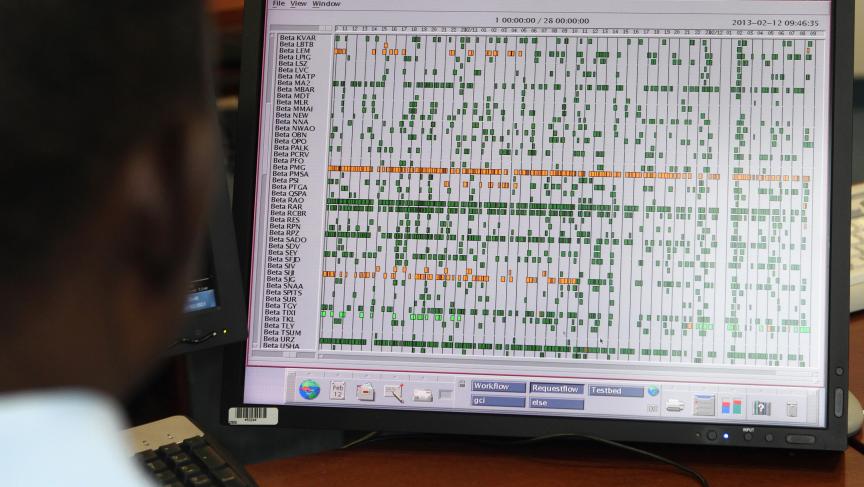 An analyst looks at a computer monitor in the control room of the international nuclear test monitoring agency, Comprehensive Nuclear Test Ban Treaty Organization, in Vienna on Feb. 12, 2013. (Photo by Heinz-Peter Bader/Reuters.)

North Korea was met by near-universal condemnation for its third-ever nuclear test, conducted shortly before noon Tuesday in North Korea — Monday night, in the United States.

The blast, believed to be the biggest yet, led to a 5.1-magnitude earthquake — the first overt signs that the reclusive state had followed through on a pattern it established back in 2006: rocket launch, followed by nuclear test, separated by just a few months.

South Korea, Japan, the United States and even China, the North's lone ally, and the primary guarantor of the nation's economy, condemned the blast. South Korea, which currently holds the rotating position of chairman of the United Nations Security Council, called emergency meeting of that body. It's expected that new sanctions will be imposed, though there's little else that can be sanctioned, unless China were to agree to halt its own trade with North Korea.

For its part, the North Koreans insisted this test was a "self-defensive measure" caused by "continued hostility" from the United States.

According to the BBC, the United States and China were both formally notified that North Korea were planning another nuclear test, but weren't told when such a test would take place.

The test is the first carried out under new leader Kim Jong Un, who took over little more than a year ago after the death of his father, Kim Jong Il.

The blast comes just days before Kim Jong Il's birthday and was seen by many Korea-watchers both as a sign of honor by son to father, as well as a challenge to political transitions taking place across the globe, and the region. In Japan, Prime Minister Shinzo Abe has just taken over, while Park Geun-hye is preparing to take over in South Korea. President Barack Obama will deliver his first State of the Union address of his new term Tuesday night and, in China, Xi Jinping continues his own transition of power.

“How Xi chooses to respond will be an important early signal of his foreign policy priorities and whether he is ready to cooperate much more openly and fully with Washington and Seoul than his predecessor,” Jonathan D. Pollack, director of the John L. Thornton China Center at the Brookings Institution, said to The New York Times.

It will be days more, at least, until scientists can tell more about the blast: Was it a success? Has North Korea managed to miniaturize its weapon, sufficiently so that it could be mated with a missile? Perhaps most crucially, was this blast, which did seem to be more powerful than either of North Korea's previous attempts, a shift from the more crude plutonium bombs that the nation used earlier to a more sophisticated enriched uranium construction?