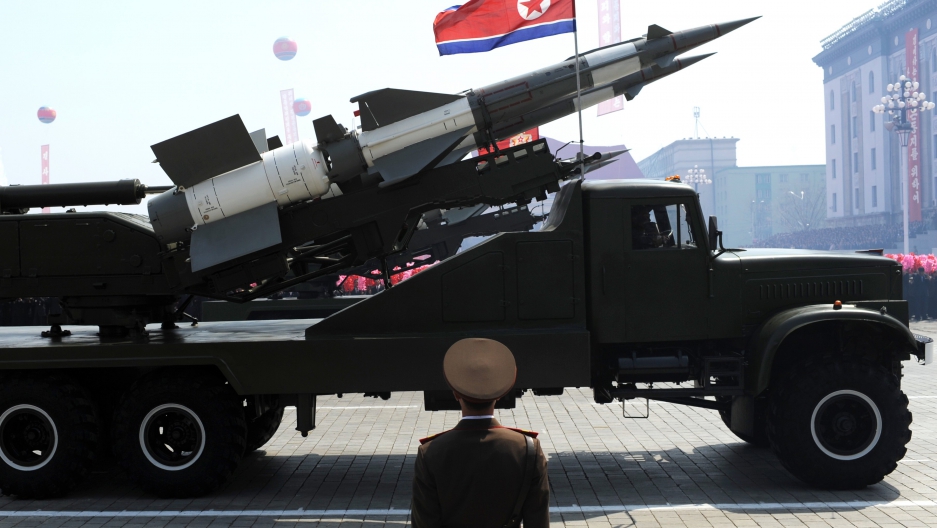 A missile is displayed during a military parade to mark 100 years since the birth of North Korea's founder Kim Il-Sung in Pyongyang on April 15, 2012.
Credit: Pedro Ugarte
Share

BOSTON — Kim Jong Un detonated a nuclear weapon at North Korea's Pungyye-ri test site on Tuesday. The test appeared to be more successful than the two previous explosions. And it involved a "lighter nuclear device with greater explosive force," according to North Korea's news agency.

So why does this latest test matter, and is the world really more dangerous today than it was yesterday?

GlobalPost asked global security expert Dr. Jim Walsh, one of a handful of Americans who has traveled to Iran and North Korea for talks with officials about nuclear issues. Dr Walsh is a Research Associate at the Massachusetts Institute of Technology’s Security Studies Program (SSP), and a scholar at MIT's Center for International Studies.

This interview has been edited for clarity and length.

Why does North Korea’s nuclear test matter? Why should Americans care?

Let’s not give North Korea more credit than it deserves. The test is not a game changer. But yes, the world is more dangerous today than it was yesterday, in two ways.

First, it appears North Korea has made a decision to build long-range rockets and miniaturize a nuclear warhead, small and light enough to be carried by a missile. They haven’t achieved that yet, and they may never get there, but they’re trying. Today’s test was a step in that process.

We’ll know a lot more about the test in a week, once data from aerial sniffers reveal what material was used. Was it plutonium, which they’ve detonated before? Or was it highly enriched uranium, or a combination of the two?

Second, the four leading regional players all have new leadership: China, North Korea, South Korea and Japan. So there’s lots of uncertainty. The test plays into nationalist sentiments in Japan and elsewhere. It’s dangerous to have provocations when you have lots of inexperienced leaders at the same time, where things might get away from them and end up in a spiral that no one actually wants.

What does this say about Kim Jong Un? What does he hope to achieve from detonating a nuclear test? Initially there was some speculation and some hope that he would be a reformer.

The truth is, we really don’t know. There’s not much humility when people analyze North Korea. But it’s important to remember we know very little about it.

That said, you could imagine that he has lots of reasons for conducting the test.

You’re right to say that we’ve had mixed signals from him. This is a guy who had Disney-like figures at shows that he attended. He admitted that their first missile test had failed; We’ve never had that kind of frankness before. He’s more public, and has talked about reenergizing the party, which has been dead for years. Yet there’s also this rhetoric, as well as the rocket and nuclear tests.

It’s hard to put it all together.

He’s newly installed, so he gets credibility for this. He can claim that North Korea is more advanced than South Korea. Yes, South Korea has a bigger economy and better military, but the North has had nuclear tests and South Korea hasn’t. This may be a way to buy support from the military in a country whose slogan is “military first.” I assume that his main goal is to hold onto power.

So if Kim Jong Un is indeed a reformer, he has to find ways to foster change without causing a revolt. That means taking power away from the military or putting his own people in the military while he builds up the party. He probably wants to enact economic reform, because he doesn’t want the country to crash and burn.

They’ve tried that before and messed it up so badly that, during the currency reform, an official was shot. Economic reform in a totalitarian state is tricky business.

What are the Obama administration’s options for responding to the test?

On the other hand, Obama’s critics, mostly on the right, argue that the president’s policy has failed so let’s do more of it, i.e, more sanctions. So I don’t expect much to change here. I think both sides are sort of dug in.

Sanctions will never force North Korea to collapse because China will never let that happen. It doesn’t like North Korea, but it doesn’t want a collapsed state on its border.

In recent weeks China urged North Korea not to go ahead with the test, but Kim Jong Un went ahead with it anyway. What does this say about the China-North Korea relationship, and how is Beijing likely to respond?

China’s going to react negatively but it’s got to walk the line. If it doesn’t respond it will look weak in the face of its recalcitrant friend. But if it tries to enforce some penalty and North Korea responds with more provocation that will also make China look weak.

At the end of the day, if there’s going to be diplomacy that leads us down a different path, China will need a really good relationship with North Korea. China’s the only one in the six-party talks that can guarantee that North Korea will get what it has been promised. If North Korea doesn’t trust China the six-party talks become five against one and there will be no hope for a diplomatic resolution.

For China, the North Korea problem is only going to get worse. I don’t know what they’re going to do. But the options are not good.

The international community’s hands have long been tied militarily because North Korea’s  artillery poses an imminent threat to Seoul. Is there a strategic option for surmounting this predicament?

I don’t expect North Korea to launch a suicidal attack on South Korea. The South Korean military is better than the North’s, even without having the US as an ally. North Korea would lose any war decisively, but you’d have a big hole ripped into South Korea, and that’s enough to deter a South Korean preventive strike.

War happens because someone miscalculates, adopts military doctrines that leads to escalation - that’s how you get conflict, and I think there’s a chance of that.

For the most part these are separate stories with separate groups of actors driven by different things. You know how I said China could at least in theory guarantee things for North Korea? There’s no player like that for Iran. There’s no one who can step in and guarantee that Iran will get what it needs out of an agreement, because everyone hates Iran.

What’s more, the crux of the problem is different. Iran had a nuclear weapons program, and shut it down in 2003. Now, it has a very active enrichment program – more active than it would need – but it has not made a decision to build a nuclear weapon, whereas North Korea has clearly built nuclear devices.